Long before it was time to get up I heard the rain beating down on to our cabin.  It did not sound good.  When, eventually, it was time to get up the rain still poured out of leaden skies.  It did not take a genius to work out that it was not going to be a good day, weatherwise, but just to make sure I logged on to a Kiwi weather site to find out that it was going to rain all day and that the strong winds would increase to gale force during the afternoon.  Oh joy!  To add insult to injury, the top temperature would be 12°C.  Oh double joy!

Undeterred, we wrapped up warm, bundled camera, waterproofs and ourselves into the car and headed west along the road we had travelled the night before.  We were headed towards Curio Bay where there is a fossilised forest, which shows at low tide, low tide being at about 10.00am.  We had heard that there are some Yellow Eyed Penguins nesting in the soft cliffs above the petrified forest.  Penguins in a zoo are one thing but in their natural habitat they are particularly exciting.  The cliffs above the beach were exposed to the full force of the weather and, as we were taking lenses and tripod down, as well as the camera, I was a little concerned that water could get anywhere into the camera and do damage.  However, I was not going to miss this opportunity. 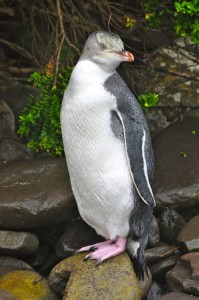 As soon as we dropped down on to the petrified forest with patches of large, orange and slippery seaweed, we saw our first penguin, standing in the open with his back to the elements.  He was close to the shrubbery adorning the sandy cliffs, standing guard over his partner tending the nest under a bush.  He looked beautiful and pathetic at the same time as the rain and wind lashed at him.  He did not seem to mind our presence as we stood just a few feet away, taking photos and getting very wet ourselves.  All along the edge of the cliff are traps set with chicken eggs to entice predators, like the stoat and rat, rather than them predate the endangered penguin population. 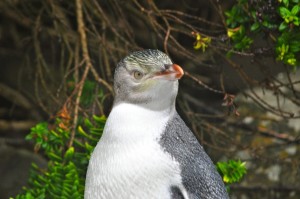 Further along the beach were two more, both standing in the open, with flippers out-stretched.  Again they were not perturbed by our presence.  However, not wishing to outlive our welcome with them, and also because we were getting wet, we moved away.  Angela retreated to the car for shelter while I found another penguin, this time standing out in the open on the shelf that is the fossilised forest.  This time it would appear that I did get a little too close and the penguin waddled off, walking as if he had something nasty in his pants. 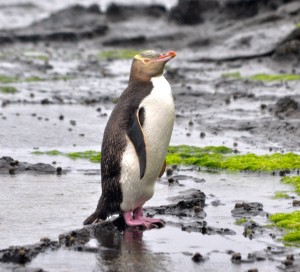 On the headland between Curio Bay and Porpoise Bay we found a shack selling hot pies.  Hot pies for breakfast?  Why not?   From this vantage point we could look down at the sea battering away at the fossilised forest of Curio Bay and the long sweep that makes up Porpoise Bay, where in better conditions we might see Hector’s Dolphins cavorting in the blue water along with surfers.  However, not today for either, I am afraid. 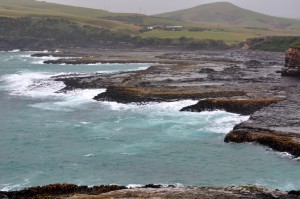 From here we headed further west to Slope Point, the most southerly point on New Zealand’s South Island.  Here, the weather was so bad we decided not to get out of the car but to head back east to call in at the Niagara Falls café at Niagara Falls.  Yes, I mean what I say, although no matter how hard I looked I could not see any waterfalls.  Lunch was in the old school room, converted to a café and craft shop.  It was a pleasant respite from the weather outside.

We had intended to stay out until about 4.00pm but warmth and dryness soon tempted us back to the cabin shortly after lunch.  A good opportunity to catch up with the blog and bring it up to date.  Enjoy.

Angela is snoozing with the electric blanket on but wants you to know that she loved the penguins!

Leaving Queenstown on a bit of a dreary morning, we headed south in search of some sunshine.  We have revised our itinerary a little and decided not to go up the west coast after we have been to Dunedin and the Otago Peninsular but to precede that with the Catlin coast to the south.  As we left the mountains the weather began to show signs of brightening up and by the time we reached the south coast at Invercargill there were some decent blue patches of sky.

Invercargill is not an impressive town and looks as if it might fit in better in the mid-west USA with its wide streets and two storey buildings with facades that resemble those towns, which have not yet climbed out of the first half of the twentieth century.  Not overly impressed with what we saw we passed straight through and went out to Bluff, past the decaying portside industrial area to the John O’Groats of New Zealand.  Here we found an end of the world café that served up some excellent food (unlike anything I have experienced at John O’Groats). 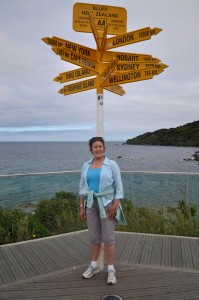 Following lunch we took a walk along the cliff edge, affording us views of distant Stewart Island, before returning to the car and the obligatory photo at the signpost.

Heading east, the coastal area is very flat with marshy wetlands preventing you from getting too close to the shore.  By the time we reached Fortrose the landscape was becoming more interesting and we took the scenic route, which although it did not hug the coastline, it gave us plenty of opportunity to take little detours to bays and headlands along the way.  The first of these little detours was at Waipapa Point.  On the point is a lighthouse built in 1884, three years after New Zealand’s worst maritime disaster when The Tararua was wrecked with the loss of 131 lives.

However, it was what was languishing on the beach that took my attention, a lone bull sea lion lazily scratching himself with his flippers.  It seemed not to mind that I was nearby; it is only when young are about that they might become aggressive.  Further along the beach I came across three more, including a lighter skinned youngster, who was still pretty large.  They were quietly dozing on the beach without a care in the world. 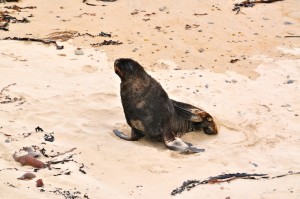 Continuing east we called in at Curio Bay and Porpoise Bay with the dual intention of taking in the scenery and also looking for somewhere to stay for the night.  Our journey along this coast so far had revealed that places to stay were few and far between and I was beginning to get a little anxious that we might have to drive much further than I intended.  The coastal areas became more hilly and forested.  Just by chance we came across the McLean Falls Holiday Park with its Whistling Frog café and bar.  We managed to secure a very comfortable chalet for four, with all facilities.  Over an excellent meal of lamb cutlets and a bottle of red wine we decided we would stay for two nights and use our chalet as a base for further exploration.

Back on the road we chatted about our trip thus far and agreed that we were having a superb time even if the promise of a New Zealand summer was eluding us.

We ate more delicious seafood at Bluff, enormous mussels (I know John has!) scallops and prawns.  They have an annual Oyster Festival in May, oops missed that then, shame.

I was thrilled to see a massive bull sea-lion on the beach.  He seemed stuck to the sand by his rear quarters, happy to rear up on his front fins and peer around before languidly scratching himself then flopping down to rest again.

I am happy to be ensconced in a comfortable cabin with heating AND an electric blanket.  The wind has reached gale force, temperature is 12C (the same as UK apparently!) Cosily catching up with blog, reading, writing postcards and completing puzzles. 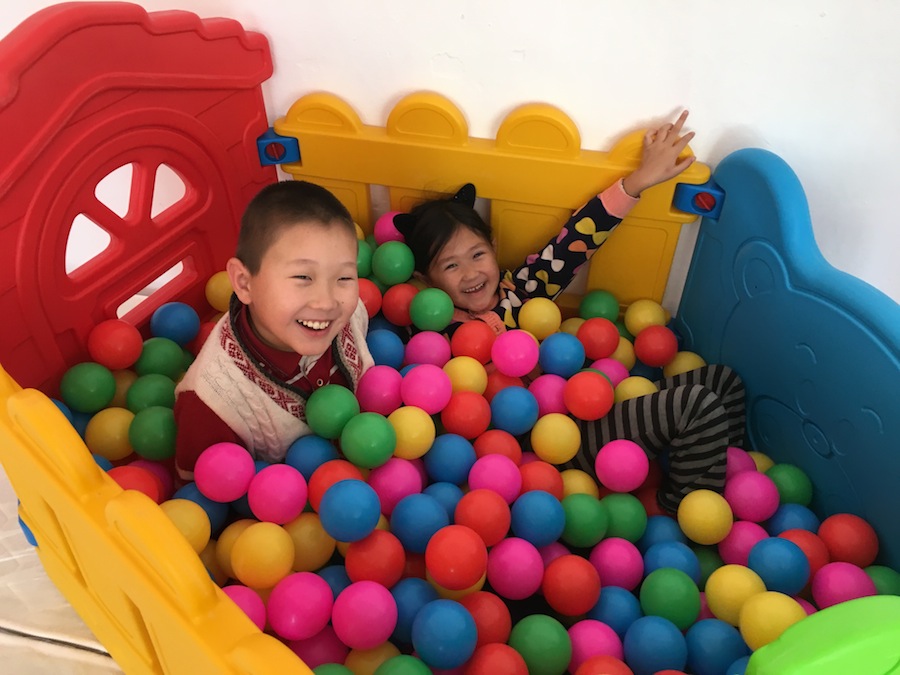 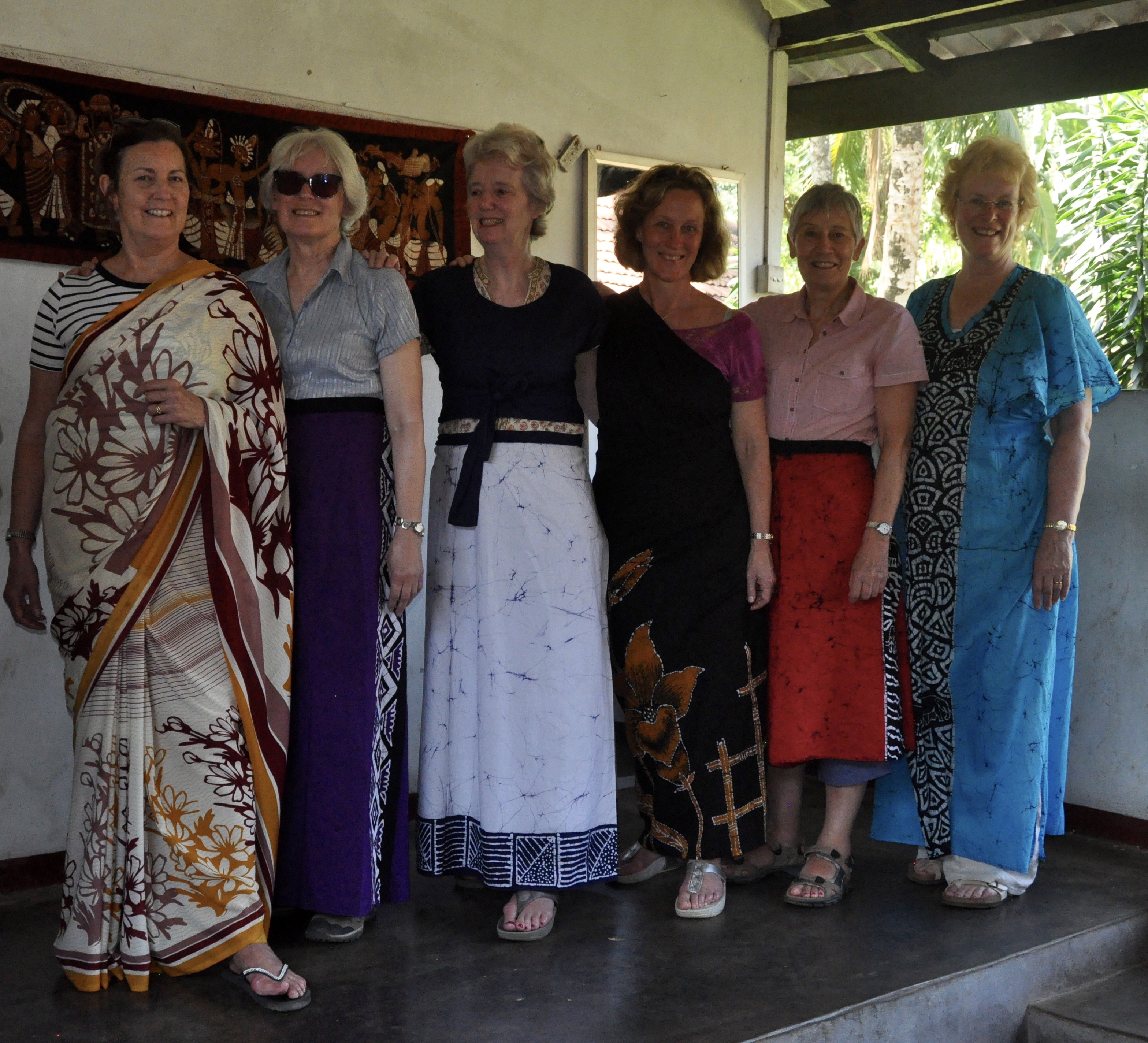