Project for the summer of 2016 – Naryn, Krygyzstan 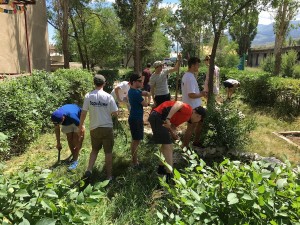 The King’s School Himalayan Club  travelled to Kyrgyzstan during the summer of 2016. To satisfy our need to have a community project embedded into the itinerary, we  developed a link with two centres in Naryn supporting children with disability, families and single mothers. The first, called Aruu-Telek, is a government run home where children stay for short spells and where victims of assault can seek refuge. There are 15 children and 14 women in the centre. They received a carpet, mattresses, a treadmill, ball pit, a television, and a washing machine. While we were there we worked in three groups, gardening, making up the items we had brought and making flags to adorn the entrance to the centre. 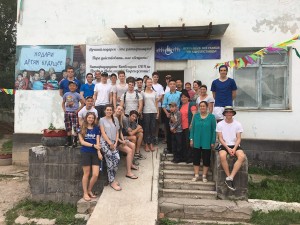 With the children and staff at Kadan

The second home we visited was Kadan, a day care centre where children with disability go to study each day. The children have a variety of disabilities from cerebral palsy, Down’s syndrome  as well as a variety of other disabilities. The centre caters for about 100 children and relies entirely on donations from from NGOs and humanitarian projects. They received  a projector, a sensor TV and kitchen equipment, shelving, toilets, mattresses and a carpet. As well as playing with the children we divided ourselves into working teams and built the kitchen units and shelving. With hardly any tools and all the instructions in Russian made it all the more interesting but the group rose to the occasion and did an excellent job.

One project that is on-going is “Share the Vision”. Below is a brief description of what it involves.

Share the Vision, a project enabling blind and visually impaired young people to venture into remote mountainous regions, was formed in 2006. I made an approach to NCW, a college for the blind in Worcester, and suggested that some of their students might benefit from teaming up with sighted students from King’s School Worcester and going trekking in Morocco. The idea was welcomed and we set about finding students from both schools who could work together and all benefit from the experience.

What followed proved to be a voyage of discovery for everybody concerned; the blind and visually impaired discovered that there was more they could achieve than they appreciated, given the opportunity, the sighted students discovered that disability is not a barrier to friendship and that with their eyes their partners could achieve a great deal, and the staff were inspired by the work, attitude and achievements of the young people in their charge. 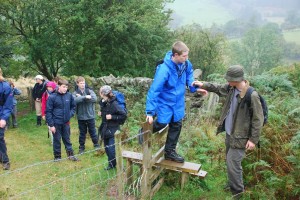 Training in the Black Mountains

The blind students had to learn to cope with the confinement of living in a tent. The staff had to create a structured training programme, gradually increasing the physical demands so that they were well prepared for the mountains of Morocco, which are significantly higher than anything we have in the UK. Dotted between the physical, outdoor training were visits to restaurants and other social occasions so that the two sets of students got to know each other in a variety of situations. 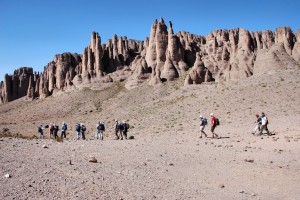 Trekking in the Jebel Sahro

That first trip to Morocco in 2007 involved a significantly difficult trek in the Jebel Sahro, achieved by all, and this was followed up with a trek in the Sahara Desert where the opportunity to ride camels was experienced. In both environments it was important that the sighted students used their linguistic skills to create pictures in the minds of their charges. The scenery and landscape was so different to anything we have in the UK, it was not that difficult. The most dangerous aspect of the whole trip was coping with the rather lax adherence to the rules of the road in Marrakech, particularly in relation to pedestrians. 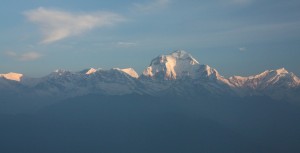 The overriding outcome of that first trip was that it had been a huge success and that it was worthy of repetition, not to Morocco on the next occasion, but to Nepal in 2009.  Here, we were embarking on a trek in the Annapurna region. While our highest point was to be 3200m, we would have a wall of snow-capped peaks in front of us rising, in some instances, to more than 8000m.  This was a hugely rewarding experience and listening to the descriptions of the sunrise over the Himalaya being relayed to the blind students on top of Poon Hill on a chilly April morning is something to be treasured. 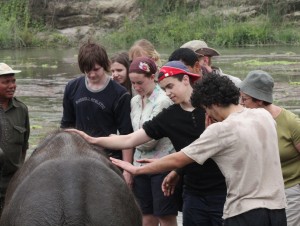 Close encounters with a baby elephant

It is important on these trips that other senses come into play to compensate, in part, for the loss of sight. That is why, having completed the trek, we travelled to the hot, sticky south of Nepal, to the Chitwan National Park, to encounter elephants, to ride on their backs looking for other giants of the jungle, rhino and the ever elusive tiger. Sadly the tiger remained elusive but we did see rhino. The highlight, though, was going down to the river with the elephants to bathe them. Here, all students could get involved in throwing water over these wonderful animals, stroking them, appreciating their leathery skin, feeling their wrinkled trunks and being sprayed by them, understanding how gentle these giants are and feeling confident in such close proximity. Sighted or not it is a fabulous experience and one that will remain with us forever.

Kathmandu traffic was even more scary than Marrakech but we found a safe haven in medieval Bhaktapur, a traffic free city to the east of Kathmandu where the students enjoyed touching many a statue and mixing with the local people who were very welcoming and sympathetic. 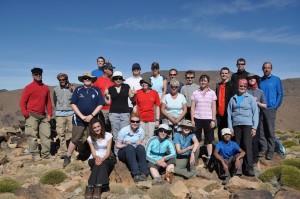 In 2011 we returned to Morocco for a trek in the Anti-Atlas Mountains where we successfully climbed a peak of 2900m. This was a remarkable achievement in extremely difficult terrain, considering the nature of the group, a steep slope of loose and wobbly rocks the size of dinner plates, but the guides approached it with optimism and enthusiasm while the blind and visually impaired approached it with determination and grit. Everybody dug deep and all made it to the summit. 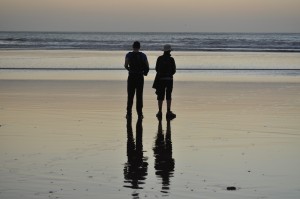 Learning from our experiences in Nepal, we included a proper camel trek this time, not in the Sahara, but through the Argon Forest and along the Atlantic coast of southern Morocco.  To feel the camel, to learn of its features through touch was important, but it was also a relief to dismount occasionally, to let somebody else learn and understand the discomfort of riding a camel. Camping on the beach with Atlantic waves crashing on the shore, of students playing freely at the water’s edge, songs round a campfire are treasured memories, not just for me but for all involved. 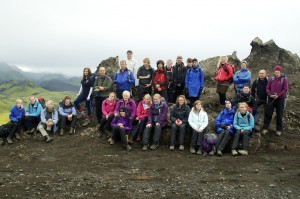 Enjoying the summit of an Icelandic peak

The more we did this the more we wanted to try. With this in mind we travelled to Iceland in 2013. This trip lacked that personal experience with animals but more than made up for it in other ways. Here we had thunderous waterfalls, geysers, pools of sulphurous, bubbling mud, hot springs to wallow in when the outside temperature struggled to reach double figures, glacier walking, white water rafting which included a ‘leap of faith’ from the top of a 7m cliff into the river below. And then there was the trek, an unbelievable experience walking over lava fields, across volcanic deserts, wading across roaring rivers, feeling the wind and the rain on our skin and, oh yes, climbing a mountain or two. Iceland has it all and that is why we are going back there in 2015 to do it all again and to add caving to the list.

In an age of risk assessment and risk aversion you might ask why we do it. Yes there are risks involved and that is why we plan and prepare thoroughly. However, the rewards far outweigh the risks.  The reward is a blind student telling me that they never realised just how much they could achieve and now they want to do more. The reward is a visually impaired young man telling me that he has been able to see stars for the first time in his life because the air is so clear. The reward is seeing friendships develop and blossom beyond the trips. The reward is achieving the seemingly impossible.

Although I am no longer directly involved in the trips, I am optimistic that the two schools will find a way of making this work, and that they continue to push the boundaries for blind and visually impaired young people through adventure. 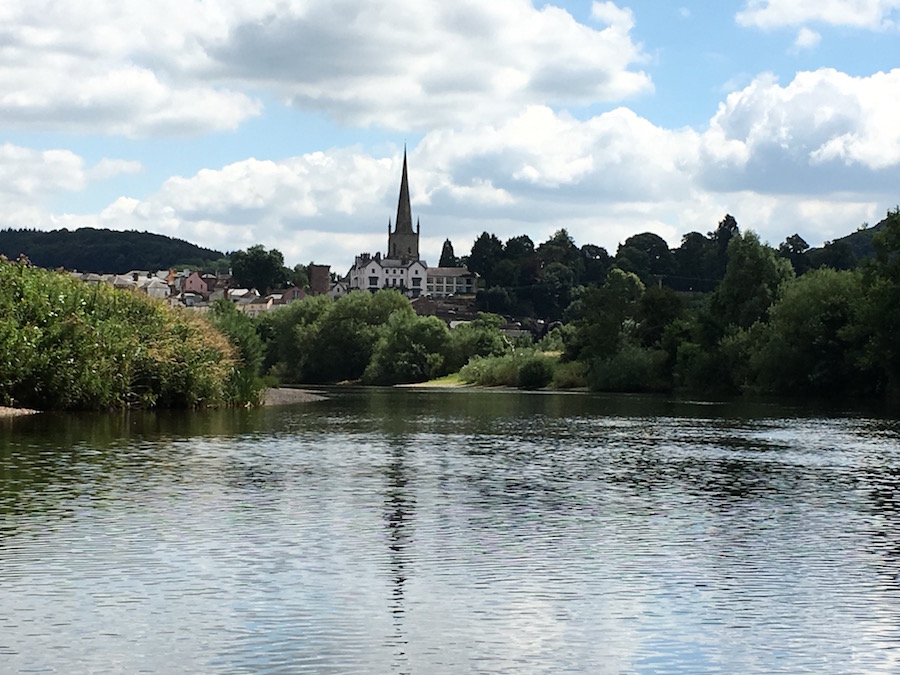