Our journey from Akaroa to Lake Tekapo took us via The Store @ Tai Tapu for yet another super coffee, and something sweet. It doesn’t matter where you go in New Zealand, however remote you are, there are always coffee stops of the highest quality. The route took us across some unusually flat, agricultural land running parallel with the coast, before heading inland to the town of Geraldine, where we stopped for a bite of lunch at Cafe Verde. This was another occasion where the food surpassed expectation, although Cafe Verde does feature in many guide books. 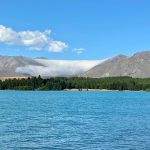 On reaching Lake Tekapo, we just had to stop at the first opportunity to take photos along the length of the lake towards the Southern Alps. The colour of the water is so dramatically blue, it is mesmerising. There was also a fascinating cloud formation on the hills to the east of the lake. There must have been a temperature inversion, because the cloud was floating over the top of the ridge and down the slopes, filling in any nook and cranny as it did so. There was virtually no other cloud to be seen but this hung there all day. 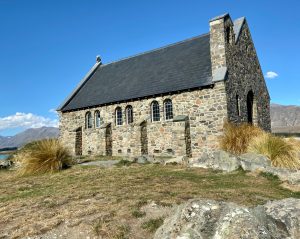 In Tekapo village there is a special church on a slight rise above the lake, the Church of the Good Shepherd. Because of its position and the beauty of its surroundings, it has become a popular tourist spot, which spoils it a little. Unfortunately, when we arrived the church was closed but we were still able to walk around it. Behind the altar the window is made out of plain glass rather than the traditional stained glass. The reason for this is that the natural view of the lake and mountains cannot be improved upon with stained glass. It has become a top spot for marriages in recent years. 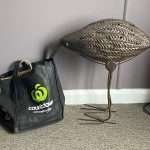 Our accommodation in Tekapo was in traditional wooden bachs, small and functional with an outside toilet, albeit just the other side of the porch. Despite the fact they were small, they had everything you could possibly need, including a rather inquisitive ornament that seemed to be very interested in what we might be hiding in our shopping bags. They also had a view across the grit road and along the lake towards the mountains. 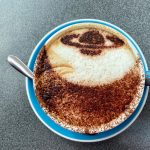 The following morning we took the short drive up to the summit of Mt. John for views looking down on the lake and along it towards the high mountains. There was a layer of cloud overhead, but we had every confidence that it would clear as the temperature rose. Mt. John has an observatory on the top with several telescopes pointing skywards. At night they do tours with an opportunity to observe the night sky. I had decided not to do this as I read that there was a fair bit of hanging around and waiting while others looked through the telescopes. It also relied on there being clear skies, a risk I was not prepared to take when I was booking things. The cafe on the summit gave us another great coffee!

We then ventured up the lakeside as far as we could go, before returning to visit the airfield to see what the chances were of taking the Mt. Cook scenic flight. There was still a fair bit of cloud about but they believed the forecast that suggested it would clear by early afternoon. We should return then.

Anticipating an early afternoon flight, we had a snack lunch on the lake shore before heading back to the airport. Angela was not joining us on the flight but would explore the lakeside observatory while we were gone.

By early afternoon the cloud had cleared and we were set to go. The flight took us the length of Lake Tekapo, allowing us to drink in the views of the blue water. At the end of the lake, where the mountain rivers flow into it, we were treated to some amazing aerial views of braided rivers of blue between silver banks of glacial silt. I don’t think I have ever seen anything like it and it was absolutely beautiful, nature’s art. 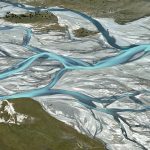 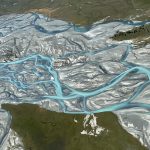 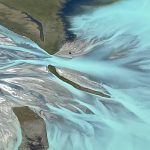 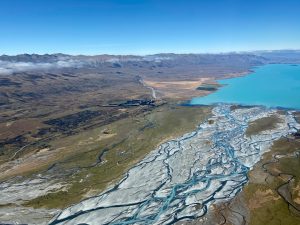 Leaving the lake behind us we headed into the mountains, jagged black peaks to begin with, but eventually snow capped mountains. The earlier cloud had drifted off to the west and we could see it in a blanket on the far side of the range. While the glaciers looked pristine with a blue/white hue, the snowfields on the upper slopes were beige. This, it turned out, was a new phenomenon, them having recently been covered with ash from the Australian bush fires. At one point we could see a helicopter that had landed on the snowfield. We were not that far above the mountains but it looked minute against a backdrop of snow.  Wherever we looked it was a sea of jagged, snowcapped mountains and in the middle of it all was Mt Cook, at 3724m is New Zealand’s highest peak. We flew around the summit so we could all see it from every angle. 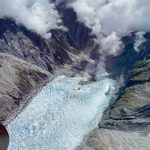 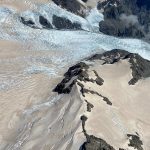 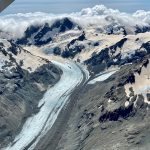 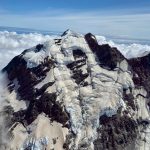 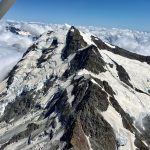 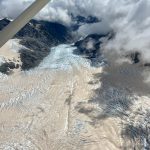 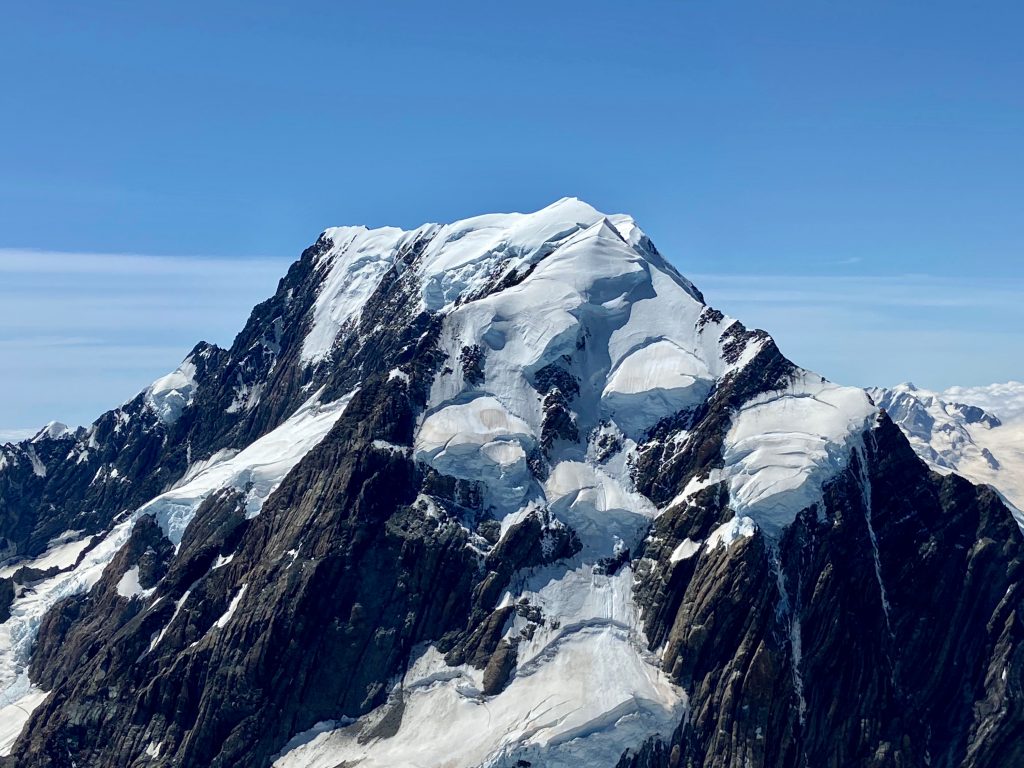 All too soon, we began to head back but it was a really memorable experience and one I would recommend everyone to take if the conditions allow. 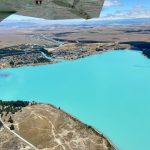 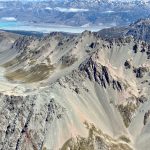 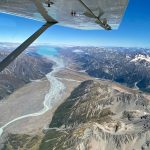 Angela met us when we landed and we set off on the short rive to Twizel and Lake Pukaki. Having checked into our house, I suggested we take a drive along the shore of the lake towards the village of Mt. Cook.

Lake Pukaki is longer than lake Tekapo and it took us over an hour to reach Mt. Cook village, although we avoided going into the village as it is a customised resort for skiing in the winter. Instead we walked up to a memorial cairn for all climbers killed on Mt. Cook and the surrounding peaks. This provided us with a view along the Hooker Valley to west side of the Mt. Cook. 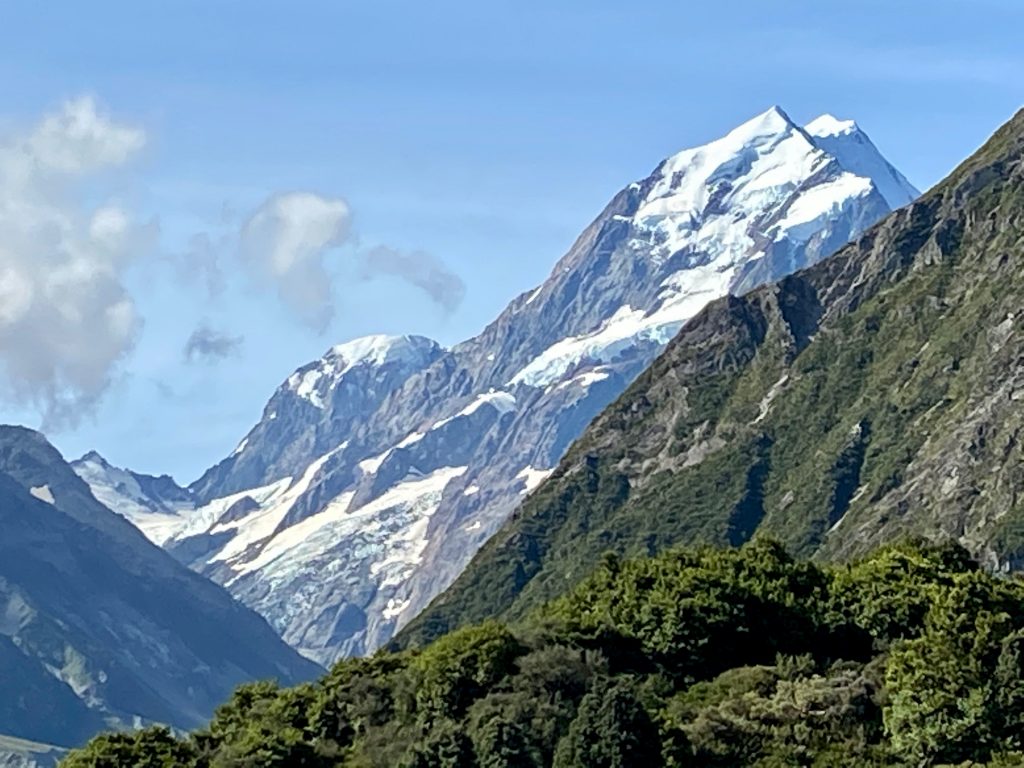 We then drove round to the other side of the ridge coming off Mt. Cook to climb up to a view point that overlooked the Tasman Glacier and terminal lake as well as the eastern side of Mt. Cook.

We were so lucky to have seen Mt. Cook from just about every angle, from above and each side. It is the best I have ever seen it in several years of trying, and it has given me the impetus to want to explore it further, with a walk up the Hooker Valley, and more.

Hopefully, the photographs will say more than words can.