It was necessary to rearrange some of the activities for this last couple of days because John and Chris had made changes to their return to the UK. The Coronavirus seemed to be gathering pace across the world, and John felt he needed to get back sooner, and via a safer route, in order to manage his business. As a result, I had arranged for them to enjoy the albatross experience a day earlier. 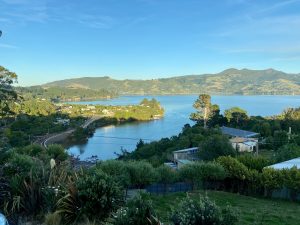 We arrived at our house via a very steep drive. It was perched high, overlooking the harbour inlet leading to Dunedin. As with so many of our houses, we had super views from the house and the deck. It wasn’t entirely suitable, as Chrissie’s room was in a wooden annex in the garden, ideal for a couple of teenagers, but not for a lady of style. Nevertheless, she was prepared to put up with sleeping in a shed!

While John and Chris enjoyed the albatross experience, I organised fish and chips for everybody so that we would be ready to go back to the Albatross Centre, later in the evening, to watch the Little Blue Penguins coming ashore after a day’s fishing. The fish and chip shop is run by a very amiable chap with a good sense of humour. This can be seen by the various notices he has around the place. 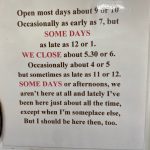 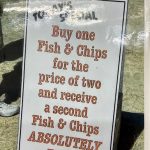 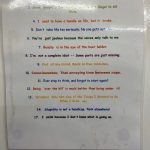 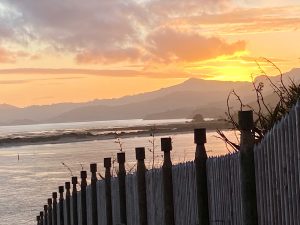 We arrived at the centre just as the sun was setting. By the time we had had the introductory talk and we were ready to go out on to the viewing platform is was dark. The viewing platform is just above the beach where the penguins land. They tend to arrive in small rafts, which is as a group, plopping on to the beach as a wave breaks. Having landed they tend to stand there and survey the scene to make sure it is safe. Behind us the chicks are beginning to make a noise from their burrows, in anticipation of their parents feeding them. But the Little Blue Penguins do not seem to be in a great hurry. They take time to shake themselves, preen their feathers a little, gradually making their way into to dunes. 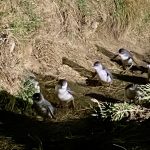 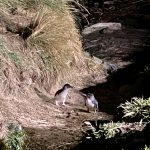 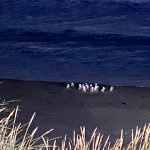 The thing that is so striking about them is their size. They are so little, standing less than a foot tall. Creatures that are so sleek and quick in the sea look ungainly as they waddle up the beach, but they are beautiful.

While Chris and John spent the morning packing, Angela, Chrissie and I went over to the other side of the peninsula to Allen’s Bay, a beautiful beach frequented by sea lions. It was a perfect morning with not a breath of wind. The reflection of the hills in the waters of the lagoon were perfect.

Whenever I have been to this beach before I have only seen mothers and pups. The pups usually hide in the sand dunes, waiting for their mothers to return from fishing trips. It is best not to go rooting around in the dunes as it is very easy to disturb the pups, but, also, it would be easy to come across an adult that would not be quite so cute. 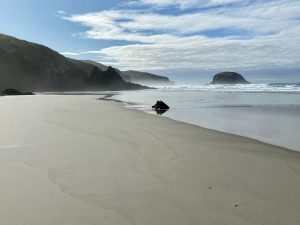 As soon as we emerged on to the beach we were in luck. A large bull sea lion had just emerged from the sea and was slowly making its way up the beach. He was in no hurry but was content to roll around on the sand. We always maintained a safe distance, perhaps 10m between us. That way it does not cause alarm. However, when that 10m is further up the beach, possibly close to the direction the sea lion wants to go, it can cause some alarm. In this instance the alarm was to Chrissie and me who decided to move out of the way as our docile sea lion decided to briefly run up the beach, if you can call it running. I don’t think we would have been harmed but it is better not to find out.

As we walked along this most beautiful of beaches, we kept coming across lone sea lions relaxing on the sand, often wrapping themselves around some seaweed. They do know how to relax, waving the odd flipper in the air as they wallow in the warm, morning sunshine. 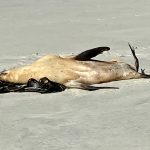 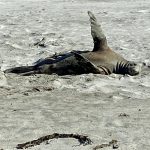 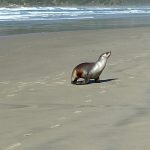 The most exciting experience of the morning was spotting a female emerging from the sea. To begin with she wallowed in the shallows, rolling from side to side. Standing up, she would waddle a little further up the beach, her body glistening in the sunshine. She had two noticeable and significant scars on her abdomen, which must have caused her some concern in the past. After a while she would lie down and stroke her face and chin on the sand, gradually extending it to a full body rub. Here the sand was firm so not much transferred to her wet skin. After a while she would waddle further up the beach, her skin shimmering in the light. Again, she would stop for more luxuriating on the sand. Eventually she would make it into the sand dunes where her pup would be waiting to be fed. Watching this was very special.

Leaving the sea lions, we returned to the house to pick up Chris and John and take them to the airport. I dropped Angela and Chrissie in Dunedin for a mooch, while I continued to Dunedin Airport. We had had a great adventure together and I really appreciated their company throughout. Not easy saying goodbye when you have shared so many experiences.

Back in Dunedin, I met up with Angela and Chrissie. I had arranged for us to go to the Yellow-Eyed Penguin Sanctuary. First we needed to pop back to the house. Panic! Chrissie could not find her pouch containing her passport, money, credit cards, everything that is essential when travelling. We searched high and low but there was no sign. The only conclusion I could come to was that Chris and John had mistakenly swept them up into their luggage. They had done their luggage sorting in the lounge where Chrissie had left her pouch. Text messages and phone messages ensued and eventually we learned that what we thought had happened, had happened. John arranged for Chrissie’s pouch to be left at a desk in Auckland Airport for Chrissie to pick up.

As a result, we were a little late arriving at the penguin sanctuary. The only penguins we saw were those in the hospital, hopefully recuperating sufficiently to be released again into the wild. Although we walked around the sanctuary, we saw no other penguins. I talked to our guide and referred her to the fact that when I first visited New Zealand, less than ten years ago, I saw so many Yellow-Eyed Penguins along the Catlin coast and the Otago Peninsula. Now they seem to be very scarce. In such a short time they have become an endangered species. Experts maintain that there will be no more Yellow-Eyed Penguins, other than any in captivity, in ten years time. That is devastating! They have become victims on so many fronts. 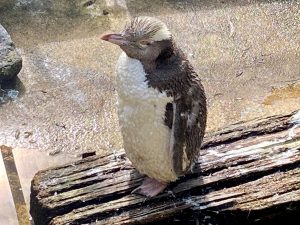 They have been terrorised by tourists who see them as playthings. Because their nest are on the ground amongst bushes at the edge of beaches, they are too accessible so their usual nesting grounds are no longer safe. Global warming has meant that they have to go further out to sea to find their staple food. Their favourite food is blue cod, which has been over fished so it is harder for them to come by. They are solitary fishers, unlike the Little Blue Penguin, which fish in groups, so they have become vulnerable to predators on both land and sea. Their nests get raided by stoats and ferrets, dogs attack them on the beach and sharks, seals and sea lions eat them at sea. It is not easy being a Yellow-Eyed Penguin and it will be extremely sad when they disappear. 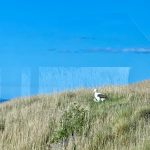 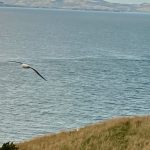 Our final visit of the day was to the Albatross Centre. The Otago Peninsula is the only mainland colony of albatross in the world. We were given an introductory talk on the life cycle and the way of life of an albatross. They are remarkable birds, spending so much time riding the thermals.

The talk over, we headed outside and up the hill to the hide overlooking the colony. There we saw adults sitting on their nests with a lone chick tucked safely underneath them. We saw youngsters squabbling and trying to assert themselves and, most strikingly, we saw these majestic birds gliding overhead and past us. They are an exceptional sight.

That was it. We had dinner that evening in the 1908 Cafe Restaurant. The next morning Angela and I dropped Chrissie off at Dunedin Airport. Another sad farewell. Then, with just two of us left, we drove up to Christchurch to drop off the hire car and catch our flight to Auckland. We spent a further three weeks in New Zealand with family while the Coronavirus took hold, and gripped the world. As we sit in lockdown back in the UK, and New Zealand has gone into its own lockdown, we can only reflect how lucky we were in seeing and doing all of the things we did. Everything has closed down and New Zealand, like the UK, and it is a very different place to the one we experienced just a short time ago. We can only hope that we get to grips with this pandemic, that the world, perhaps cautiously, returns to normal, and I can begin to consider New Zealand – The Best Bits 3.