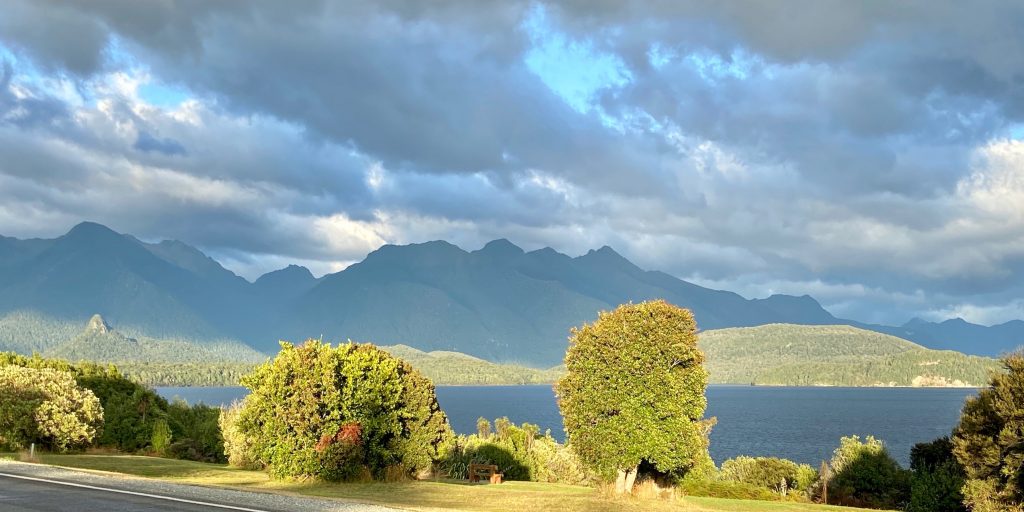 The day we left Manapouri was a mixture of sunshine and cloud. When the sun did shine, it cast a beautiful light on the trees and hills around the lake.

The south coast was a bit bleak. Gone were the golden, sandy beaches, to be replaced with grey shingle beaches. 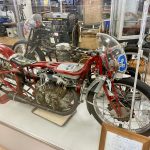 Invercargill is not the most attractive of towns and does not have a great deal of interest, other than one shop, E. Hayes and Sons, a hardware shop. It has a huge floor area and there is anything and everything a budding builder, either professional or DIY enthusiast, could want. It is more than just a hardware shop. It is a museum, particularly of motorbikes, cars, bicycles and Burt Munro’s Fastest Indian. 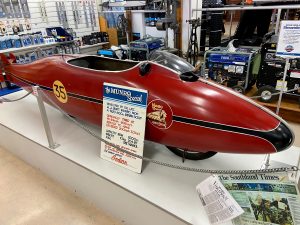 Bert Munro, a 68 year old resident of Invercargill with a heart complaint and a shoestring budget, had the ambition to achieve the land speed record on a forty seven year old bike with makeshift tyres, no brakes and no chute. All the odds were stacked against him, but his determination and indomitable spirit saw him set a world land speed record of 205.67 mph. The story was immortalised in the film, The World’s fastest Indian, starring Anthony Hopkins. His bike is the star attraction and for those who want to feel what it was like, there is a replica bike you can sit on. 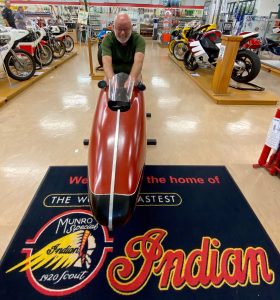 How did it come about? Storeowner Norman Hayes helped Burt get the materials he needed to modify the Indian. When Burt’s health deteriorated, Norman bought two of his bikes and all his parts to keep his motorcycling legacy in Southland. The store is now home to an ecclectic range of classic and vintage motorcycles, automobiles, engines, equipment and memorabilia which today makes up the E. Hayes Motorworks Collection.

Having drooled long enough, we headed out to Stirling Point in Bluff, the southern most tip of South Island. It was quite windy and the sea beyond the headland was choppy. We watched a fishing vessel rocking back and forth as it ploughed its way towards the harbour. Once past the headland it suddenly found smoother water. 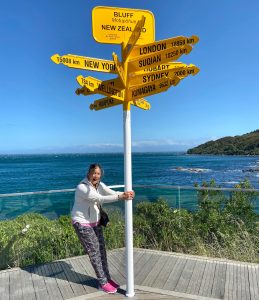 At Stirling Point there is the obligatory finger post telling us that London was a mere 18,958km away, a further 929km away than we were at Reinga Point. In the hazy distance we could just make out Stewart Island, an island that needs to be on my next New Zealand itinerary. There is a good cafe at Stirling Point, called the Oyster Cove, overlooking the headland, which provided us with an excellent late lunch. Sea Food Chowder!!! The cafe was for sale, as were quite a few of the cafes we patronised on our journey. If we were able, they would all be very tempting, but we were seeing them at the prime time of year. I suspect, like tourist venues at home, they will have their lean times. 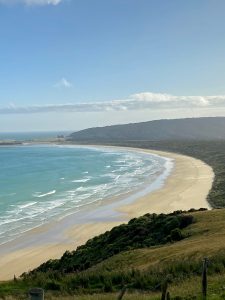 We had spent rather more time than I expected in Invercargill, so we felt the need to go directly to our accommodation at Papatowai, on the Catlins, without taking in any detours. The Catlins is a little visited area of New Zealand that boasts a dramatic coastline with long, sweeping beaches and rocky headlands, and tropical forests.

Our house for the night was tucked away at the end of a long grit road with beautiful views across the rolling hills and out towards the sea. It was a stunning house in a stunning location and my only regret was that we were only staying there one night and not using it as a base to explore the area in more detail. Perhaps next time. 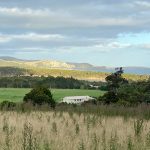 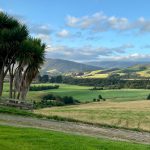 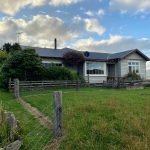 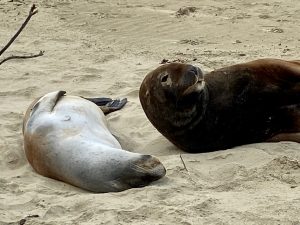 Continuing up the coast we took time to visit a beach at Surat Bay. I knew that we would likely see sea lions lazing on the beach. What I wasn’t expecting was to see pairs together on the beach. I had previously only seen bulls on this beach, understanding that they are banished while the females look after the young. It is always a ‘pinch me’ moment when you see these wonderful creatures. 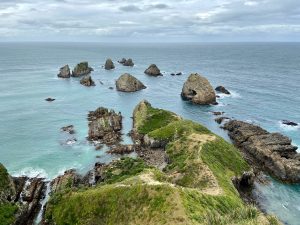 A little further along the coast we came to Nugget Point, a headland with a number of stacks off shore. It is a dramatic headland, particularly in a storm. Fortunately, the weather was quite placid, if not a little threatening.

Gradually we worked our way up the coast to Dunedin, but rather than going into the city, we diverted to the Otago Peninsula, our last destination on this tour of New Zealand.