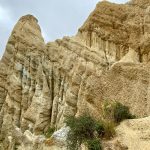 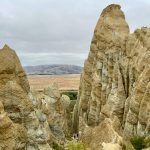 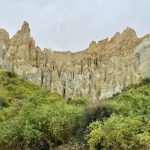 Leaving Twizel we continued our journey south but didn’t get very far before we had to make a stop for the clay cliff at Omarama. The cliffs are made up of a wall of pinnacles and pillars of rock separated by narrow gullies. It is believed that these rocks were a setting for the Lord of the Rings films. As they are on private land it costs $5 to take your car up to the car park. 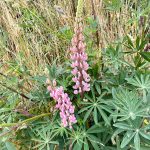 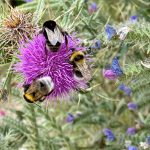 From there you walk up a lupin lined track to the cliffs. Initially, they look like a wall of yellow rock, but the track leads you steeply up to a gap. Passing through the gap you emerge into a strange world of baked clay with stones embedded in it. Clambering up the steep slopes of loose stones can be tricky in places and eventually you reach a point where you can go no further because of the impenetrable wall of clay. It really is a fascinating phenomena of geology. 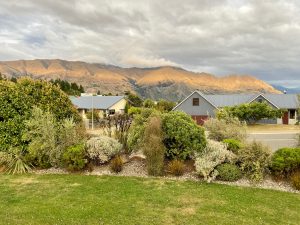 We reached Wanaka by mid afternoon and checked into our house on a pleasant estate. Although it did not have views of the lake, there were some impressive hillsides poking above the rooftops opposite.

It had been our intention to walk the Rob Roy Track leading up to the Rob Roy Glacier but we learned that it was closed for damage repair. This left us with a decision to make as to what to do as an alternative. The weather had taken a turn for the worse, and although it wasn’t raining in Wanaka there was some in the area. 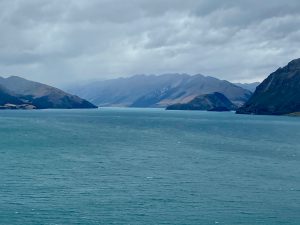 I decided it was worth us having a look at Lake Hawea and the upper end of Lake Wanaka, towards the Haast Pass. As we headed deeper into the mountains the weather looked more threatening, but still the views over Lake Hawea were rewarding. However, when we passed, what is known as The Neck, a narrow piece of land that separates the two lakes, it started to rain, and continued to do so the further up Lake Wanaka we travelled. At least the car was getting all of the dust washed off it.

It was time for a coffee. At Makaroa we found, at the side of the road, the Makaroa Country Cafe. Escaping the rain we walked in to hear a rather large lady berate a tourist for something he had not understood. Not wishing to get the same treatment, John and I disappeared into a corner and let the girls do the ordering.

It is a bizarre place that fulfils a number of functions. It is a a barn of a building and, yes it is a cafe. It is also a place where memorabilia can be displayed, largely national flags that hang from the rafters and car number plates that adorn the walls. It is also a shop that sells a variety of products including a “willy” shampoo that ensures your willy feels smooth and smells fresh! I resisted!

It was still raining when we left the cafe but we continued up towards the Haast Pass as far as the Blue Pools. These pools are reputed to be well worth seeing but I also know that blue pools look their best when there is a blue sky. Last year I took the group to the Hokitika Gorge, also having beautiful blue water, in similar conditions, to find the water a murky, grey. We decided not to get out but to head back to Wanaka, where there was no rain. 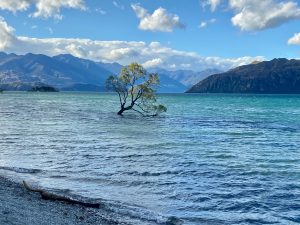 One of the most visited spots in Wanaka is the tree growing out of the lake. It is New Zealand’s most famous tree and is often referred to as ‘That Wanaka Tree’. It is a willow and is a pleasant walk along the shore of Roys Bay to get there. The reason it is so famous is that a hundred years ago it was a fence post. Having started out that way, it sprouted, set down some roots and has been there ever since, although some over-enthusiastic tourists have been know to walk out to it (the water is shallow enough) and climb it for the sake of a different picture. This wear and tear is beginning to have a detrimental effect on its well-being. 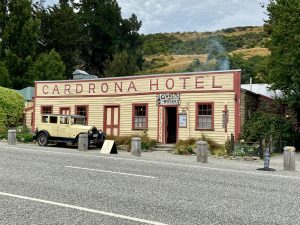 The next morning we left Wanaka and headed the short distance to Queenstown. En route we had to make a stop at the famous Cardrona Hotel. Just before we got there we passed the, now famous, bra fence. In about 1998 four bras appeared on a fence at the side of the road. The numbers grew until council officials removed them. More appeared , and when the total reached 200, they were removed again. There are mixed feelings about it. Some liked it as a tourist attraction, while others see it as an eyesore and a danger to traffic. It remains to this day. 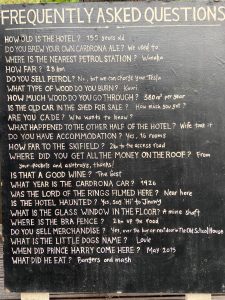 The Cardrona Hotel looks as if it would fit nicely on a western film set. Most tourists find themselves stopping here as it is not only a good place for a coffee but it is also a museum. Sitting in the garden drinking coffee and eating eggs Benedict while fending off hungry sparrows was very enjoyable.

Naturally, visitors have lots of questions about the place and, I presume, the staff tire of having to answer the same old questions all the time. To help, and to keep everybody happy, there is a board of FAQ and the answers. How sensible.

We reached Queenstown at around lunchtime, giving us plenty of time to enjoy some of the fun activities on offer. John took to the water in a Hydro Attack, a small, shark-shaped semi submersible that powered through the water, occasionally sinking below the surface in order to pop back up, leaping vertically out of the water. It looked fun. 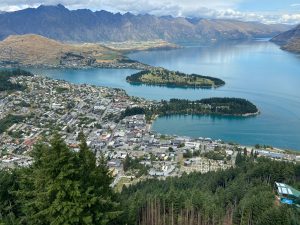 We then all went up the gondola to the Skyline perched on the hill overlooking the town. There, as in Rotorua, you can take a number of luge runs, tandem paragliding, bungy jumping, mountain biking, or enjoy the view with a beer! Whatever you think about Queenstown and its high energy image, it is in a superb location and from the balcony, with a beer in hand, it is some view with Lake Wakatipu below and mountains rising from all of its shores, including the Remarkables. 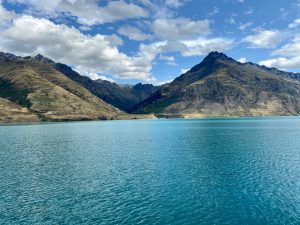 Later in the afternoon we took to the water with a sedate cruise on the steamer, TSS Earnslaw, which simply took us along the lake to the Walter Peak wharf, where many disembarked to have dinner at the restaurant, while others joined us for the trip back to Queenstown.

Eating out in town was made more interesting, that evening, by the fire alarm going off. We were eating in Farelli’s Trattoria, part of a complex of restaurants and bars in a converted waterfront warehouse. Initially, nobody took much notice, but eventually the staff asked us to leave while it was sorted out. Fortunately we had finished our main course. 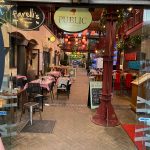 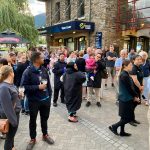 Fire engines arrived but there was no sign of smoke coming from any of the establishments. While we waited the paraglider pilots who had been bringing people down off the hill all day, were taking their final flight of the day, solo. They gave us an aerial display above our heads and across the end of the lake to land on the beach. It was fantastic to see just how manoeuvrable they were. Only one slightly misjudged it and came down in a tree.

Eventually, the all clear ws sounded, by which time we needed a pudding!