At least it had stopped raining and it looked as if the clouds were going to clear with mountains beginning to show.  Then it all went bad again and as we left Twizel the clouds completely obscured the mountains and it began to rain.  We were leaving MacKenzie country, MacKenzie being famous as a sheep rustler who trained his dog well to assist him. Fortunately, as we headed south the weather began to clear consistently throughout the day. 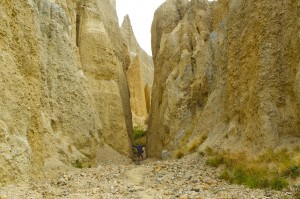 John dwarfed by the cliffs of clay

Our first detour was to have a look at some clay cliffs we tried to find yesterday.  They are impressive, with pinnacles standing about 300m tall.  It looked as if Gaudi had sculpted them in the style of his La Familia in Barcelona.  Flitting from cliff to cliff were common or garden pidgeons while circling overhead, keeping a beady eye on what was below were harriers searching out a tasty meal.

Continuing south we stopped for lunch on the banks of the Cutha River, bathed in gloriously warm sunshine.  We were now in Otago, well known for its vineyards, and had we felt inclined, we could have called into a number of vineyards to sample the wine. 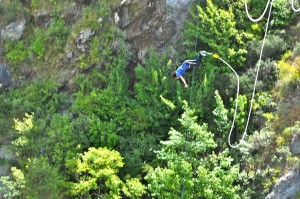 On leaving Cromwell we entered the Kawatau Gorge, where you can experience jet boating and body boarding through the rapids.  It looks exciting.  Towards the other end of the gorge and still about 20km from Queenstown, we stopped at A J Hackett’s Bungee.  It was fascinating to watch and each participant had the opportunity to choose whether they got a dunking in the river or not.  Shall I have a go?  Have I still got the bottle?  Suppose I hurt myself?  I don’t know, what shall I do?………What did I do?

After the bungee jump we went to a winery next door where Angela had a little taste.  I couldn’t as I still had to drive the last 20km to Queenstown. 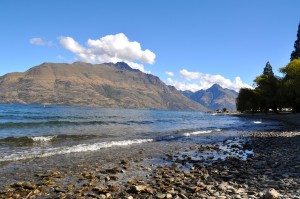 If I am brutally honest, New Zealand has not given me the wow factor I was expecting.  It has been brilliant and we have seen some fantastic places.  I suppose I have been pretty spoilt over the years but today, the arrival in Queenstown has given me the wow factor I have been looking for.  The town is nothing like I expected it to be.  Queenstown is the adventure capital of the world but it is also a very classy town.  What makes it though is the lake and the mountains which surround it.  Fantastic.  It helped that the sun was shining and everything looked perfect but this really is a stunning place.

Having found the youth hostel with ease, right on the lake shore, we ventured into town where I sought out our tickets for the Routeburn trek and bought some dehydrated meals to eat along the way.  In view of the fact that we are going to have to restrict our food when we start the Routeburn, because I am having to carry it for five days, we ate well this evening at a restaurant overlooking the lake and the fantastic view down it.  We shall do the same tomorrow.

We travelled about 170 km today thru varied landscapes and changeable weather.  We left low cloud in Twizel, still no really satisfying view of Mt Cook.  Our first detour took us to some impressive clay cliffs.  Later we stopped for coffee at ‘The Wrinkled Ram’ and I felt merino wool fleece which was predictably very soft.  Lunch spot was by a sun-bathed lake and finally we saw bungee jumping in all its glory. Queenstown nestles beside Lake Wakatipu and belies its Maori name by looking as if it should be in Switzerland!  We enjoy a leisurely evening mooching the lakeside and shops finally having a good meal overlooking the water in the dusk.

Simon Davis and I travelled up to the Lakes early on Friday morning, ahead of the rest of the group, so that we could have a walk in the snow.  Leaving the car at the Old Dungeon Ghyll Hotel, we headed up the Langdale Valley, climbing up the steep Rossett Gill in ever deepening snow up to Angle Tarn.  As we came over the lip between Hanging Knots and Rossett Pike the wind hit us hard.  From the tarn, we struggled in 70mph gusts to Langdale Combe.  The snow was soft and the ground underneath also soft and waterlogged.  The streams were running pretty full and twice I took the plunge, the first time doing a face plant in the cool water.  The pint(s) that evening were well deserved.

On Saturday the wind seemed to be blowing even harder as, now twenty of us, walked up Easedale in squally showers.  As we climbed we met people coming down having abandoned their walk in preference for tea and cakes in the relative warmth of Grasmere. As height was gained, so the wind strengthened and we found ourselves preferring to crawl around on the rocks of Sergeant Man.  As we crossed the relatively flat top of High Raise  and Low White Stones, the wind now broadsided us, regularly knocking us off balance before we began our descent down Far Easdale.  By the time we returned to Burtharlyp Howe Youth Hostel our faces glowed from the wind and pinprick needles of rain and snow.  More well earned pints in the evening.

Sunday was a more sedate day with a walk up and around Loughrigg Fell.  The weather, while still windy, was much pleasanter and we found a good sunny spot, out of the wind, for our lunch.  By mid-afternoon it was time to head south and back home, after a thoroughly exhilarating weekend.  K2 should be a breeze after this! 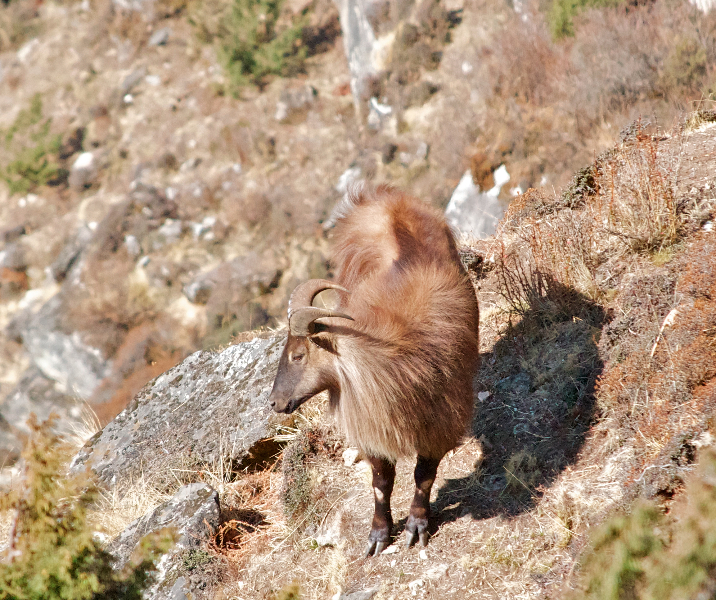 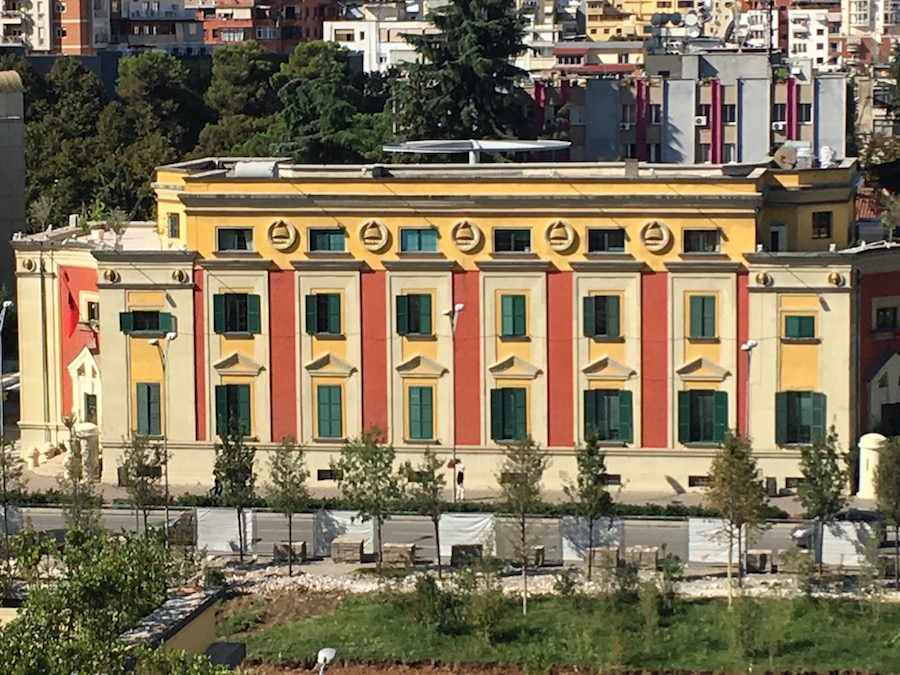