Before humans came to New Zealand it was a perfect environment for birds and animals; they lived in harmony and because there was very little predation the way in which they evolved differed from other parts of the world.  Birds became flightless and nested on the ground.  The first settlers inadvertently brought in rats and other rodents, which preyed on the endemic and innocent creatures.  Later, when Europeans began to settle in New Zealand, they brought all sorts of creatures with them, most by design rather than by mistake.  Cats, dogs, squirrels, goats, possums and a lot more caused some species to become extinct and others to live in danger of doing so.  Massive deforestation occurred for agriculture and the goats ate everything in their path.  Birds, like the sparrow and starling were brought over from Europe to keep pests at bay from eating crops but have now become pests in themselves.  Alien plants were introduced, which are so prolific in the environment New Zealand provides they have strangled some local species. 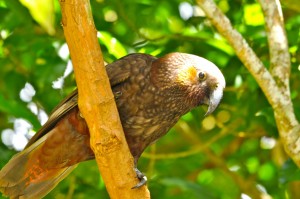 Zealandia, or Karori Wildlife Sanctuary as it was formerly known, aims to establish an environment as close to that that existed before humans entered the fray.  To achieve this they have built an 8.6km fence all the way round the sanctuary, which is rodent proof.  To make sure they have everything covered there are poison traps for any rodents surviving within the sanctuary, or who manage to get through the strict security. It provides a natural safe haven for over 30 species of native birds and reptiles The result is that birds and reptiles, which were on the brink, are increasing in numbers because eggs are not under threat on the nest, are hatching and the young being allowed to grow to adulthood.  Judging by what we saw today, it is working.  The remarkable thing is that this is all happening within the city of Wellington and not in some remote rural area.  It is the world’s first urban sanctuary and has a 500 year plan to restore the valley to its pre-human state.

On entry to Zealandia we visited the exhibition, which, like Te Papa, was really well presented and interesting.  I would have liked more time there but we needed to walk to the Kaka feeders where one of the wardens would give a talk about the Kaka.  The Kaka is a large, less than colourful, parrot, but has an endearing personality, like most parrots.  In order to get there we had to walk along a lake shore surrounded by steeply wooded hillsides.  Predictably, when we got there, there were not too many kakas visibly evident but they could be heard in the surrounding trees.  There were too many small, noisy children for the kakas to feel comfortable.  All the birds we did see were juveniles.  The talk was interesting and showed just how successful the programme is with 33 chicks hatching this year. 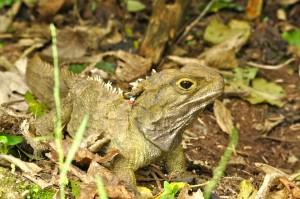 From there we walked further into the sanctuary before taking a different route to listen to a short talk on the tuatara, a lizard that lives in burrows and has been a victim of rodent attacks in the past.  The adult grows up to about 18 inches and is quite solidly built.

Away from the crowds the kaka came to their feeding stations and performed for the camera.  Very satisfying.

I was keen to go and do some bird photography so I left Angela and Ben to do their own thing while I delved further into the sanctuary.  The further in you went the quieter it became, largely because the paths became less accessible.  There were some hides, which I thought would provide me with the photos I wanted but it was soon clear that I they were not near the path I was walking on.  However, I did come across a feeding station for the hihi and the bellbird, both about the size of a sparrow.  There were several of them and the hihi was particularly beautiful with yellow flashes on each side and on the wings.  As much as I tried I could not get a picture of them; they were far too quick.  They were not particularly afraid of me but would not sit still long enough for me to focus the camera.  Frustrated, I moved on.  Next I came across a small group of about half a dozen saddlebacks, blackbird sized and predominantly black with a red saddle across the back, a red rump and red flanges on either side of the beak.  They darted about among the branches and while I did get a couple of shots, I was again disappointed with the results.  A black robin then teased me by sitting on a low branch at the side of the path, posing, until the camera was set and then off he flew!

I eventually did find some hides so set up ready.  Absolutely nothing came into view and I had to give up.  I decided bird photography spoiled a good walk.

I was already late for meeting up with Angela and Ben, so I headed off back towards the centre where I knew they would be.  The journey was not without it distractions with more kaka in the trees close to the path, more tuatara sitting in amongst the bushes and pied shags on logs in the lake.

By the time I met up with Angela and Ben it was 3.00pm and I was starving.  My lunch was waiting for me.  Thank you. 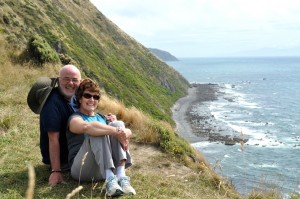 We then drove out to Makara Bay, a stony beach with a very pleasant path leading up to the cliff tops where we had extensive views of the north coast of South Island.  Afterwards we met Kelly coming out of work and bought fish and chips to take to share with Kay, our host, who had returned from a few days with her family.

Started the day with a visit to a walk-in hairdresser.  A young shaven-headed Greek Cypriot guy did the business.  I am happier to have a more manageable head in the Welly wind!

Zealandia was enjoyable in the sunshine and Ben was an enthusiastic and informative guide.  He says he has already started to write a documentary about birds.

We ended the day eating take-away fish and chips New Zealand style ……..sitting on the floor around a coffee table eating with our fingers.  Even 1 yr old Sara tucked in too!