A dull damp morning greeted us as we tip-toed around the house, not wishing to disturb Kay or baby Sara.  Final bit of packing done, making decisions about what to take and what to leave with Ben was all a bit of a nightmare.  We are bound to have made a wrong decision at some point in the next three weeks.  Ben arrived and we loaded the car, said our goodbyes to our hosts and headed into town.  There wasn’t a lot we could do in the short time we had left in Wellington and with the weather not being at its best.  We met Kelly for coffee and then Ben took us to the airport.  Next time we shall see them it will be the eve of their wedding.

The flight down to Christchurch took 35 minutes and the weather was not dissimilar to that in Wellington.  The movement through the airport was quick and simple and the girl on the Avis desk was very efficient and helpful.  We collected our Toyota Corolla and headed off to the supermarket before steering in the direction of Banks Peninsular.  The 75km took just over an hour on empty, if a little windy, roads.  The landscape here looked far more parched than in Wellington.  As you approach Akaroa you climb up from the Canterbury Plain, over the rim of the old volcanic crater and drop down to the sea, which now fills it.  We had nothing booked and the first place we enquired at in Barry’s bay was full.  However, the owner was very helpful, phoned a neighbour and cleared the way for us to have a full self-contained cottage for the night for 100$.  It is stunning and the view from our bedroom down to Akaroa and the sea is to die for. 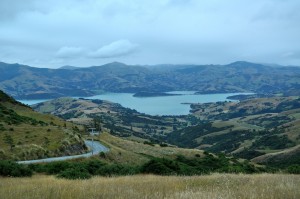 Akaroa was originally a massive volcano 60km off the mainland.  It was so high it was covered with snow all year.  6 million years ago there was a huge explosion taking the top off the mountain and exposing the crater to the sea, which allowed the sea to flood in to the crater. Steep sides rise out of the water surrounding the sea inlet.  In the evening we drove up to the crater edge to look down the outside of the crater to the blue Pacific Ocean.  It really is a beautiful part of the world and there are very few people about.

When we arrived, I managed to book a three-hour trip out to see the dolphins and to swim with them.  A very exciting prospect, which we are both looking forward to.

Our farewell to Kelly was in the very modern City Library, where you can look from the Café balcony into the whole of the ground floor where all the books are stored.

We walked under the iconic Fern Ball.

Five hours later we were welcomed at Twin Gullies Roost.  Doug & Victoria Hamilton have an idyllic 8 acre smallholding/B&B.  We settle willingly into our Victorian brass bed, until there is ominous rumbling and vibrating at 10.30.  I am ready to crawl under the bed, but John says it’s just the water tank refilling!  Now we know it WAS an earthquake of 4.5!!