Those of you of a certain age may remember ‘The Singing Detective’ on TV.  I cannot remember anything about the story but I do remember that the main character had a terrible skin affliction where it fell off in chunks.  Well, that’s now me.  The heat has gone from my head but it is falling off in great flakes.  Where it has flaked away the skin is red.  Where it has yet to flake it is brown.  Children run screaming for their mothers when they see me.  The only consolation is that I am losing weight.

After a leisurely start to the day we walked into town rather than catch the bus. The sun was shining and it was a pleasant day.  From the house we walked up a gentle hill to Brooklyn.  From there we left the road and took a path through Central Park (No we are not in New York.  This is still Wellington.)  Central Park is an area of natural woodland with massive trees and ferns.  When in the woodland it is hard to imagine you are so close to the city centre but when you emerge you are almost there.

Our target for the morning was Cuba Street, a mixture of street cafes, a diverse range of ethnic restaurants and retro shops selling everything from vinyl record albums to 1950s frocks.  In places it looked a little seedy but it was worth a visit.

We met Ben for lunch, during which we discussed the possibilities for the afternoon.  I fancied taking the ferry out to Somes Island.  Angela preferred to spend more time in the city, so we split up.

Twenty two dollars buys you a twenty minute return trip to Somes Island, sitting out in the middle of Wellington Harbour.  It has had a number of uses over the years; it started out a, as prison, during the two world wars it was used to hold mainly Italian prisoners of war, and it was used as a quarantine centre for immigrants coming to New Zealand.  Now it is a wildlife sanctuary attracting a great many birds, which flourish in the absence of rodents. 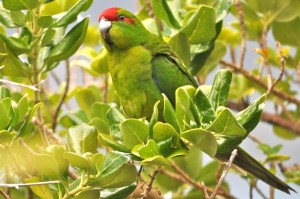 On landing I, along with my fellow passengers, was taken into a room for a brief chat about maintaining the status quo on the island.  We had to check our bags to make sure we hadn’t brought in any stowaway spiders, and make sure we hadn’t brought any soil onto the island via our shoes.  This was a little frustrating as it was already 2.40 and the last boat back to Wellington left at 3.25.  This was not going to give me much time to explore and take photos of birds.

Once released, I shot off up the hill to the cemetery (some who arrived on the island, never left) where I knew I would get some good views and maybe a photo opportunity or two.  There were black backed gulls sitting on the hillsides, obviously looking after young but it was impossible to photograph the gulls flying by. Similarly the kakariki, a type of parakeet, were impossible to photograph in flight; they were far too quick.  I did come across quite a tame robin, which allowed me to photograph him/her.  Not quite as obvious as our own robins back home. 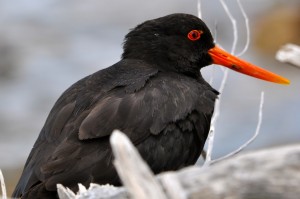 Conscious of the time I headed back towards the quay and came across a kakariki in a tree by the path.  My trip to the island was not wasted as I was able to get a number of decent pictures.  At the water’s edge I went to watch the boat coming in when I spotted a black bird with a very long beak and red rings around its eyes.  It was a little perturbed by my presence but did nothing more than make a lot of noise.  More good photos.

Back on the mainland, I met up with Angela and we made our way back to the house.  In the evening we went out with Ben and Kelly to a super little restaurant just off Cuba Street.

I am very pleased that my foot has carried me a long way today without too much complaint.

Whilst John went island hopping I shopped in Wellington’s Harrods (Kirkaldie & Stains).  It is a dept store struggling to be 20th century let alone 21st.  However I succeeded in my quest to buy something for our hosts and the service was excellent.

I visited the National Portrait Gallery in Shed 11 on the Quayside. As the venue suggests it is a world away from Trafalgar Square but has a charm all of its own.  Ed Hillary is featured…..I recognised him from a distance especially as he’d been painted in 1992, just 6 years before he came to tea with us in Lobelia Close!

One thought on “The Singing Detective goes to Somes Island”