As the day progressed the weather began to improve.  The sun made every effort to break through and just as quickly as it did so another brief shower dampened our excitement.  Kelly, throughout the morning and into the afternoon, was getting updates from Father Brian as to his progress from North Island to South Island.  It was touch and go.  The airline was also keeping us up to date with the situation and we heard that the plane carrying Father Brian had reached Blenheim but was circling the small airport, contemplating landing.  Fortunately it landed. 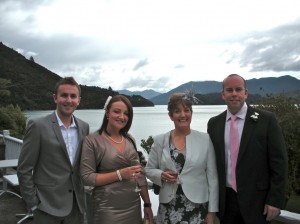 I found myself taxiing people up to Ben and Kelly’s bach for hair and make-up and then discovered I was to collect the bride and bridesmaids and take them down to the Portage.  The weather was gradually improving.  The priest arrived in Jim’s van at 5.00 and delayed things a little as they still had to get themselves ready.  Eventually, about 20 minutes late all was ready and Kelly looking absolutely stunning emerged with Kay and Megan, the bridesmaids, and I drove them down to the portage.  As we arrived the sun came out and the temperature went up several degrees.  As Kelly walked across the lawn with her father and down to the front of the assembled gathering, Father Brian was still organising himself, putting on his robes and sorting through his papers. 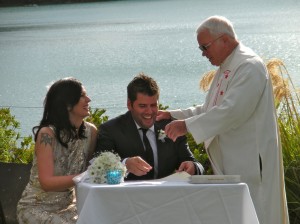 It was incredibly relaxed and informal.  After the introductions and welcome the serious business of the marriage took place.  Although it wasn’t serious at all, it was full of humour and smiles.  The only serious bit seemed to be my reading from the First Letter from Paul to the Corinthians.  The happy couple looked just that and are so right for each other.  The setting was perfect with glorious views looking out across the sound.  This is what we had come to New Zealand for; it had just taken us a month to find it. 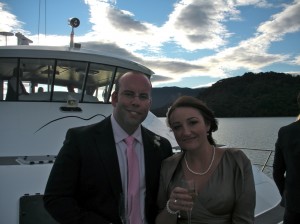 The ceremony over, we all had a surprise in store.  A motorised catamaran was organised to take us all out for a cruise around the sound for an hour during which time we were to drink champagne and eat canapés and mussels.  By now all cloud had dissolved and the evening sunshine was the icing on the cake.  The sound looked stunning and the company was great.

Returning to the Portage we were ushered into the function room where the reception was being held.  Once we were all there Ben and Kelly processed in to the Star Wars theme.  It was here where traditional procedure did not follow.  Before we ate, Jim, Kelly’s father spoke.  Ben responded and Kelly also gave a speech.  All speeches were very good.  Ben got a little choked when he professed his love for Kelly.  It was remarkable that he had got this far through the day without displaying emotion.  He has a reputation for being emotional at times and there were plenty of reasons why he should be emotional today.

The wedding breakfast was a buffet of superb food, fish, salads, potatoes, lamb and beef.  It was all really tasty. After the main course it was time for the Best Men, Rijan Slater and Ben Shutes, both old school friends of Ben, to do their worst.  They did a good job and appropriately told the assembled friends and family a few truths about Ben in his pre Kelly days.  They certainly had enough material to choose from.

After the sweets we danced the night away until shortly after midnight.  While Angela and I sidled off to bed, many of the younger revellers kept the party going well into the early hours!

A great end to the day after such a worrying start and a really happy occasion.

Angela, The Mother of the Groom’s view of the day 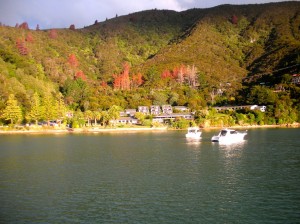 After the worries about the weather in the morning it turned out perfect in the end.

Having had a very stressful early morning; woken by the ‘almost cyclone’ storm, things were not looking good!  There had been severe weather warnings issued across North Island and the Marlborough Sounds where we were staying.  My imagination ran wild at 4am thinking that the roof might blow off or there would be a landslide.  Luckily we felt we were in a little part of paradise and the end of the day was a complete contrast to the start.  It turned into a magical dreamlike experience and I will treasure the fond memories.

Ben and Kelly have put a huge effort into planning their wedding and all that work paid off.  They chose a vintage theme.  Kelly’s dress was stunning, a straight, sleeveless, cream full-length shift with a slashed back from neck to waist and fully bejewelled!  It sparkled in the welcome sunshine and she looked reminiscent of an early Hollywood star.  Gorgeous!

The service was brief but touching. 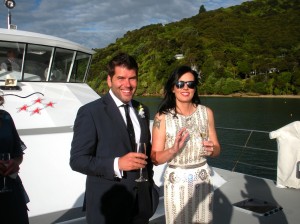 The happy couple, Ben & Kelly on the cruise

The cruise, which followed was a surprise to most of us guests and it was an ideal opportunity for the photographer to do his stuff.  The beautiful scenery, wooded hills dropping steeply down to the sea and the occasional building peeping through the foliage was all the more appreciated from the boat.  The sun continued to reflect brightly off the water, echoing the light on Kelly’s crystal dress.

We had a lot of fun at the reception; cheery conversations, laughter and tears with the speeches, dancing and photo booth operating.

The seven hours flew by, there had been a lot of activity, not a moment to get bored;  a stupendous evening.