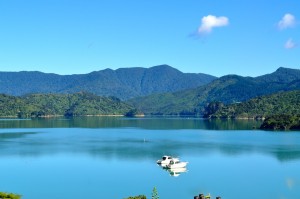 Woke up feeling refreshed after a good night’s sleep.  Not sure the same can be said for some of the young people nursed hangovers.  I think as I got up some were just settling down to some much needed sleep.  Drawing back the curtains, I was greeted with a perfect scene, bright sunshine glistening of glass smooth water.  This really is heaven on earth.

Following a very leisurely breakfast we sorted out the mess our room had become and transferred everything up to the bach a little way up the hill from the hotel.  I was keen to get the ‘jobs’ done as there was some playtime to be had in such wonderful conditions.  Attached to the hotel is an adventure centre where we could hire kayaks.  A number of us wanted to do this so at 1.00 we gathered for our safety briefing, which included watching an eight minute film.  In it we were warned to expect the unexpected and a whale leapt out of the water and crashed down amongst some kayakers.  Andy Rankin’s eyes, which until this episode had been almost glued together, were out on storks and he began to regret having got out of bed. 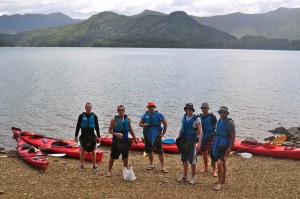 We had booked the kayaks out for four hours but we were barely 100 yards off shore when a number of us were beginning to think, ‘Why did we say we wanted four hours?’  It got easier as we got into the swing of things.  I shared a kayak with Stephen.  I sat in the back, which meant I had to steer as well as paddle.  Multi-tasking does not come easily and I kept losing contact the peddle on the left side and had difficulty finding it.  Popping ashore, out of sight of the hotel, just in case anybody was watching, we remedied the problem by swapping position.  Problem solved. 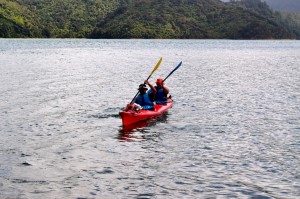 We had a planned route but within half an hour of setting out the wind picked up and a swell on the water began to develop, particularly in areas less sheltered from the land.  It made for good fun but we soon realised that if we went the full distance a large part of our return journey would be into the wind and the swell, making it all the more difficult when we were beginning to tire. We cut short our route, but still managed to cover quite a considerable distance and were out about two and a half hours in total, which was long enough.  We were quite wet from the spray and the sunshine of the morning had been replaced with some threatening clouds.  The temperature had also dropped and combined with the strengthening wind it was becoming quite chilly.  We will know tomorrow that it was long enough when our shoulders are stiff.  I might also have some problems in the groin area from the sitting position and the bracing of the knees against the side of the kayak.  It was great fun, though.

I was sure I would wake with a headache!  But no!  hooray!

Today the sun shone and the promise is for continued good weather.  I am looking forward to enjoying this pretty spot, in a more relaxed manner.

Anna and I sat on the veranda of The Portage Hotel, sunning ourselves gently and watching people come and go.  The clear up operation after the wedding was in full swing.

At 2pm we took over the house, which we have rented for the next 4 days.  It is very modern and convenient with the same, now commonplace, breathtaking vistas.

I cooked spag bol for 12, so normal service is resumed!

One thought on “Paddle Power”