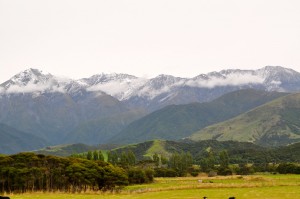 Fresh snow on the hills above Kaikoura

The overnight rain had gone and we were greeted with bright sunshine and snow on the surrounding hills!  The wind had dropped to nothing and the sea flattened out sufficiently for the whale watch sailings to go.  The weather forecast on the television talked of the ‘calm before the storm’ and there were over 100 severe weather warnings for the whole of the North Island and the top of South Island.  At the moment it is hard to imagine that the weather could deteriorate so much so quickly.  This is New Zealand and I believe it is capable of throwing anything at us whatever the season. 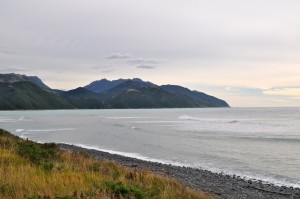 The train journey was spectacular with the first 70km hugging the shore line passing flocks of sea birds and colonies of fur seals lounging on the beaches.  On the inland side of the train the mountains rose up majestically.  Eventually we headed inland through the rolling Marlborough wine country, through Blenheim and on to picturesque Picton.  As we got off the train, Adam, Ben and Jez Robertson were there to meet us and help with the carrying of our luggage to the Avis office where we arranged the hire of another car, a larger one this time to accommodate Stephen and all our luggage.  It was good to see the boys so relaxed.

Car organised, we went to the supermarket to buy all the food for 10 people for the two days following the wedding, before driving round to Portage.  The drive was incredible around Marlborough Sound.  It has to be one of the bendiest roads I have ever been on.  With the exception of a short straight section half-way it was bend after bend as it followed the lines of the coast.  It took all my concentration and I was grateful the new car was an automatic.  The scenery is absolutely stunning with tree-covered hills dropping into blue/green water.  There are so many little inlets and coves it is such a fascinating area to explore.  The Queen Charlotte Trek, which passes through this area is one of New Zealand’s top treks and is one I seriously want to do on another occasion. 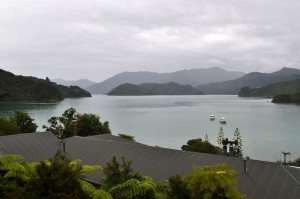 View from the Portage

Arriving an hour and a half later at Portage we met up with Anna and Stephen.  Our family was complete and it was great to have them all together, such a rarity with them being all over the place.  Ben and Kelly have chosen really well for their wedding.  The hotel grounds drop down to the water’s edge with layer upon layer of hills and promontories disappearing down the sound.  Stunning!!!

In the evening we all gathered for a BBQ and a drink or two to catch up with old friends who had come out for the wedding and to acquaint ourselves with some of Kelly’s family.

In the night the weather changed and the rain beat heavily down on the roof of the apartment we shared with Adam, Anna and Stephen.  The wind howled and we could feel it tugging at the walls and roof.  Several times the noise woke us up.  It lasted for hours.  We could hear water dripping through our ceiling on to the carpet by my head.  At some point in the night Angela persuaded me to put pillows by the doors to stop them rattling in the wind.  I kept feeling cool air blowing across my face and head from the patio doors from the balcony.  It was a wild night.

At breakfast we got a call from Ben, who had had little sleep as their bach at the top of the hill had felt the full force of the wind and shook all night, telling us that the wedding had been put back two hours to 5.00pm.  The priest, who was flying over from North Island, had had his flight cancelled and was hoping to get a later one, hoping the storm would abate. All ferries between the two islands have been cancelled for the day and they have even closed the Queen Charlotte Track and pulled everybody off.

As I write, things are beginning to calm down, the rain has stopped and the sun is trying its hardest to break through the cloud.  Assuming the priest can get here the wedding will take place at 5.00 as planned but it will probably have to be indoors rather than on the ceremonial lawn, which is a little damp and might be a little chilly in this, the worst New Zealand summer for years!

One thought on “Getting together”