I have always struggled with navigation in forests, and this last week has been no exception. Firstly, I ventured out into the Forest of Dean last week to plan for the up-coming group walk. I immediately discovered that unless you are walking one of the forestry commissions designated walks, the signage is, at best minimal, or at worst none existent. Without landmarks and the absence of sunshine, and an ever-present screen of trees, the odds were stacked against me. Maps are often of little use and even the phone was giving me false information. As a result, I spent the morning wandering around, becoming frustrated with my own inability to navigate, but at the same time enjoying the freedom that wandering provides. In the end, I decided to give up and leave it to chance with the group.

By the time the group walk took place, I had decided to revise the route. There has been so much rain recently, that the section along the banks of the Wye was too slippery and unpleasant; we would remain in the woods throughout. I also gave out printed maps to each of the seven walkers who had joined me, so that they could take some responsibility for the route finding/selection. I don’t think they were referred to at all during the walk. 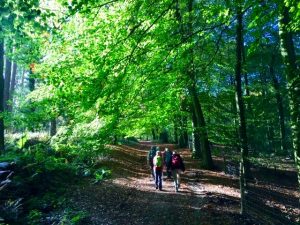 Heading south from Symonds Yat Rock car park on a gloriously sunny, if chilly, morning, the route was easy. Conversation flowed. These walks are not just about the exercise but the social interaction, without distraction, that walking provides. With the exception of two members of the group, we had all been in Kyrgyzstan earlier in the year and this was the first time we had been together since, so it was very much a reunion. 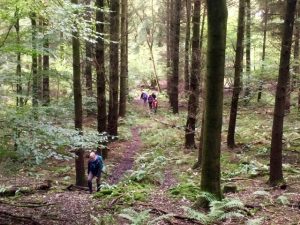 When we reached the camp site at Braceland we had navigational decisions to make. It was clear that  it really did not matter where we went, so I made it up as we went along. Much of the time we were never quite sure which path we were on; occasional junctions or turns helped us, and we were able to adjust if we felt we were going in the wrong direction. Largely, it was the position of the sun that indicated our direction of travel, and if it indicated we were travelling the wrong way, we corrected at the first opportunity. 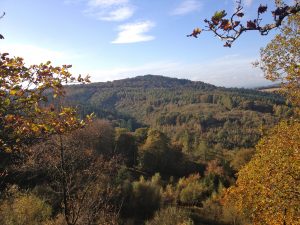 Remarkably, we found ourselves on the Wysis Way, which links Offa’s Dyke with the Thames Path, and which I had wanted to be on. Having found it, we stayed on it. At one point, Simon was lagging behind, and when he caught up with us, he showed us why. He had been taking photos of a stag in amongst the trees, not too far off the path. The rest of us had been either too deep in conversation, or careful with our foot placements, that we missed it.  Eventually, we reached the Suck Stone where we stopped for lunch. The Suck Stone is a rocky outcrop that provides a good view out over the forest and beyond. It is the first, and only, point from which we had had any view at all. 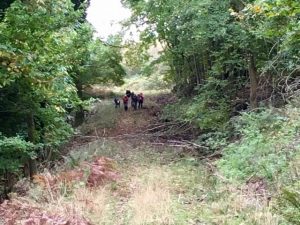 It was time to make tracks, and to find our way down to the River Wye. There was plenty of distraction along the route while people harvested sweet chestnuts, which were in abundance. So focused on that, and convinced that we were on the right path, we were led into a small quarry with no way out, other than to retrace our steps. I knew where we had gone wrong. There had been a hint of a path leading off at the edge of an enclosure, which I had ignored. Foolish me!

It was while on this wrong path that we bumped into a young couple. The girl recognised me but I had to be helped in recognising her. It was Olivia Hyde who had been on the Himalayan Club 2011 trip to Ladakh. She and her boyfriend had recently moved up to Cheltenham from London and were taking advantage of the countryside now available to them. It was great to catch up.

Taking the correct path, we descended steeply down to the river, which was full and brown; not the tranquil, clear river that we have grown to love on numerous canoe trips. Now there would be very little need to paddle, and you certainly would not need four days to canoe its length. 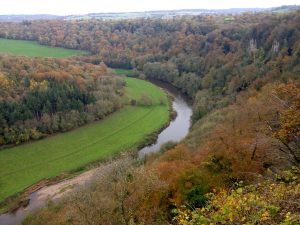 The sting in the tail is that there is a steepening climb back up to the carpark, but there is the reward of a cup of tea in the cafe at the finish. The reward is also the view from the lookout point at the top of Yat Rock.

We had managed to cover 10.75 miles in our wanderings. While I enjoy having a plotted course to follow, this walk allowed us a degree of freedom that is equally enjoyable. We were never really lost and every path leads somewhere.