Arrival at Kathmandu airport is never the same twice. It is 18 months since I last flew into the city and changes have occurred. In order to speed up the process from touchdown to taxi they have abolished landing cards. I had pre-empted the visa procedure for the group by advising them to complete visa application forms before departure, with photo attached and money ready. And, to be fair, that worked very well and efficiently. But what came next was bizarre. Before we could go to the carousel to pick up our luggage, we had to queue to have ourselves and our hand luggage scanned. It was something to do with being metal free! To make matters worse there was little queue discipline and those who were charged with creating some discipline did not have a clue.

Having battled our way through the scanning process, the baggage collection area was heaving, not just with our flight but several others also.

Needless to say, our luggage had not come through yet, so we had an opportunity to watch the chaos and see the sort of packages many Nepalis, returning from working in Qatar, come home with. There were some huge cardboard packages, which were clearly widescreen televisions. Others could well have been fridges, freezers or washing machines. An American climbing expedition had box after box of equipment, but the most unlikely of all were two enormous animal cages with a greyhound in each! They were not very happy.

Eventually our bags arrived all together and we then joined the melee to try to vacate the airport. There was so much congestion in the green channel with boxes being inspected, that we were directed through the red channel in order to make our escape. Even then our passage was blocked by heavily laden trolleys, abandoned while their owners were changing their hard earned Dirham into Rupees.

We escaped to be met by our driver and  vehicle, directed to deliver us to the Nepal Life Story Guest House in Patan. It was good to be back. 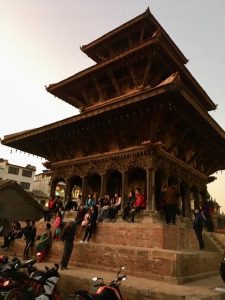 While the rest of the group rested and caught up on lost sleep, I headed to Patan Durbar Square and Swotha, where I wanted us to eat in the evening. It was encouraging to see the progress made on the reconstruction of temples and artefacts since my last visit. There are now just two temples, one at either end, still going through the process. It was busy and a happy place to be.

Picking Tim up from Life Story, we walked down to the REED office to say ‘hello’ and to confirm arrangements for the following day. Many of the staff were out in the field but we chatted to Bhim and Gita who were both very welcoming. In fact, when I mentioned to Bhim that I wanted to buy lots of things to take back for King’s Hawford to sell, he offered to do the shopping for us, which was very welcome as he would get a much better price than me, even with some hard bartering.

Leaving REED we headed back towards Patan, stopping off at the Newari Kitchen to book a table for the following evening. We took advantage to sit and have a beer, while discussing the various, hoped for, outcomes of this visit.

As we left we looked towards the high, snowy peaks of Langtang piercing the darkening skies. 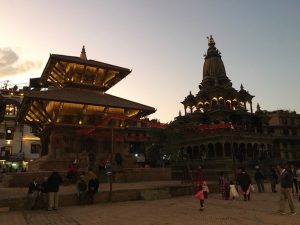 Meeting with the rest of the group who had revived after a decent rest, we headed towards Patan Durbar Square. The atmosphere was very relaxed with lots of local people sitting on the steps of the monuments and pagodas enjoying dusk.

By the time we came out of Swotha, well fed and with a beer or two, it was even more crowded in the square. Music and singing from one of the temples filled the air. One of the things the reconstruction has allowed is the installation of lighting highlighting the intricate carvings on the timbers. This also makes it a much more pleasant place for people to gather, to socialise and to enjoy some down time in their chaotic Kathmandu lives. 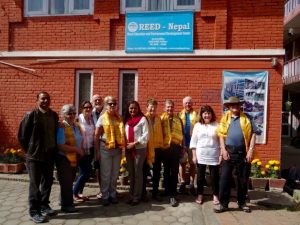 The following morning, having been woken by ringing bells, chanting worshippers, horns and dogs barking, all simultaneously, at 4.45am, we walked over to the REED office. There we met Bhim and Gita again. This time Gita gave a presentation on the work of REED, particularly with reference to Taplejung. It gave a better insight into our work and our relationship with REED. It gave the group an opportunity to ask questions ranging from recording outcomes, developing leadership skills and safeguarding. It was a valuable meeting and REED impressed their audience, giving them confidence in their involvement with HTUK.

Heading into Thamel for some lunch, I kept meeting people whom I knew, who were pleased to see me and made me feel very welcome. I went to see my money changer, whom I had not seen for three or four years. Remarkably, there were no issues with me asking to change £6000. He pulled wads of bundled 1000 rupee notes from under his counter. There were no locked safes, no shatter proof glass, no security what-so-ever and I was able to walk out immediately with 870,000 rupees in my bag.

Azam, a jeweller I have known for years, when at first, he seemed nothing more than a boy with a Michael McIntyre quiff, he is now middle aged with flecks of grey in his hair. I promised to go and see him next spring when I return and will have a little more time. 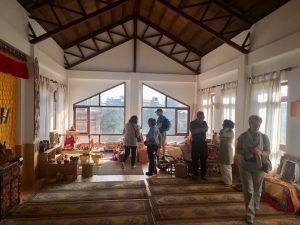 After lunch we went to visit another friend of twenty two years, Meyrav Mor, an inspirational, passionate, focused and determined Israeli woman who has devoted nearly all her adult life to education. She is in the process of setting up a teacher training centre and school, which brings together the philosophies of Buddhism and Rudolf Steiner. The centre she is creating, in the shadow of a Buddhist monastery close to Swayambunath, displays everything that is special about Meyrav, a calming, caring, artistic haven in the chaos that is Kathmandu, exactly as I first met her in her little school in the squalor of Bal Mandir orphanage in 1997. 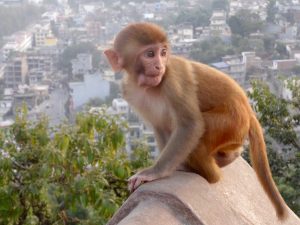 Leaving Meyrav, our taxis took us to Swayambunath, the Monkey Temple. It lived up to its nickname with a huge population of cheeky rhesus monkeys jumping and cavorting around us. The foot of the hill was crowded with local visitors of all faiths, who are happy to celebrate and enjoy this spectacular venue. Climbing the steps up to the stupa, we were able to see just how much damage was done during the 2015 earthquake. The stupa and some of the surrounding monuments were unscathed, but the buildings around the edge, including the monastery, were completely destroyed, and are still in the process of being rebuilt. 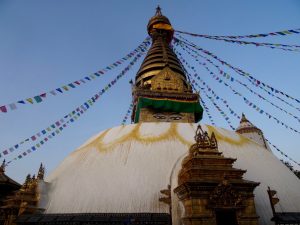 From its lofty position, you can look out over the whole of Kathmandu, or at least as far as the smog will allow you to see. The growth over the twenty six years I have been travelling to Nepal has been unbelievable. I remember there being green fields all around the base of the hill on which Swayambunath sits. Not any more! Every square inch of land has been built on.

It is a great place to watch the late afternoon sun dip behind the horizon, a huge, hazy, orange ball.

Getting away proved difficult and showed to the group, many of whom had not been to Kathmandu before, or visited so long ago they remember it as almost car free, just how congested it has become. It took us the best part of ninety minutes to reach the Newari Kitchen in Patan. We arrived just on time for a beautiful, typical Newari meal.

An early night beckoned as we were heading out to the hills in the morning and we needed to be well rested before embarking on such a journey.