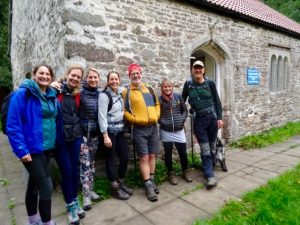 Back in March, at the Himalayan Club 25th Anniversary Dinner, a group of girls from the 1998 Everest trip paid £300 during the charity auction,  for me to take them walking, twenty one years on from our previous walk together.

Have they changed? Not at all! In 1998 they talked their way, non-stop around Nepal and this weekend they talked non-stop around the Black Mountains. There was just a brief lull in the conversation as they tackled a short steep section. What has changed is the topic of conversation; a lot of water has passed under the bridge in the intervening twenty-one years, or should I say waters broken, as the five girls have ten children between them and an eleventh on the way. What I don’t know about babies, child care (or the lack of it), pelvic floors and much more is not worth knowing. The conversation may have shifted but their sense of fun has not left them at all.

The weekend started on Friday evening, as, one by one, they arrived at the Old Chapel, each one impressing us with their navigational skills and following instructions. Over dinner, and a few bottles of wine, we broke the ice and learned where we all were in life. I brought out the list of all those who were on the trip, and despite the fact that the group of ’98 are dotted all over the world, they were able to let me know about who was where and what they were doing. It was not without the odd surprise! 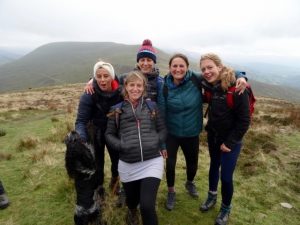 Nursing slightly sore heads and sweating alcohol for the first hour, we headed up the hill behind the Old Chapel. David Thomas and Digger came with us, to add moral support and to look after Jo, who is pregnant, should she need an escape route. By the time we reached the summit ridge we were in cloud, and that is how we remained for much of the walk, until it began to clear in the afternoon. Despite the fact that they do not walk on mountains regularly, they managed a good pace throughout, despite the wind resistance caused by their constant conversation.

We reached Gadair Fawr in time for lunch on the summit, before heading across the featureless, boggy plateau up to Waun Fach. The girls were encouraged by this because they thought I’d said “wine bar”, having now forgotten about their thick heads of the morning.

On the top of Waun Fach we came across a DofE group from Reading. Apparently they seemed to think it was necessary to explain that Reading was near London! The girls pointed out that they were walking with their old teacher! Less of the old, please. When they realised that I was offended they decided to tell people that David and I were a gay couple and they were our children! I nearly fell through my pelvic floor!

Descending to the col at the top of McNamara’s Track, David continued the descent with Jo while the rest of us climbed back up to the ridge, over Mynydd Llysiau as far as Pen Twyn Glas. Along the route we met another DofE group from Stroud. This time the girls introduced themselves as part of a much larger group, who, were unfortunately, in prison. In fact the girls were only on day release and I had to get them back later in the day. The DofE group sat open mouthed, not sure whether to smile politely or run. 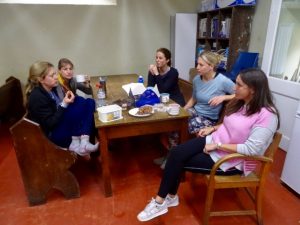 After 13 miles we returned to the Old Chapel for tea and rather too much cake. Lucy had some particularly good blisters on her heel, the result of having to borrow boots as she had left hers in France. The fact that she did not complain at all during the walk shows just how stoical she is.

Having gorged on cake, showered and changed, we headed next door to David and Annie’s so that the girls could enjoy a glass or two of Prosecco while easing their aching limbs in a hot tub. To add to the girlie treat, they each applied face packs with cucumber eye pads. Thoroughly spoilt! 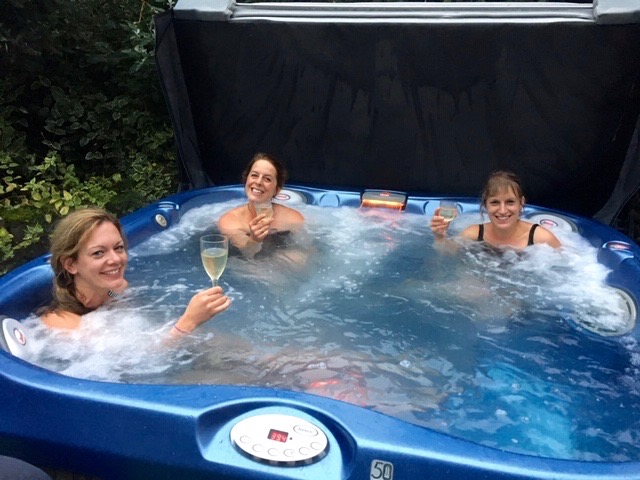 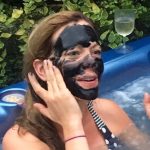 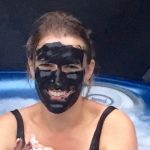 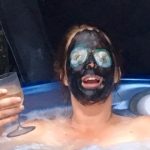 After a good night’s sleep, the result of not drinking quite as much alcohol, we set off to Ystradfellte to experience a spectacular series of waterfalls. After recent heavy rainfall, I was hoping that they would give the girls the “Wow” factor. Unfortunately, most of South Wales was hoping for the same, so the area was fairly busy. 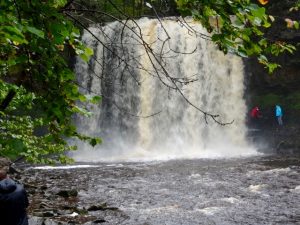 Walking along forest tracks, we headed to Sgwd Yr Eira on the River Hepste. This is the fall that you can walk behind on a safe, undercut rock ledge. You have to be prepared to get wet, which we did. The power of the water was phenomenal, sucking the air out of us as we breathed in. Spray was everywhere and we were immediately wet through. The volume of water tumbling over the lip was so vast that we were unable to see through it. 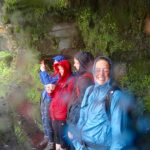 Climbing back up we ventured to the Afon Mellte, where were were to encounter a further three waterfalls. The first, Sgwd y Pannwr is at the end of a long limestone pavement. The water tumbles down over two ledges into a wide plunge pool. On other occasions I have seen canoeists drop over this fall, but I suspect there might have been a little too much water.

The next fall, I think, is one of the most spectacular. Sgwd Isaf Clun-gwyn is a wide, slightly horseshoe shaped fall that does not have a plunge pool but falls into a series of white, foaming cascades. It is possible to walk through the fall to a ledge behind, but care has to be taken as the power of the water can send you down the cascades with horrible consequences. 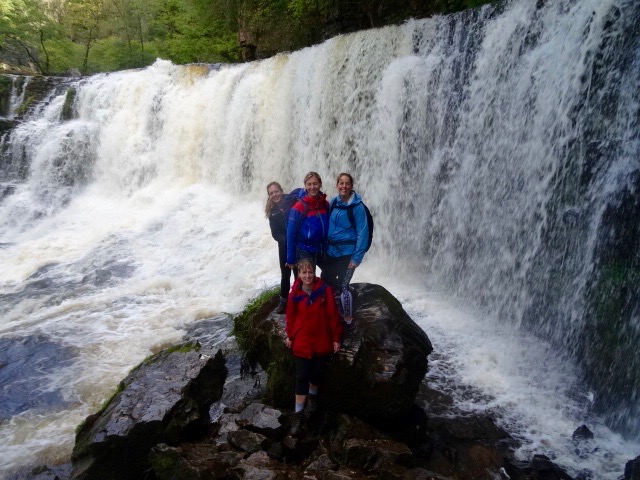 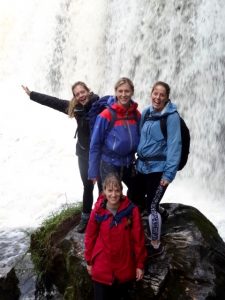 The final fall, Sgwd Clun Glyn, is the highest of the four falls and is where we had a bite of lunch. All we had to do now was return to the car park and head off to our different homes. As we walked back, the realisation that the weekend was coming to an end, dawned, and the conversations moved away from children to what next. There is a clear desire for more, perhaps a paddle along the River Wye next year followed by ambitious plans to take the adventure much further afield. And why not, life is for living. 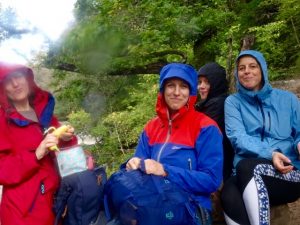 We had a super weekend. The sixth formers I took to Nepal in 1998 have grown to be delightful women with great personalities and an appetite for fun. I am really looking forward to sharing more adventures with them. In the meantime, I am looking forward to getting back to our normal walking conversations concerning aches and pains, Stennah stairlifts and funeral plans!

Special thanks to Angela, David and Annie for joining in and looking after us so well.