We left our cottage just before 8.00 and drove down to Akaroa for our swim with dolphins experience.  Following a brief introductory chat we, along with six fellow travellers, suited up in very thick wet suits.  I hoped swimming would be easy in mine because walking was not.  I felt like one of those animals that is very elegant in water but ugly on land.  Despite the fact that it is summer the air temperature this morning was only 11°C and the water slightly higher at 14°C.  It was cloudy and while I was initially optimistic that the cloud was going to burn off, it proved that the opposite was going to happen and we were hit with squally showers.  There was also a stiff breeze blowing.

All suited up, we waddled aboard and set sail, immediately heading out towards the mouth of the inlet.  The further we went the rougher the sea became.  We spotted a pod of Hector’s Dolphins, the smallest a rarest breed of dolphin.  There are now only 7,500 of them left and the numbers are still declining despite the valiant conservation work being done at Akaroa.  The problem is that they get caught up in a set net, which drowns them.  Those nets have been banned around Akaroa but are still used in other areas of New Zealand.  So, while the numbers are improving around Akaroa, they are declining at a faster rate elsewhere. 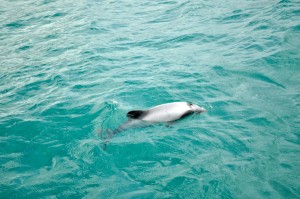 This first pod included a mother and baby, which meant we could not swim with them.  The baby spends two years closely bonding with its mother and nothing must happen to disrupt that bonding.  The baby drinks mother’s milk approximately every three minutes, so you can imagine the disruption eight human swimmers might cause.

We moved further out to sea, between the two headlands and the swell increased to about 12 feet.  Angela was finding it a bit difficult to cope with but managed to concentrate herself through it.  We found another pod, which swam around the boat but now the sea was too rough for us to get into.  We headed over towards the northern side of the inlet where there was a chance the water would be calmer.  However, before we got too far we came across a third pod of five dolphins.  They seemed reasonably curious so we gently lowered ourselves off the back of the boat into the water.  I was expecting to have to take a sharp intake of breath but, in actual fact, it was not necessary.  The swell was still about 12 feet but now the waves were regular.  We bobbed up and down, treading water, and making noises to attract the dolphins.  Singing down a snorkel tube was recommended, so I tried ‘If you’re happy and you know it clap your hands’.  Maybe the dolphins did not like my singing but they clearly did not want to play and while they made a couple of approaches to us, we did not really have the interaction we were hoping for.  It was exhausting in the water and after about 15 minutes we decided to get out.  Our captain and dolphin guide both decided it was not going to happen today and took us back to the wharf at Akaroa with the promise of a partial refund.

It was still a pleasurable experience and we did at least see dolphins swimming around the boat and we also saw the world’s smallest penguin swimming by the boat.  Angela mistook it for a duck to begin with!

Following a warming cup of coffee we headed back to Christchurch, not by a direct route but by a scenic one.  We climbed up our of the crater and took a road that skirted around the rim, giving us stunning views down to Akaroa on one side and similarly stunning views down to bays set between lava flows on the ocean side.  They were tantalisingly beautiful so we took the opportunity to drive down to Le Bon Bay for a picnic lunch on the beach.  It was 10km down to Le Bon Bay through a beautiful valley with lava flow ridges down each side.  At the end of the valley, behind the beach, is a small community living in an idyllic setting.  To make it even better the sun came out, rewarding me for my optimism of earlier in the day.  The beach was deserted and we had it all to ourselves, and a few optimistic gulls that thought we might give them a crumb or two.  There was one who was particularly aggressive towards it fellow gulls and would do anything to keep them at bay.  If food was on offer he was going to get it first.

After a relaxing and entertaining lunch we continued with our drive to Christchurch.  Our accommodation in a house in the suburb of Papanue is superb in every respect.  We were made to feel very welcome and the facilities are outstanding and really good value for money.  Half way up the stairs there is a large case on its side.  It has fallen over so many times during quakes that it now cannot fall further.  There are very few ornaments in the house, all having fallen from their shelves during the big quake or one of the thousands of aftershocks Christchurch has experienced since.

Kate Richardson came to pick us up at 5.30 and take us to their house.  Kate and her family emigrated from Worcester two years ago and their house fell victim to the earthquake, so are in temporary accommodation until their house can be rebuilt. 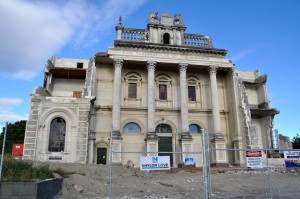 The damaged Catholic Cathedral in Christchurch

After meeting them we were taken on a tour of Christchurch, starting with their house down the road.  Remarkably, it can be rebuilt and made earthquake proof.  The city centre is a scene of devastation.  Much of it is fenced off and out of bounds as the whole of the centre is being demolished, block by block.  Many people have not been able to return to their properties to retrieve their possessions as the buildings are too dangerous to enter.  Stone built buildings faired worst as they are too rigid and lack the flexibility of wooden and modern structures.  Hence, churches, including the Catholic and Anglican cathedrals came off really badly.  We could not get any where near the Anglican cathedral where the spire came crashing down.  Many buildings were fenced off and the fallen masonry still lay on the ground as it had fallen a year ago.  The whole experience really brought home the devastating effect that an earthquake has on a community and the infrastructure.

Following a very pleasant evening, sitting around the garden table, eating a lovely meal and catching up on each other’s news, Angela and I strolled back to our lodgings for the night, well satisfied with our day.

Naturally I had some misgivings about our sea trip but in retrospect I am thrilled to have done it and more than a little proud that I swam and sailed in 12ft swells and wasn’t seasick!  The dolphins were very cute, small and beautifully coloured in tones of blue/grey.

Back in Christchurch we settled into another immaculate and well equipped B & B, before being scooped up and taken on a guided tour by the Richardson Family who moved here from Worc. 2 years ago. Their house was badly damaged in the quake a year ago so they are in rented accommodation nearby.  They drove us into the city and the devastation is shocking.  They have had 10,000 quakes, 20 of which have been significant!!! But they are philosophical about it and still happy with their lot.  We had dinner with them and were made very welcome.  Kate (who I taught when she was 7 is now 21 and going off to Uni in Auckland soon)