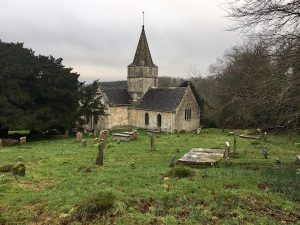 28th January 2018, and the warmest day of the year, so far. Fourteen of us met at the unique church in the centre of the village. Built in the usual cross shape it has four distinct areas, which are largely separated from each other. Whilst the stonework is relatively plain and austere, the ends of the pews are beautifully carved with figures of men and women. These did not originate in the church but came from the banqueting hall from the 1st Earl of Bathurst’s manor house when it was demolished in 1730. One of the transepts has floor to ceiling wood panelling. Both transepts also have intricately carved memorials, the most elaborate to the Poole family who were the earlier owners of Sapperton Manor. (What a shame Kevin and Gerry were not with us!) 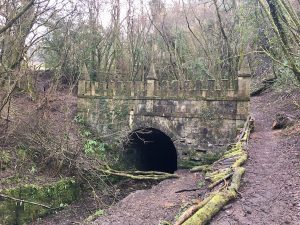 Entrance to Sapperton Tunnel at Sapperton

Leaving the village, we soon came upon the turreted portal for the Danewood end of the Sapperton Tunnel on the Cotswold Canal that linked the River Severn with the River Thames. The tunnel is 3.5km long and we would be seeing the other end some hours later during our walk.

The tunnel was built between 1874 and 1879 and must have been a magnificent piece of civil engineering in its day. It still is, although the canal has fallen into disrepair, with little or no water, overgrown with trees and shrubs, and, unfortunately, in a couple of places, a dumping ground for unwanted rubbish. Nevertheless, as we walked on the towpath with the canal basin on our right and the River Frome just a few yards to our left, there was a sense of history.

Standing alongside the canal is the the Daneway Inn, built originally as a barracks for the many navvies employed to build the tunnel. It was converted into a public house in 1807, and started that phase of its life as the Bricklayers Arms. As we were only 20 minutes into our walk by the time we reached the Daneway, it was far too soon to consider stopping for any form of refreshment.

Eventually, we left the old canal towpath and climbed steeply on a vague track, made slippery by recent rain, up through decaying woodland to cross the Great Western Railway line linking Worcester with London, and continuing the climb up to a lane. We had just done the bulk of the day’s climbing. 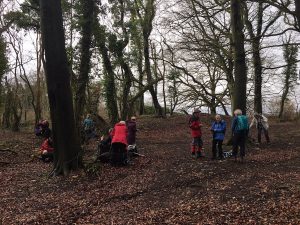 Taking a quick break in the beech woodland

The next section of the walk took us over another feat of engineering achievement, a railway tunnel. As we walked through a woodland, largely of beech trees, we were walking directly above the railway. Looming out of the trees we came across an enormous brick ventilation shaft, the purpose of which, when it was built, was to allow the smoke from steam engines an escape route. Now they released diesel fumes.

We crossed the busy A419 to follow a rutted and muddy track for about a mile until we reached a junction with the Macmillan Way, which we then followed. It was a welcome relief to be out of the woodland with far reaching views over the surrounding countryside. It may have beed the warmest day of the year so far but there was still a brisk breeze which meant that taking lunch might be a chilly affair. Luckily there was a hedge that gave us some protection.

Passing through the hamlet of Tarlton, a cluster of large, opulent Cotswold houses, we soon reach the Tunnel House Inn. Like the Daneway, this too was originally built to house navvies building the tunnel. Many accidents with huge losses of life occurred during the five years it took for the tunnel to be built, and on several occasions it was used as a mortuary. Once the tunnel was completed it became a place where the leggers resided to leg barges through the 3.5km of tunnel. To do the work well they required several pints of beer, so it was turned into an inn satisfying the needs of the leggers. 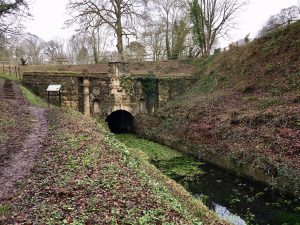 Probably the finest canal tunnel portal in the country

Just below the now modern inn serving excellent food and drink and catering for a great many visitors, is the other end of the tunnel. This portal is even more spectacular than that at the Sapperton end, with built-in niches for statues, although there are no statues there. This section has crystal clear water in it with water plants of a very vivid green. Above us a bat flew around, brought out of its tunnel dwelling by the rising temperatures.

We now followed the canal again passing under Skew Bridge carrying the railway over the canal. The brickwork for this bridge was fascinating and caused some conversation as to how the builders managed to build something diagonally across the canal but with the sides parallel. 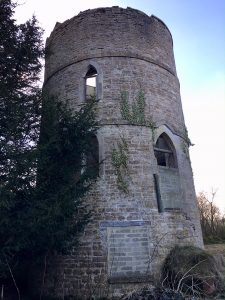 A little further on we came to a three storey round house at a point where the canal narrows but where there wasn’t a lock. In any case the level of the canal floor was the same either side. This again became the focus point of our conversation, wondering what its function had been during its heyday. Initially, we decided it was a toll house for the nearby tunnel, which seemed reasonable, and I would have been  happy with that. In fact, it was a lengthman’s cottage. A lengthman was a worker who looked after the maintenance of the canal. On the ground floor there was stabling for horses, the heavy machinery of the canal system, and the roof was inverted to collect rain water. Although the floors and roof are gone, it is still structurally sound and would make a great “Grand Designs” project for somebody, if the estate of the Earl of Bathurst was prepared to sell it. 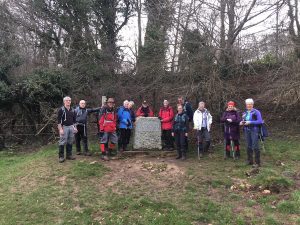 The Source of the Thames

We eventually reached a bridge where we diverted from the canal to head across the edge of some fields to the source of the Thames. If you were expecting something really dramatic, you were going to be disappointed. The spot is marked by an inscribed stone, although the inscription is impossible to read, lost in the natural markings of the stone. There is a small stone filled depression in front of the stone but there is a distinct lack of water. A finger post points to the Thames Barrier, 184 miles away. Had we followed the direction of the finger post for about a mile, somebody reassured us that we would see a flowing stream. 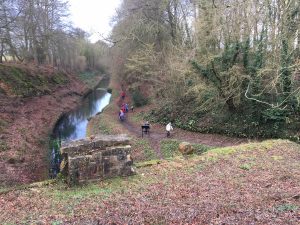 Returning the same way to the Tunnel House Inn, we then proceeded to walk through woodland above the tunnel. All along the route there were little mounds. These are the spoil heaps from the tunnel construction. Over the 3.5km distance a line was drawn across the surface of the land. At twenty six points along the distance shafts were dug of varying length according to the undulations in the terrain. They varied in depth from 30 – 200 feet. From the bottom of each shaft, navvies dug horizontal tunnels following the surface line so that, eventually, each shaft was joined to the next, forming the tunnel. Without any mechanical tools it must have been gruelling, back-breaking work where there was enormous risk. It is hard to imagine, but what a incredible piece of engineering. The fact that, after 230 years, all but about 500 yards of the tunnel is either in good shape or needs minor restoration, is testament to the workmanship of those remarkable navvies.

After 11.3 miles we were back at Sapperton enjoying a post walk drink in the garden of the Bell Inn, a thriving village pub and restaurant. Despite most of the route being muddy, it was a good day out and a real pleasure to get some fresh air and exercise with friends.