We have had some glorious autumnal weather recently, with plenty of sunshine. Unfortunately, as we gathered in Kington, it rained quite heavily, but with the promise that it  would clear up as the day progressed. However, with the passing of each shower, the temperature seemed to drop several degrees as an icy blast swept down from the north. It was cold. For somebody who tends not to feel the cold, I could feel it this morning as I prepared myself for a ten mile circular walk from the centre of this pleasant border town. I cannot remember when I last wore five layers.

By the time we set off the rain had ceased, and it remained largely dry for the rest of the day. There were showers scudding by on a freshening wind but they seemed to bypass us. There was a lot of sunshine and with the sun so low in the sky, the light was stunning. The clear, cold air meant that the views were far reaching and that the clarity hardly diminished with distance. As it was Remembrance Sunday we paused fro two minutes of reflection at 11.00am, and I can’t think of a better place for that to happen, with far reaching views reminding us of our freedom, a freedom that so many have sacrificed their lives for. 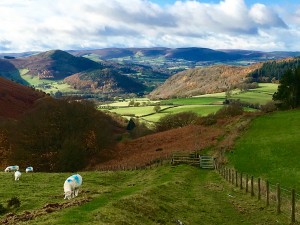 We were following Offa’s Dyke out of Kington, yet there were no discernible ancient features to tell us that was what we were doing, not until we reached a high point across some fields where there was a clearly defined dyke, which we now followed closely, until we veered off to climb to the summit of Herrock Hill. The low sunlight accentuated the golden browns of the bracken and trees, a stark contrast to the vivid greens of the fields in the valley floor. Even the Radnor Hills in the distance looked inviting on such a glorious day. 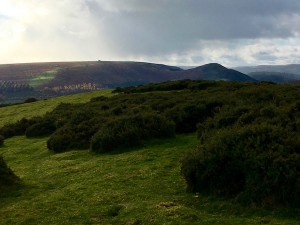 Stopping for “first” lunch on the top of Herrock Hill, we had a magnificent 360 degree panorama of the Herefordshire and Welsh hills, and beyond. To the east we could see the Malvern Hills with the Cotswolds behind, to the north the Clee Hills, the Long Mynd and the Stiperstones, to the west the Hergest Ridge with it tell tale clump of monkey puzzle trees on the top, and to the south the Black Mountains. There seemed to be showers all around us with the occasional hint of a rainbow rising from the valley floor but disappearing long before it could make a full arc. It was a very pleasant place to be on such a glorious day.

After lunch we descended into the valley in order to make our way to the Hergest Ridge. As we did so we were hit by a sudden, prolonged, gust of very cold wind, and were thankful that we were not still fully exposed to it on the top of the hill. 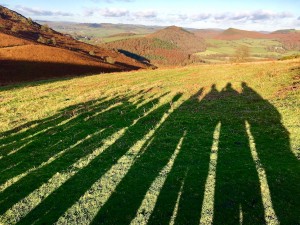 Having crossed the valley we skirted round the edge of a small hill in order to gain access up to the ridge. We stopped part way up to eat “second” lunch, enjoying the sheltered sunshine. Continuing, we were now walking directly into the sunlight just above the ridge, blinding us and forcing us to keep our eyes pointed towards the ground. Nearing the top of the ridge we could look back at virtually the whole of our route with our shadows stretching a long way across the tussocks of grass. This was now the best part of the day, the showers had passed and the skies were beautifully clear. 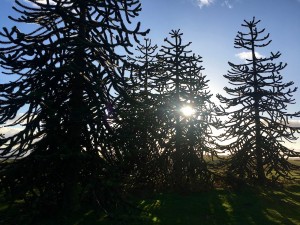 Soon afterwards we reached the summit of the Hergest Ridge, crossing the Victorian racecourse to reach the cluster of monkey puzzle trees. I thought these were planted to commemorate one of Queen Victoria’s jubilees, but were, in fact, planted by a keen gardener who noticed that the climate on top of the hill was similar to that of their native Patagonia. Despite being subjected to everything the weather can throw at them they seem to be thriving.

From there it was a gentle descent all the way back into Kington. We had covered exactly 10 miles.