Woke up to a gloriously sunny morning with not a breath of wind and the surface of the water was again like glass.  I was feeling excited at the prospect of going sea fishing and catching our meal for later in the day.

We had booked a four-hour fishing trip for the seven of us (no girls allowed!  This was men’s work).  Our prime target was Snapper, a very handsome fish and one which would provide a handsome meal.  We had been told that there were lots of them and we would be catching 5-6lb fish.  Our guide, Brett, a builder/fisherman, took us five miles up Kenepuru Sound to a spot adjacent to some mussel beds where he had had some success on earlier missions.

I have never actually been sea fishing before so, although I listened intently to his instruction, I was sure I was going to forget most of it when the action started.  Our rods were already set up, all we had to do was to load the hook with bait (we were using pilchards) and cast away.  It took a bit of getting used to at first and it didn’t help that the seven of us were crowded into a fairly small place.  A number of us found a pilchard dangling in our faces as we battled to get our first fish. 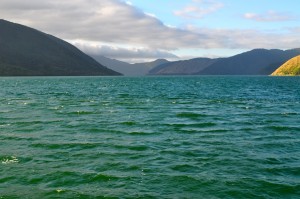 Ben and Stephen both caught a fish within two minutes of casting their lines.  It was exciting and it looked as if we were going to land loads of fish.  After another five minutes, when nothing had happened, Adam turned to me and said, “You’re bored, aren’t you?”  I must confess that I was a little disappointed that the fish had not leapt at the chance for me to catch them.  After several more minutes I reeled my line in to find no pilchard on the hook.  The Snapper are obviously a lot smarter that I had thought and can take the bait but not the hook.  Nobody told us about that.  This happened on several occasions and it was becoming a real challenge to catch one.  After about ninety minutes I felt a tug on the line.  I had got one!  The rod strained under the pressure.  I pulled the rod skyward and as I dipped it down towards the water I reeled in the line.  I could feel the fish fighting against me.  The rod strained further and it was clear this was a bigger fish than any caught so far.  Everybody was willing me to reel it in and Brett was giving me instruction.  Wow, this was fantastic!  My first fish!  I pulled the rod up towards the sky again and suddenly all pressure was gone.  The line had snapped.  Deflation and disappointment set in but with a tinge of excitement as to what might have been. 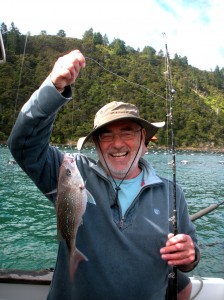 Damage repaired, I cast again and waited and waited.  Some of the others already had the satisfaction of catching something.  I was afraid that we were going to stand here for four hours and I would have nothing.  I found that if I held a finger on the line I could more easily tell when a fish was nibbling the bait, rather than just watching for the end of the rod to twitch.  Half an hour later my concentration paid off and I felt a nibble and was able to detect when the fish had properly taken the bait.  The rod strained and I began the process of drawing in the rod and reeling in the line.  I was not going to let this one get away if I could help it.  I could feel the fish thrashing around on the end of the line but I could also feel that I was winning this time.  Soon the fish came into view as it neared the surface, and then it was out and in the boat.  I had caught my first fish.  I was so pleased.  I was particularly pleased by the end of the session because that was the only fish I caught.  Naturally, I would have preferred to have the excitement to have lasted longer and been more often, but it became clear that fish naturally do not want to be caught and that it is a challenge for both fisherman and fish.

In total we caught ten fish, all Snapper.  We were going to eat.  Returning to the jetty at Portage, Brett filleted the fish for us and also gave us the wings, which he said taste of chicken.  Stephen had a go at filleting, getting some experience for when he catches fish in Indonesia.  Brett had also gathered a bucket of enormous green mussels for us to take home.

We decided not to waste any time and cook our spoils for lunch.  Twenty fillets, ten wings and a million mussels plus salads, bread and a load of extras fed 12 very easily.  There is something very special about eating food you have worked for and is extremely fresh.  Despite periods of minor boredom and frustration, it was a really enjoyable four hours and gives me the desire to do something similar again.  There cannot be many more beautiful places in the world to go fishing. 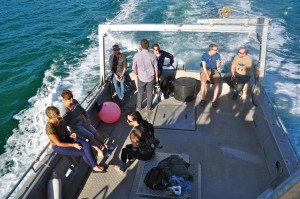 After recovering from the feast, ten of us chartered a boat to collect us at 5.30 and take us up Kenepuru Sound to have a look at Havelock.  It was a stunningly beautiful evening and we drank beer, wine and champagne on the ninety-minute journey through the sound.  By the time we docked in Havelock there was no time to have a look so we went into the Slip Inn, on the waterfront and had dinner, a superb meal. 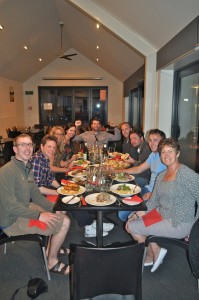 Havelock is the mussel capital of the world but none of us could face more mussels after our lunchtime feast, which is probably a bit of a shame.  My steak was fab.

Soon after 9.00 we piled back on to the boat for the journey back to Portage in the dark.  Stephen took to the control and it was interesting watching the sonar picking up the shoals of fish beneath us.  If we had had sonar in the morning we might have been able to catch more fish.  While Stephen was driving, the captain brewed tea and coffee, although there was something rather special to liven them up.

While the ‘boys’ went fishing Anna and I had some girlie time, showering, hairwashing and generally chilling out and chatting, even though it turned out hot in the sun!  The house we are renting is very comfortable with all mod cons including a spacious deck with gas bbq and amazing views.  The bbq came in to its own when the fishermen returned with their ample catch of snapper and mussels.  13 of us sat round the table and ate and drank merrily.