Monday 24th November dawned bright and cold with crystal clear skies and the first real frost of the winter. A good day to get out on the hills.

In February, and again in March, I have the dubious pleasure of guiding 60 French teenagers and their teachers in the Brecon Beacons National Park. They only want a walk for 2.5 – 3 hours. This presents a number of problems. They will be arriving by coach for which narrow lanes, lack of parking facilities and no suitable turning places make access difficult and lengthen the walk beyond the time allowed. February and March can be temperamental with the weather and to have a group insufficiently kitted out would be dangerous. Finally, with such numbers involved, each obstacle would delay progress significantly. Even if it only took each individual ten seconds to cross a style it would still take ten minutes to get everybody across.

Discussing the issue with David Thomas we decided upon Sugarloaf as the best option. It is relatively accessible to transport on the Abergavenny side, it is not too high and therefore potentially achievable, and even if there is too much snow on the higher slopes there are still circumnavigational routes that could still fit the bill.

With that in mind, David and I met in the car park for the Abergavenny Leisure Centre attached to King Henry VIII School. This was the nearest accessible car park for a coach. David had his dogs with him, a lively pair of spaniels with the combined capacity to drag you up any hill. 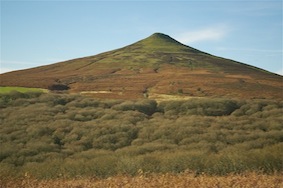 Leaving the outskirts of the town behind we headed up the wooded valley known as The Park. The now leafless beech trees looked majestic as their strong looking grey trunks pierced the blue sky above. It was a steady climb all the way up the valley and, although not steep, it seemed to be taking a long time before we seemed to be getting anywhere. There was not a breath of wind. Despite the air temperature probably still being in single figures, it was very warm. I had far too much clothing on. Towards the top of the valley there is a middle aged oak woodland that I had only ever seen from above before but never walked through. There is something special about a forest of oaks – they may not be the tallest trees but they are tree royalty. By the time we emerged on to the open hillside we had been going for well over an hour and a half and we were still 170m short of the summit. Realisation dawned that this was not going to work; it was too long and potentially too difficult for a significant percentage of the group depending upon their levels of fitness. 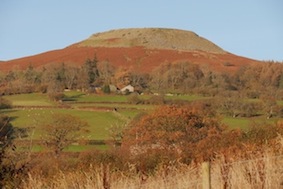 Abandoning any desire to head for the summit, we headed back down the ridge known as the Deri, a long finger pointing south to Abergavenny. Whilst it would have been very pleasant to go on to the summit and see the very clear expansive views, I had other ambitions for the afternoon. Further discussions with David, as we descended, came round to the view that Table Mountain, above Crickhowell, was probably the best option for such a group. The coach could easily reach Llanbedr where there was ample room for turning and a parking place. From there Table Mountain was easily accessible and there would be minimal obstacles to slow us down. We also agreed that where we had just been, plus venturing on to the summit and meandering around the open hillside before descending would probably make a good winter day walk for a group at some point in the future.

Having finished, David went to photograph Table Mountain so I could send a picture to France while I went to explore the Skirrid, a hill I had admired for many years but never been up. It is the start point for the first of a series of walks I am doing at next year’s Crickhowell Walking Festival, linking up sections of the Beacons Way. I wanted to have a look at the route and to determine how good the signage is. Judging by what I saw the signs are well placed and numerous. 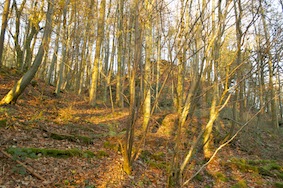 The car park on the B4521 was surprisingly full for a Monday but as the weather was so beautiful it was also to be expected. The walk climbs quite steeply up the southern end of the hill, through Caer Wood. Despite the fact that the National Trust have done a lot of work to maintain the path, the recent spells of rain have rendered it quite muddy in places. the brilliant sunshine illuminated the trunks of the trees and it was surprising just how colourful the woods were despite the lack of leaves. The mosses on the northern side of the trunks was luminescent in the damp conditions. 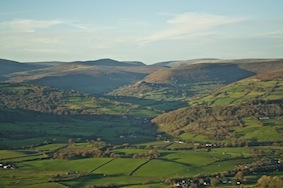 Emerging from the wood I came out on to a narrow ridge climbing gently towards the summit at the very northern tip. The sun was gradually dipping towards the west, casting a stunning glow on the Black Mountains, a mixture of vivid greens and golden browns. To the east I could look over the area of Herefordshire where we had walked in September on the Three Castles Circuit. There it was predominantly vivid greens dotted with grazing sheep. The only castle that should have been visible was White Castle but it was difficult to distinguish the grey stone from the grey trees around it. The ground fell away steeply on either side and ahead, at the summit, it fell away sheer to the west. Below the remains of an ancient landslide protrude creating a second lower ridge. This is believed to have happened shortly after the last ice-age. 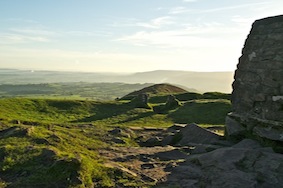 Looking south along the ridge from the summit

Reaching the summit, having climbed approximately 300m, I took time to enjoy the 360 degree vista. To the east were the Herefordshire hills with the Malverns behind. To the north, Clee Hill, The Long Mynd and the Stiperstones of Shropshire. To the west the whole of the Black Mountains with a hint of the Brecon Beacons beyond. To the south the Usk snaking its way across the expanse of farmland as it headed towards its final destination in the Bristol Channel, which could also be seen. Also to the south, the sun reflected off numerous glass or metal surfaces in Abergavenny, giving the appearance of the town being on fire. 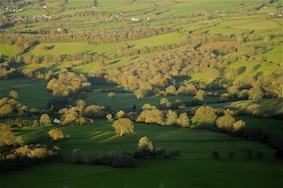 Immediately north from the summit

On the summit are the remains of a small chapel, hence Skirrid being known as the Holy Mountain. Historically it has been a place of pilgrimage and there are a number of interesting legends associated with the hill.

From the summit the Beacons Way retraces itself for a couple of hundred metres before descending down the east side and continuing north. This avoids descending by the very steep nose immediately below the summit. Instead of following the Beacons Way, I turned and contoured south around the hill, back into the woods until I picked up the path by which I had ascended. As I reached the car the sun was just disappearing behind the hills to the west and the temperature began to drop appreciably.

Days like this are made for walking on the hills. They don’t have to be high to be enjoyed.