With a walk planned for next month I thought I ought to take the opportunity to have a look at it, although the Black Mountains is an area I know well. Having listened to an improving weather forecast I set out last Sunday to find, by the time I reached the car park, I was shrouded in thick mist and the rain was falling heavily. According to the forecast on my phone there was little chance of improvement throughout the day, the Black Mountains not necessarily complying with climatic trends elsewhere. It is best when you are doing a recce to be able to see so I abandoned my walk without bothering to change into my boots.

I had decided I was not going to do the planned walk from Hay Bluff along Offa’s Dyke, dropping into Capel-y-ffin to then climb up to Twmpa before returning to the start point. We have all walked Offa’s Dyke, which can be boring at the best of times. We have all slithered on the descent to Vision Farm and wallowed in the mud along the track to Capel-y-ffin. None of us needed to do those again either. So I decided to go where we had not been before and explore the northern escarpment of the Black Mountains from the two perspectives of high and low. 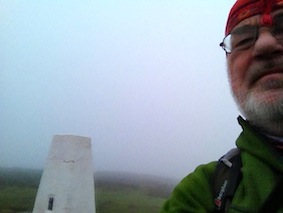 Mist on the top of Hay Bluff

Yesterday, Tuesday, held more promise, so I set out again to find the tops shrouded in cloud but, this time, with a much better chance of breaking free from it. It was chilly when I emerged from the car and for the first time this season I wore two fleeces, a hat and gloves. Heading into the mist I climbed the steep path up to Hay Bluff. The wind was coming from the south, so once I reached the ridge the mist doused me in a very fine spray. As I descended towards Gospel Pass the mist began to thin and blue sky could be seen through it, Twmpa (Lord Hereford’s Knob) kept emerging and disappearing again, but the signs were there that it was going to clear and be a spectacular day. Already it was much brighter to the south and by the time I reached the summit of Twmpa I was bathed in not-so-warm sunshine. To the east Hay Bluff was still shrouded.

The walk along the top of the escarpment is beautiful, not for the features on the top but for the occasional glimpses down the face into gullies, and for the far reaching views across the Wye Valley to the hills and mountains of mid-Wales. The colours were stunning with the browns of the now dead bracken contrasting with the vivid greens of the well watered grass. The trees still held a little colour but they were clearly fading fast and they prepared for their winter sleep. One worrying aspect of this walk, particularly having passed the trig point on Pen Rhos Dirion, were the many tracks created by off-road motorbikes, churning up the fragile grasses, obliterating the path and turning the area into a quagmire. The tracks cover an area at least the width of three lanes of a motorway and is clearly a playground for those who should not be there, but are difficult to control. 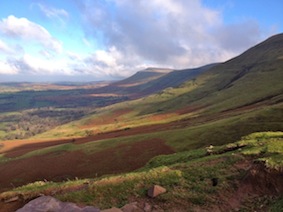 On reaching the deep cleft that is Cwm Cwnstab I descended by Rhiw Cwnstab. The route is so named, I am led to believe, from the time when construction workers were building the Grwyne Fawr Reservoir, started in 1912, interrupted by the First World War, and concluded in 1928. Down valley from the construction site a village, Blaen-y-cwm, was created for the workforce, which included all the necessary facilities of a school, chapel and pub. The latter was very popular, particularly on pay day when a surfeit of booze encouraged the men to brawl. Usually a young lad would be sent over the hill to Talgarth to summon the local constable who would walk over to sort matters out, thus the route became known as Rhiw Cwnstab. True or not it makes for an interesting story. The view on the way down this route is stunning and on a good day is an ideal spot for lunch. Looking east you have the crenelated slopes as far as Twmpa to admire. To the north the patchwork of fields and moorland sloping down to the River Wye with the hills of mid-Wales rising beyond. To the west is the even more stunning northern escarpment of the Brecon Beacons, although not as clearly defined in the late autumn haze.

The walk so far had been very easy to navigate and I was expecting more navigational decisions to be made on the return along the foot of the escarpment. The map shows a wide variety of paths crisscrossing each other with no direct line to follow. However, on the ground, while there were many paths to follow, there was one which seemed to follow a direct west to east line. Being at the foot of the escarpment it tended to be quite wet and muddy in places where run off had gathered in the grooves, largely created by livestock, that make up the path. The path undulated without being too arduous, although there is one climb a little longer than the others as I chose to stay high over a spur running off Twmpa. As I rounded the spur Hay Bluff came into view, or at least it would have had it not still been shrouded in cloud.

Walking on my own it had taken me five hours to cover the ten miles. I only stopped once, for twenty minutes for lunch. With a group it will take a little longer. I never tire of walking in the Black Mountains but it is refreshing when you do a route you have not done before. I have walked along the top before, mostly in a west to east direction, but I had never done the lower level return before and it makes for a very interesting and pleasurable walk. It does need reasonable weather to gain the most from it.  I saw not a sole all day and as I looked back at Twmpa from my car it displayed itself atmospherically in moody lighting. I think those who join me next month will enjoy this walk.