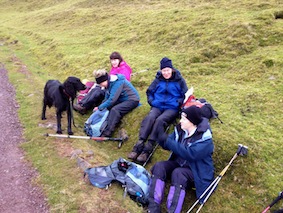 Ann, Helen, Liz and Shona – the brave ones

A combination of Christmas looming and an atrocious weather forecast for the Black Mountains resulted in a limited turn out for this lovely walk. The forecast warned of winds of 55-60mph at 400m with driving rain. The temperature, because of wind chill would only be a degree or so above freezing. Not the pleasantest of conditions for a 10 mile walk and, I guess, if you were walking alone you would decide not to go. But I wasn’t alone. I had four intrepid ladies and a dog to consider and when you have spent an hour and a half in a car your body is ready for some exercise. In any case, the weather was nothing like as bad as the forecast had suggested. It was windy, but not that windy. There was moisture in the air but not a lot. It was cool but it was mid December. What do you expect when you go out on to the hills? So, always prepared to cut the walk short or deviate from the planned route should the need arise, we set off up the steep slope to Hay Bluff.

The wind was certainly stronger, but not impossible. The moisture in the air suggested it might be a good idea to put waterproofs on, but it wasn’t unpleasant. Along the uppermost reaches of Hay Bluff water had frozen overnight leaving behind a thin layer of ice which crunched under our heavy boots. The base of the cloud remained a few meters above our heads and there were occasional glimpses of brightness on distant green fields in the Wye Valley.

We were now walking into the teeth of the wind and it would be so until we dropped down off the ridge in five miles or so. It was good to be out, to feel the elements on exposed skin, to be warmed by the exercise and not to see another sole on the hills. The forecast must have put so many off. From Hay Bluff we descended to Gospel Pass, a point of escape if we chose, but didn’t, we continued to climb Twmpa, or more humorously called Lord Hereford’s Knob, and on to Dirion across the water laden peat bogs on the top. Something needs to be done about the motor bike scramblers who plough up this fragile environment with their heavily treaded tyres and potentially ruin it for ever. It was while walking along this stretch that the wind suddenly changed and came from the north. 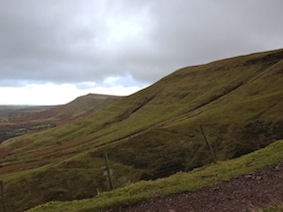 Lunch with a view

My plan was for a lunch stop at a point where we would be sheltered from the south-westerly. Now we would be exposed. As luck would have it, by the time we reached lunch the wind had changed again and we had the pleasure of sitting in sheltered calm in the valley on the route down the Rhiw Cwnstab with views back along the escarpment. The heavy cloud muted the colours of the contrasting greens and browns but it was still a good place to be and we were all glad that we had made the effort.

After lunch we descended further and made our way beneath the escarpment. Looking up at the wall of mountain was probably more impressive than looking down from the top. The dull light meant that every feature was visible, every rocky outcrop, every nook and cranny. Ironically the lack of sunlight, and therefore shadow, highlighted the features.

We were keeping very well to the time plan and the weather showed no sign of deteriorating despite the forecast for it to do so. That is, not until the last 200m back to the cars, during which the rain fell more heavily and steadily, driven by the wind. Had it come earlier in the day, it might have been a less pleasant walk. As it was we were satisfied with our determination and deserved the cup of tea and cake at the Granary in Hay on Wye before heading home.

This is a really beautiful walk, not too arduous, but with stunning views. It will be worth repeating on another occasion, with a larger group and a guarantee of more settled weather. Next year, maybe.