2014 has been a bad year for Nepal as far as climbing and trekking is concerned. First, on the 18th of April, a devastating avalanche fell into the Western Combe near the top of the Khumbu icefall, which wiped out the lives of sixteen Sherpas and affected the lives of many more. Now, on the 14th October, a severe storm, the result of cyclone Hudhud, dumped copious amounts of snow in the Annapurna region, triggering avalanches on to trekkers caught in the wrong place at the wrong time. At the time of writing the death toll stands at 39 and there are still people unaccounted for. It is no longer a case of searching for survivors but looking for more bodies that the melting snows will eventually reveal.

As sad as these two incidents are, I am not surprised that they have occurred. Both accidents are the result of over-commercialisation of Everest and of the most popular trekking routes in Nepal. 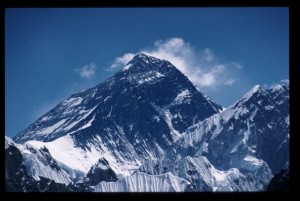 Let us consider Everest first. Everest has become a high altitude playground for people who have the money to climb the mountain, even if they don’t have the skill. Without the skill they rely very heavily on the Sherpas and commercial leaders to get them to the top. There is a belief among many of the climbers on Everest that because they have paid a lot of money they expect success. The result is that, because the weather window is so brief, a long queue of people can be seen heading up the Lhotse face to the South Col. Having reached the South Col they all head off for the summit together, jostling for position to get up the Hillary Step. Some find themselves waiting a long time at this bottleneck, risking frostbite, running out of oxygen, running out of time, possibly dying. Even if you manage to get up the step and on to the summit, you then have to wait for the opportunity to get down the step; it is a 29,000ft. single track road.

Last week I was fortunate enough to attend a debate at the Royal Geographical Society entitled ‘Everest’s Deadliest Day’. The evening was hosted by Ben Ayers with Doug Scott, Dawa Steven Sherpa, Rebecca Stephens, Simon Lowe and Ed Douglas on the panel. They all have different perspectives of the Himalaya from commercial interests to philanthropic concern. They all gave valuable contribution but those of us in the audience wanted to know how a similar tragedy could be avoided in the future. Of course, nothing can be guaranteed in the mountains, mountains are very fickle when it comes to human life. However measures can be taken if there is a universal will among the climbing community, mountaineering associations, governments even. Doug Scott has a simple solution to prevent the cash rich from venturing on the mountain with little or no experience. Each climber must have a climbing CV, which includes ascents of 6000m and 7000m peaks, before they can even apply for an Everest permit. If they are genuine in their desire to climb Everest it should not put them off, but should excite them. It won’t diminish the income the Sherpas can make out of climbing as there will be just as many climbers in a season, hopefully not all in the same place. Everest will become safer with fewer climbers and the opportunity to summit must improve without bottlenecks. It does not guarantee Everest will be accident free but if it avoids disasters like this year’s it will be worth something.

There will be many, particularly those who make a good living out of Everest, who will disagree with Doug. There is speculation that helicopters will be used to ferry climbers from Base Camp to Camp 1, thus avoiding the particularly dangerous Khumbu Icefall.  Helicopters are increasingly being used to fly equipment up to Base Camp, putting many a yak man or porter out of business. To fly higher seriously increases the risk of accident, as they will be flying right on the edge of capability. Air accidents already happen all too often in Nepal. Finally there is speculation that commercial organisations will erect permanent ladders up the Hillary Step making passage both up and down the obstacle that much easier. Everest is a World Heritage Site and should be protected from such vandalism. As it is, its status is abused with the amount of rubbish left on its slopes. How many other World Heritage Sites allow people to defecate all over them and leave it for others to see. There are some expeditions that take everything off the mountain when they leave. Why can’t all expeditions operate to the highest levels of expectation?

The legacy of this year’s disaster will be felt for many years to come. Left behind are thirty-one children without a father. The Himalayan Trusts of New Zealand and the UK, with the Australian Himalayan Foundation have committed to looking after the education of the sixteen children not already being cared for or beyond education. This is a financial commitment through to 2031, long after the events of this year are forgotten, or have been superseded by another senseless loss. Turning to last week’s on-going tragedy, it too is no surprise. October is supposed to be a perfect time to go trekking with blue and crystal clear skies, all dust from the Indian deserts having been washed away by the monsoon rains. The weather, presumably because of global warming, is not reliable; patterns are changing, abnormalities are increasingly becoming normalities. I was leading a group trekking in Mustang last October. Mustang is an area behind the Himalaya and therefore in the rain shadow. While we had good weather we were aware that it was not the same for everybody. A cyclone in the Bay of Bengal was having a similar effect on the Himalaya as this year’s cyclone. The Annapurna region was under heavy cloud and rain and we met trekkers who had not seen a mountain top until they reached Jomsom on the western side of the circuit. Last year the storm had more devastating effect in eastern Nepal, where nine feet of snow fell in one night!

Back in 1996 I was trekking up the Gokyo Valley when we came to Pangka, a camping ground with two or three huts. The previous November, after a significant snowfall, an avalanche swept down the hillside above the camp and buried it. Twenty-six Japanese trekkers and Nepali crew were killed. As we walked through the campsite, newly revealed now that the snow had melted, we came across flattened tents and an area strewn with personal kit, camp pots and pans. The force of the avalanche was visible as the roofs had been ripped off the huts and carried to a new resting place.

I have led twenty-nine trekking expeditions to the Himalaya. It is an incredibly spectacular part of the world and I consider myself very lucky to have been able to go there so many times. I went initially for the mountains but I return for the people. They are wonderful and those I have worked with are so thoughtful, willing and helpful. It is within the nature of Nepalese people to look after their guests come what may, and I am not surprised that so many perished or were injured doing just that.

It has to be remembered these are mountains, very big mountains, and the weather, just as  in Snowdonia, the Lake District or Scotland, can change with devastating effect.  I was in Ladakh in 2010 when a cloudburst triggered off landslides, one which swept through Leh, while others engulfed whole villages. Over 1200 people died that night.

On another occasion, while climbing Menthok Peak (6250m), we had heavy snow at high camp, forcing us to delay our nighttime departure for the summit. Delaying further, so that we could see the route ahead, my guide and I decided the conditions were not favourable, there was too much risk involved. I was responsible for the welfare of twenty-seven group members, most of them pupils from a school. Naturally, they were disappointed, but as we left high camp to go down, there was a loud crack and a cornice that had been overhanging the gully we would have been climbing up collapsed into it. We would all have perished and suddenly the decision was appreciated.

It is inevitable, that from time to time, trekkers will be caught out by bad weather but there are steps that can be taken to avoid it.

So many trekkers in Nepal arrive with no specific plan. They arrive in Kathmandu and decide they would like to do a trek. There are 1600 trekking agencies in Kathmandu alone. How do you know, when you sign up, that you are signing up to go with a reputable agency? You don’t. In a country that has no industry to speak of, that has no natural resources to speak of, that has an ineffective government, that has a level of corruption that we in the west find hard to believe, let alone understand, it is easy for people with little or no experience of the mountains to set up an agency. Regulation is ineffective and can always be bypassed with a bribe. And why not? Every year, with thousands of rich trekkers coming to their country, it is understandable that they want some of the pickings. As discerning westerners, we should be more careful about how we organize our treks. I always work with a UK based adventure travel company, Classic Journeys, who, in turn, work with a reputable Nepali trekking company, Karnali Excursions.  It may cost a little more but you can be sure that when decisions have to be made that concern the safety of the group they will be taken. We also guarantee that all trekkers are properly equipped, that the crew are properly equipped and that the porters, especially, have warm weather and wet weather clothing, that they have appropriate footwear and are suitably housed at night. This, all too commonly, is not always the case.

Many trekkers, particularly those traveling for many months where Nepal is only part of a much bigger picture, tend to minimize on kit. They are dressed inappropriately for the mountains, certainly mountains as high as these. They don’t have enough warm clothing, wet weather clothing, and often their footwear is inadequate. Nepalis might be able to trek in flip-flops but that does not mean we can, or should. There is no excuse for being caught out by last week’s bad weather. Mobile service is readily available throughout most of Nepal and it is possible to get weather warnings in advance and act appropriately. Reputable trekking agencies send their guides out with satellite phones so that contact with the outside world is guaranteed. Those who work and live in the mountains would have seen it coming simply by looking at the sky, reading cloud formation, the light on the mountains and the direction of the wind.

Out of all of the events of the last week, I feel greatest sorrow for the porters who lost their lives, and the families they leave behind. They had no choice in the matter. If they did not do as they were told, they would not have been paid.  There is no insurance cover for them and no welfare state for families to fall back on. It is sad that trekkers lost their lives or were injured; they have a voice and can make their own decisions. So too the guides to a certain extent, although they are likely to have felt under pressure. Porters have few rights in the unequal world of Nepal. Now their families are bereft of their breadwinners, children of their fathers, wives of their husbands. Who is going to look after them now?