As I drew the curtains this morning I was greeted with cloudless skies and the sun still below the horizon, a deep glow gradually brightening in the east. It was a good day for a walk and recce of the route for a group walk taking place in a few days. 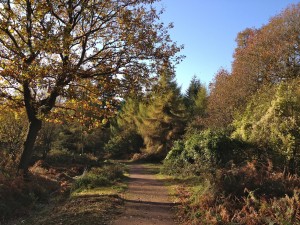 Rucksack packed, I was off by 8.00am heading for the Forest of Dean where I was looking forward to a display of autumn colours enhanced by the blues skies and bright sunshine above.  By the time I arrived at the Forestry Commission car park above Symonds Yat East it was still early for all those enjoying a half term break in the Forest of Dean, as the car park was deserted. Booted up, I headed south from the car park until I picked up the Wysis Way, a trail that links the Wye with the Thames. While most of the tracks through the forest were good, the Wysis Way does not necessarily follow them, but breaks from the main trails on narrow tracks that pick their way through the majestic mixed deciduous trees. Above the canopy, planes deposited their vapour trails, which expanded with time,  as they headed west across the atlantic to unknown destinations.

Many of the trees were still surprisingly green, despite the fact that I was walking on a carpet of copper brown leaves. The canopy, the part of trees exposed to sunlight were beginning to turn various shades of yellow and orange, while the leaves below the canopy and therefore protected were still green. 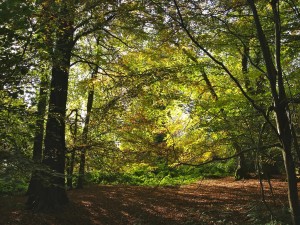 As I walked I began to think that this was not too unlike trekking through the jungles of the Chitwan in Nepal. There were trees and leaf debris on the ground. What it lacked was elephants, rhino, black bears, tigers, leopards and wild boar. Apart from the lack of wild life it was very similar. Suddenly there was a rustling of leaves, the snapping of twigs. As I looked down the slope, through the trees, I spotted three stags running. It was only a fleeting glimpse but enough to excite and get the heart beating a little faster. More rustling above me drew my attention, and a dog, I’m not sure what breed it was but it was the size of a dalmatian, came running out of the trees in front of me. Seeing me it hesitated, eyed me up, and decided that it would be more fun chasing stags that me. It had an extremely thick collar on it, as if its neck might be vulnerable. In the distance an owner was shouting, either calling for it or sending out instructions. I could not make up my mind whether this was a rogue dog doing what it should not, or a working dog following instructions.

The most beautiful patches of wood were those where beech trees were more prevalent than any other species. Here the ground cover was really a good copper colour, the leaves on the trees were more spectacular and underfoot the husks of beech nuts crunched under my feet. Occasionally squirrels skitted around on the branches among the thinning foliage, still making the most of the autumn harvest of nuts. 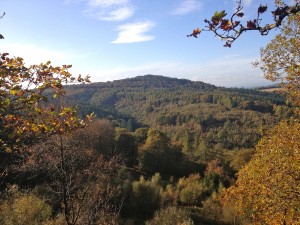 The view from Near Hearkening Rock

Eventually, having navigated myself through the forest without too much difficulty but with regular reference to the map, I reached Near Harkening Rock, an outcrop of rocks with panoramic views of tree covered hillsides  beyond. It was an ideal spot to stop for coffee, enjoying the view and the warmth of the sun. Had it been raining it was still a good place for coffee as the cliffs were overhanging and it was only a short distance to seek their shelter.

Descending from the rocks I reached a wide forest track. All that accompanied me were the sounds of birds, rarely seen but clearly heard. Shrill robins hopped around in shrubs and on lower branches while buzzards mewed as they circled high above the canopy. Suddenly another sound drifted through the trees, that of excited children, getting louder as we got closer. The birds were quiet, shocked into silence by the children, four of them on a half term stroll with their mother. As they drifted into the distance exploring minutely  everything they came across, another sound drifted through the trees, that of traffic on the A4136. The trees, rather than muffling the sound, seemed to amplify it and it was a long time before I could see any traffic, a lot of it heavy aggregate lorries. Having crossed the road there was just a little more woodland before the descent into Monmouth. 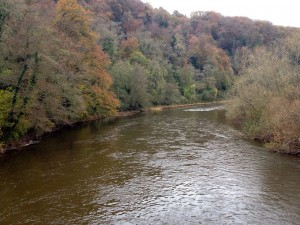 Having crossed the Wye via the main bridge I then dropped down to the riverside path on the Monmouth side of the river. I was now walking parallel to the busy A40, which shattered the peacefulness of the river bank. It is a good path and therefore I was able to cover some distance quite quickly. It is 5.5km from Monmouth Bridge to Biblins and had I not stopped for lunch and a mooch around the delightful St Peter’s Church, it would probably have only taken me an hour to cover the distance. But why rush? Despite a build-up of cloud, it was still a very pleasant day and there was plenty of bird life on the river to distract me from forward progress. Every-so-often fishermen sat at the water’s edge whiling away a few lazy hours. The lack of keep nets draped into the water suggested that they were not having very much luck. The river had lost the clarity that we associate with it in summer and had the appearance of thin gravy . It was moving quite quickly and occasionally there was the hint a rapids but nothing of significance. As I neared Biblins Bridge there were a few Canadian canoes with young families enjoying the river experience. 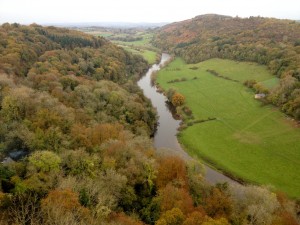 A much photographed view of the Wye from the viewpoint

Having crossed Biblins Bridge the riverside path became significantly busier with casual walkers reaching this far from Symonds Yat, taking one of the many walks available from there. Just before the riverside village, about the spot where there are some more active rapids, I took the steadily climbing path up to the cafe and car park. Here it was really quite busy so, following a visit to the viewpoint and a cup of tea, I headed home having had a very enjoyable walk.