There are mornings when you draw the curtains back to reveal a foggy world outside. Instincts tell you not to venture out but it is the opposite you should do.

A number of the students and staff involved in the ‘Share the Vision’ Iceland group met at NCW and drove through the fog to the Carding Mill Valley at Church Stretton. By the time we arrived the fog had cleared to reveal clear blue skies and warm sunshine. Yet, below us the lower lying areas were still shrouded in fog. 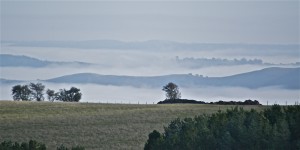 Ridges rising above the cloud

Climbing steeply we climbed up one of the narrow valleys, fanning out from the main valley, and reached the summit in good time. Despite the fact that some of the students were visually impaired, it did not slow them down very much on the easy paths which crisscross their way over the Long Mynd. Below, temperature inversion meant that the fog lingered while we basked in glorious sunshine. Away in the distance, the summit of the Wrekin seemed to hover above the earth as it rose above the clouds. Elsewhere tree-lined ridges poked their heads out and enjoyed the sunshine. It was a glorious day. 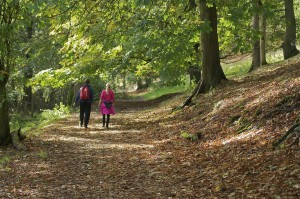 Dappled light through the trees

Following sections of the Shropshire and Jack Mytton Ways we traversed the northern reaches of the Long Mynd to descend via Golden Valley and the Darnford Brook, through some beautiful stretches of mixed woodland, to Bridges, where, had we not had a group of young people to look after, we would have spent a happy half hour. As it was we began the gentle climb back up to the summit plateau in order to return to the Carding Mill Valley.

Today was one of those days when first impressions are not necessarily the best, when natural instincts are to be ignored and where you should make the most of every opportunity that comes along.