Slept well on the beach but woke to a thundering sea as high tide brought the water’s edge only metres from the tents. A number of dogs joined camp, following the potential food trail from the kitchen tent. During the night there was some barking commotion, which lasted for a few minutes. In the morning there was a dead fox behind the mess tent, the cause of the barking and a victim of pack mentality. The strange thing was that the fox appeared unmarked. There was a slightly eerie atmosphere on the beach as there was a light mist coming off the sea. The waves were even larger this morning and much better formed as the wind had died. 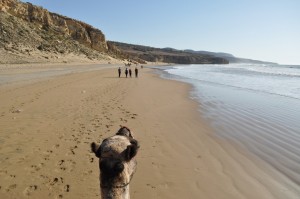 After breakfast we retraced our steps along the beach and up the steep track into the Argon Forest. Angela was riding a camel this time and soon found herself and Caz trailing behind the rest of the group. Caz’s camel did not like mornings! They eventually caught up, having had a spell of trotting, once they had reached more level ground.
The Argon Forest was much thinner now, not that it was ever dense, and the landscape took on a more general agricultural appearance. Towards the end of the trek we descended towards the sea to pick up a sand dune (the only one we encountered). Soon lunch was reached, which heralded the end of our camel trek. We said farewell to our camel crew and then the two cooks, Jamie Oliver and Gordon Ramsey, before we piled into the minibuses again for the 45 minute journey to Essaouira and the Hotel Myramar.
We all had a welcome shower. 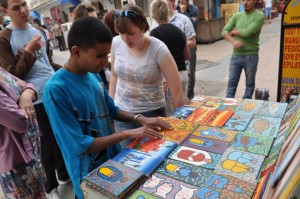 A number of the group wished to go shopping while others preferred to stay in the hotel and use the pool. I took charge of Krishan and guided him to the bazaar in the old part of town. He was very particular about what he wanted to buy and took quite some time making up his mind. It would have been nice to have sat in one of the street cafes for a drink and a chance to people watch but that was proving impractical. It was also Krishan’s time so I decided not to even consider doing any shopping for myself. 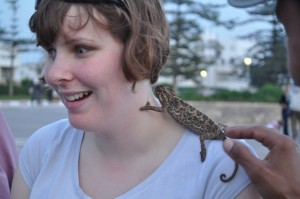 Joining up with Angela and Russ, Kate and Richard Wheatley for the return to the hotel, we decided to walk along the sea front. On the promenade I felt something in my back and Russ quickly pointed his camera at me, not wishing to miss a photo opportunity. The something on my back was then placed on my head. It was a chameleon. Krishan, Kate and Richard were given it to hold and they were really enjoying the experience. Its owner also had a tray of home made biscuits and small cakes. He kept trying to put one in Krishan’s mouth but we had to stop him because of his nut allergy. In order to show our appreciation of the chameleon opportunity Russ and I decided to buy some. We were choosing a selection when the vendor told us that a chocolaty looking one contained hash. We chose to avoid that one. While we were buying an Englishman, walking past, stopped to alert us to the fact that the biscuits and cakes contained hash. I said I knew and that it was all right. He then commented that he wouldn’t feed them to his children. Unfortunately I did not have a quick and ready answer but shortly afterwards I realised I should have said, ‘Oh, it’s all right, this is a school trip.’ The best lines always come too late.
Returning to the hotel, we discovered that the tiling around the pool was quite slippery; Sam having taken a tumble and bruised his hip and Tom, not having learnt from Sam’s experience, did the same and hurt his arm!
In the evening we ventured across the road to a pizza restaurant for our evening meal. Chicken tagine and a beer – lovely!
Having settled for the night, Tom came to our room complaining about his arm. I suggested he take a couple of paracetamol and I’d deal with it in the morning.