Put a sling on Tom’s arm and gave him a pink pill. I don’t think there is any serious damage, just bruising, and he is susceptible to knocking it. A sling should remind him to take care and act as a warning to others. I don’t think he would relish spending his last morning in a Moroccan hospital. I certainly wouldn’t. 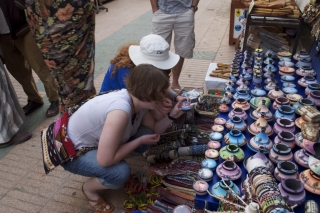 Most of the group wanted to go shopping, whether they had gone the previous evening or not. This time I did not have any responsibility, other than being there if anybody needed me, so I was able to photograph and buy some CDs which might provide the soundtrack for the film. Returning to the hotel we ventured across the road to the same pizza restaurant for an early lunch, after which the minibuses took us back to Marrakech, a journey of about 2½ hours.

We decided not to run the risk of allowing the students out into the souk and beyond to Jeema El Fna. Too risky with bicycles and motor bikes mixing with pedestrians in the narrow alleyways. It was a shame that we decided not to allow the KSW students to venture out but we did not want to discriminate. However, that did not stop Angela, myself, Caz and Alistair and Tracy going out. The hotel was remarkably close to the square and it was just beginning to liven up for the evening as we sat on a restaurant terrace sipping coke. Later we ate in the hotel – not the best meal but very convenient. I would stay in the hotel again for its location but I would eat out every time.