The next morning, after a good night’s rest, we felt refreshed even if our calf muscles were a little stiff at first.

As soon as we were ready we began the 400km journey south to Martinborough in the heart of the Wairarapa wine region. Here, we were meeting the girls and having a couple of days in a house on the outskirts of the town. While here we hoped to sample some of the local wines.

The house was superb with a large decking area leading to a large lawned garden with apple, orange, lemon, lime and olive trees. 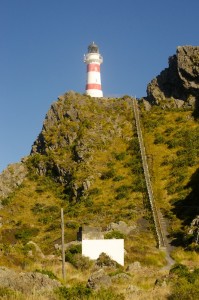 The weather continued to look good so we took advantage of it and driver out to Cape Palliser, the southern most point of North Island. The rugged coastline, a mixture of small bays and rocky outcrops is home to colonies of seals, which we saw basking on the rocks or some who had ventured further inland and were sleeping on a much softer bed of grass. Protecting shipping from the rocky coastline is a lighthouse, accessed by 252 steep steps. The view to either side is excellent and to the south, just across Cook Straight, is South Island.

Just to the west of the cape is the small fishing village of Ngawi, perched on the narrow strip between the sea and hills. When the southerly wind blows Ngawi must feel the full force of it. On the shingle beach a variety of fishing boats sit in tyre protected trailers attached to bulldozers of every size, shape and colour. I guess the caterpillar tracks of the bulldozers gain a better purchase on the shingle beach than a traditional tractor. 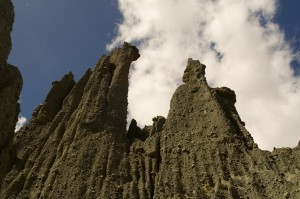 Retracing our route we turned off and up a gravel road to a car park from which led a track following a relatively dry river bed. This led to the Patangirua Pinnacles, a dramatic geological feature, which was another landmark used in the Lord of the Rings trilogy. The pinnacles are made of a soft, easily eroded, material but have boulders implanted into them. When the pillars are capped by a harder rock the soft material directly underneath is protected while that outside the protective cap continues to erode. 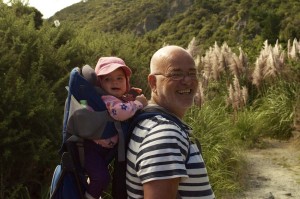 To make the walk up more interesting I had Eva in a backpack. It was fun to have her on my back but I knew she was there when the gradient increased. The down side of carrying Eva was that I really had to focus on where I put my feet so that I didn’t stumble with my precious cargo. While focusing on that I couldn’t look at and appreciate the pinnacles. Ben took responsibility for the return journey, which enabled me to relax and enjoy the magnificence of the pinnacles.

Before we left Martinborough we had to sample the wine. We decided to lunch at Tirohana vineyard and sample some wine at the same time. Following the meal we visited another, smaller boutique vineyard, Haythornthwaite. Mark Haythornthwaite bought 11 acres of land in 1991 and established it as a vineyard over the intervening years. Today, he produces between 18,000 and 20,000 bottles a year. As I was going to be driving on to Waikane on the Kapiti coast when we left I limited my tasting to the smallest of sips. It was sufficient to tell me that what I was drinking was good.