Less than 24 hours after completing the four day trip, I was back on the river with a group of ladies who had never paddled before. I was either very brave or very stupid. I will let you know what I think I was at the end of this blog. 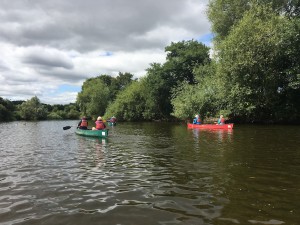 This all came about as a result of people seeing the pictures from last year’s trip and thinking, “We would like a go at this.” When they suggested it I leapt at the chance and could not wait to take them through the rapids at Symonds Yat. Eventually common sense prevailed and I decided that that was not the best introduction for novices, so chose to paddle from Ross-on-Wye to Symonds Yat West, stopping just short of the rapids. It gave a total distance of 14 miles with a lunch break at the Inn on the Wye at Kerne Bridge after just 6 miles.

Now these were all ladies who like the finer things in life, leisurely breakfasts, coffee mid morning, routine and a degree of comfort. When I greeted them they wanted to know where the bacon butties were and when were they going to break for coffee. I’m afraid there were no bacon butties and coffee was just one of yesterday’s memories. This was not going to be a cruise. You, ladies, are the engine room. 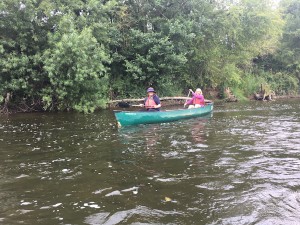 Kitted out, we were taken to Ross where we were briefed on the basics. While it was useful for them to hear this from our provider, Mark, I told him that as soon as we were on the water I would get them to raft up and I would demonstrate those basics so that they could see just how easy it is to turn and control a Canadian canoe. Once on the water I realised that getting them to raft up was going to be impossible, so, hoping they could all see me from where they drifted, I went through the basics. I think one or two may have found it difficult to concentrate as they were beginning to feel coffee deprived.

Instruction over, I decided that the only way they were going to learn was to learn as they travelled down the river. Immediately after passing under Wilton Bridge we came across our first section of slightly agitated water with shallows either side of a relatively narrow channel. Following my lead, they all managed to get through unscathed. If they tackled all such areas with as much ease as this, it was going to be a good day. 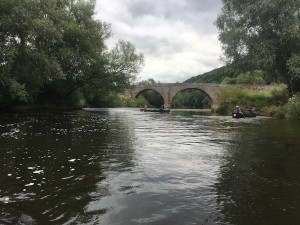 However, it was not the areas of agitated water that was causing the problems in the early part of the trip. It was steering the canoe in a relatively straight line. There were issues with decision making as to which side they should paddle in order to correct the line. Get it wrong and they soon reached the stage where there was not enough time for correction. One such crew, who will remain nameless, but included a farmer and a person who has a declared interest in all things botanical, felt the need to take closer looks at many of the willow trees that line the banks of this beautiful river. There were occasions when the botanist had to lie down, the canoe went so deep into the trees. In all fairness, if you have never steered a canoe before, it is a difficult concept to comprehend and often goes against natural instinct. 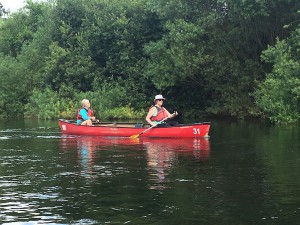 On the whole the group was performing well and we arrived at our lunch destination half an hour ahead of schedule. Wanting to make sure the ladies went to lunch dry, I stepped out of my boat into the water in order to hold their boats firm while they climbed out on to the bank. Little did I realise how deep the water was and I found myself almost up to my waist! At least they all remained dry. Carrying the canoes up to flat ground, out of harms way, proved a a bit of a challenge, but the ladies were relieved that a charming, handsome young man in wellies came to their aid. 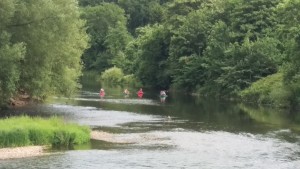 How about that for accomplished paddling? (Photo – David Thomas)

We were joined for lunch by several friends who, a little like the women who sat on the front row at a guillotine, wanted to see mayhem as we passed under Kerne Bridge. Unfortunately, their coffee session overran and they missed us glide gracefully between the stone arches. Instead, they had to satisfy their thirst for a dunking by watching as we embarked on the next stage of our trip. Thankfully for us and sadly for them the ladies pulled away from the bank like professionals. Two members of the baying crowd did go a little further downstream and catch a grounding, which necessitated some drastic action to get the canoe afloat again. In the context of the whole trip, it was a minor error of judgement. 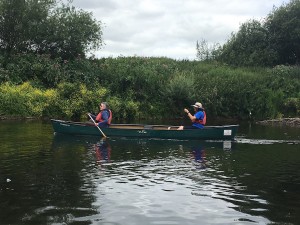 The scenery improved as we paddled nearer to Symonds Yat;  soaring hills of woodland with rocky outcrops hosting peregrine falcons. Kingfishers darted among the branches on the banks of the river. By now, under the watchful eyes of tourists at the lookout post on Symonds Yat, the three crews were managing to steer a straight course down the middle of the river. It was only, a little further along the journey, that we hit a strengthening headwind which complicated the steering process. I noticed it particularly, being the sole occupant of my canoe, and therefore did not have the ballast at the front. Angela, who should have been with us, and would have been my ballast, had been forced to retire before she got started. I’m not sure she will like being referred to as ballast. The outcome of it was, that with my prow out of the water, if I was not facing straight into the wind, it would turn me round. Fortunately, it was not long before the river took another turn and the wind was behind us, pushing us gently towards our landing at the Olde Ferrie Inn at Symonds Yat West where we were met by our land crew. 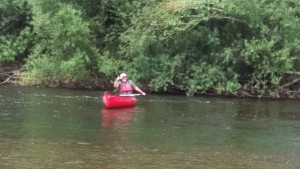 Was I brave or stupid? Neither. I was proud of my ladies. They had embarked on an activity they had never done before, learnt quickly, worked their way through the coffee deprivation period to come out the other side as competent paddlers. Would I take them again? Most certainly, and next time we WILL try the rapids just below Symonds Yat.

2 thoughts on “Ladies Day on the Wye”