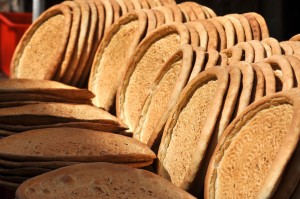 Waking refreshed and headache free, I took myself down to the restaurant for breakfast.  There was hardly anything that I would call breakfast fare and as all the labels were in Chinese, no idea what most of it was.  What I had was quite tasty but also quite strange.

The hotel is comfortable and clean but has some features, which cause amusement and intrigue.  In the bathroom of each room there is a basket by the wash bowl, which contains a variety of products.  I don’t think I have stayed in a hotel before where such products are so readily available – condoms, arousal oils and creams for ‘him’ and ‘her’ with very clear instructions as to which part of the anatomy they should be applied and for how long, and cream to prevent premature ejaculation.  Nothing was left to the imagination.  Needless to say, it all remained unused!

In the room’s information pack there was a price list for every item of furniture and every fitting and every item not fitted, including condoms, so that if you liked anything sufficiently, you could pick it up and take it with you, providing you settled up with reception first.  I did not see anybody leave the hotel with their mattress under their arm, 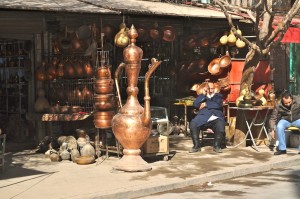 Today we explored Kashgar, a bustling, vibrant city of 4.5 million.  As we walked about the streets we took our lives into our hands.  Nearly everybody has an electric scooter, which is fantastic for keeping the city’s noise levels down but also means we do not hear them as  they aim straight for us from behind.  It is necessary to have your wits about you at all times, even if you think you are safe on the pavement – scooters can and do go everywhere. 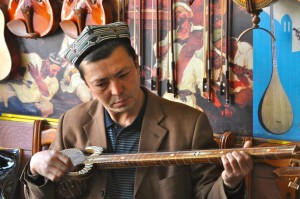 We focused our attention on the older and more interesting Uygar area of city, calling first at Cotton Traders Road.  This road might have been known for cotton trading in the past but now it holds a variety of handicraft shops, which seem to bunch together according to craft skills.  The first group we came across were copper and tin workers who create vessels of every size and shape and then hammer them to give them texture.  There were jewellery shops, bread shops, carpet shops, hat shops (I bought another, a Uygar hat), wooden crafts and musical instruments.  The latter was particularly interesting as we were given a recital while we were there. 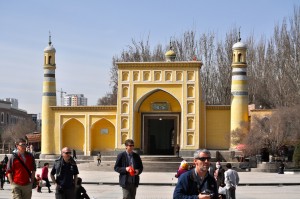 Around the corner we visited the yellow tiled Idkah Mosque before going on to the old town built on a hill of dried mud.  The majority of the houses were made of wattle and daub, although some are being replaced using more modern materials.  We were led to believe that this would be very interesting and photogenic but, in fact, it was disappointing.  It was a series of alleys with little colour and not a lot going on.

For lunch we went to a very elaborately decorated restaurant, although we were given a plainer room to ourselves.  We sat around a huge round table with a turntable in the middle.  We understood we were having a light lunch but the food just kept coming! 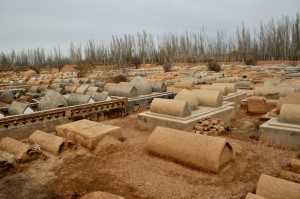 The cemetery by the Aba Khoja Mausoleum

After lunch we travelled a little further afield, using a bus which picked us up from the restaurant.  We went to a jade and carpet centre where there was a workshop for each craft.  Nobody really wanted to go there and it proved a little embarrassing as everything was incredibly expensive.  I guess Akbar, our guide, could not miss out on the chance of a bit of commission.  We did not stay long.  Much more interesting was the Aba Khoja Mausoleum, the final resting place of the Fragrant Concubine, Xiangfei.  There were casks from five generations in the mausoleum, which, with their colourful silk drapes, would have made an interesting picture had photos been allowed.  The cemetery next door for more ordinary mortals was impressive. 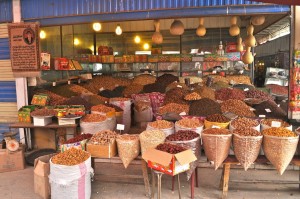 Finally we went to the Sunday Market (open every day but called as it is because that is the main market day) where there was an array of things on sale from shoes to materials, from nuts to stockings, from electrical goods to toys.  I was hijacked from my wanderings to speak to a young man running a pashmina and scarf stall.  He did not want to sell me anything but just wanted to improve his English.  A couple of his mates joined us, who did not speak English, and the questions flowed.  It was an enjoyable way of spending 20 minutes.  Continuing my wanderings I came across a chap who was determined to sell me some binoculars.  I showed him mine but he was not deterred.  He was very persistent, showing me some Japanese and then Russian binoculars.  The price kept dropping to ridiculous levels.  Eventually I just walked away. 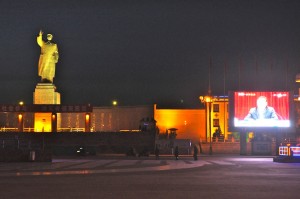 In the evening we went to a restaurant which, unfortunately, was not very good.  The food was not very warm, and to make matters worse we could not make the bill fit.  It turned out that they had added Akbar’s meal on to our bill despite telling him his was free.  We also discovered that, because we were in a room on our own, they had also charged us for the use of the room, by the hour.  We won’t be going back there again. 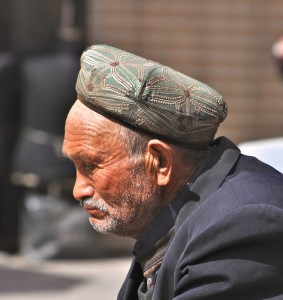 One thing that struck me today was the ethnicity of the people.  The Uygars are not at all Chinese but are very closely linked to Turks from the days of the Ottoman Empire.  The Chinese are all settlers from the east who have come to inhabit the area relatively recently. The Uygar men tend to be very traditional in their dress, particularly the older generation, while the women seem to love big hair and high heeled boots.  Traditionally the women partially cover their big hair with some form of head scarf.

Observing the comings and goings through the hotel reception as we returned from our evening out, I have come to the conclusion that the hotel is a rather expensive knocking shop for businessmen.  There is a night club on the fifth floor where businessmen pick up young girls, take them to their rooms and make use of the facilities and products on offer, so long as, according to the rules, visitors are gone by 1.00am.