I woke refreshed.  Unfortunately the sky was not so clear this morning and the mountains could only just be seen.

We left Bishkek at 8.30 and started our journey towards the Chinese border.  The road followed the Ushi River, which forms the border between Kyrgyzstan and Kazakstan.  A razor wire fence and lookout towers decorate the other side of the river.  Bizarrely the road briefly crosses the river into Kazakstan for about a quarter of a mile before it crosses back. 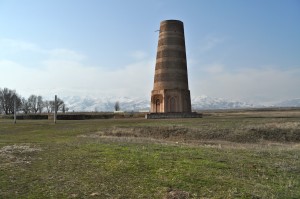 En route, we visited historically interesting Burana Tower, an open museum in the site of an ancient Kyrgyz settlement with a fort and mosque.  There is nothing left of the fort other than the mound on which it was built and the minaret has been rebuilt, now looking more like the leaning tower of Pisa rather than a minaret.  There was an incredibly narrow, steep spiral staircase to the top giving expansive views over the surrounding countryside.  Back at ground level there was a yert, which acted as a shop, where I bought a typical Kyrgyz hat as worn by men.  The fact that it only cost £3.50 was a bonus.

Continuing our journey, we stopped in the village of Kochkor for lunch, not in a restaurant but in a home stay.  The house was immaculate inside and, remarkably, all of us were able to sit around one table heaving with food, not the meal but the accompaniments to the meal.  The first course was a plate of salad with a fennel dressing.  This was followed by noodle soup with potato and pieces of tender lamb.  Thinking that was it, you can imagine our surprise to receive a plate of beef, rice, buckwheat and vegetables.  Not surprisingly everyone fell asleep in the buses in the afternoon. 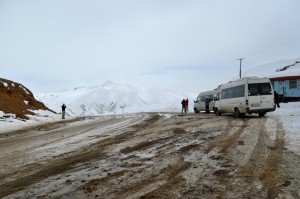 The bleak and cold Dolon Pass

The post lunch journey saw us climbing further until we reached to top of the 3030m Dolon Pass.  Deep snow lay all around us.  From the pass it was downhill to Naryn, a former Russian military town which now seems to have little going for it.  Until the Russians left it was a ‘no go’ area as it had military significance and things were happening here that they did not want the rest of the world to see or know about. 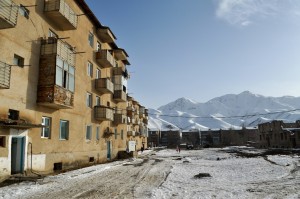 Having settled into our guest house, we took a stroll around the town, which only confirmed that it is not a pretty place, even with lots of snow.  Like the lunch we had had earlier in the day, the dinner was excellent and the vodka also went down very well.

The next day was a day of snow and check points.  We left Naryn at 7.30 and climbed out of the valley to an aptly named Red Pass.  This led on to a wide, high plateau with a mountain chain on either side.  Here the snow was deep in places, piled high on either side of the road.  It was cold and bleak, and anybody who lives up here really does live through a long, harsh winter.  Summer probably only lasts three months. 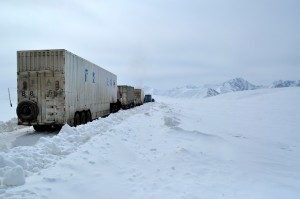 Blocked road leading up to the Tourogat Pass

At about 10.00 we came to our first checkpoint.  We could stay in the vehicles but Maria, our Krygyz guide, had to take our passports to be scrutinised.  This done, we continued towards the border. We soon came across a stationary convoy of lorries blocking our way.  The front bus, driven by Vladimir, known as ‘Vlad the Impailer’, took the cavalier approach and decided he could drive past this convoy where there was clearly not enough room.  Sure enough, the front of the bus plunged off the road and into deep snow, leaving it leaning precariously to one side.  Thankfully our driver, Mikael, did not attempt to follow. 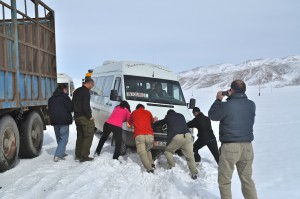 Releasing Vlad's bus from the snow

In his cavalier haste, Vlad managed to dig the bus deeper into the snow.  Our bus positioned itself to attach a tow strap but it did not have the power for the job.  With thirteen English, Vlad, Mikael, Maria and an assortment of Kyrgyzstani and Chinese lorry drivers all chipping in with ideas we did not get very far, particularly as everything the English suggested was ignored.  The line was now attached to the front of a lorry but with the front wheels firmly entrenched it was not long before the line snapped.  The simple solution was to dig out the snow behind the front wheels but it was hard to get the message across and nobody understood what we meant.  The now shortened line snapped again, as did the steel wire used next.  Eventually we found a shovel and cleared the snow.  The combined strap and steel wire then did the job and the bus was pulled free and back on to the road.

Before we went any further snow chains were fitted to our vehicles while the lorries obligingly moved over enough to give us room to pass.

Our next stop was at the Kyrgyzstan border post where we had to leave our vehicles and go into a fridge of a building.  The marble floor had a layer of ice on top, making it lethal.  We queued up to have our exit stamps, which took a while, and by the time that was done we all needed the loo.  Unfortunately the loo was on the Kyrgyzstan side and we were now on the Chinese side and could not go back.  At the first opportunity we created some yellow snow patterns at the side of the road!

We had now entered ‘no man’s land’ and it should only have taken us twenty minutes to reach the Chinese border but delays behind stationary lorries, or one in particularly who decided to move off just as we approached and slewed across the road, blocking it entirely for at least fifteen minutes while the driver, realising he was going nowhere, put chains on.  We need not have worried because by the time we reached the border there was no sign of our Chinese crew.  There were problems on the other side of the Tourogat Pass.  The snow on the top of the pass was several feet deep and despite the sunshine there was a cold breeze.  After, maybe, half an hour or so, word came that our Chinese takeover crew had arrived.  Everybody leapt out of the buses, got their kit bags out, put them down and headed for the border guard who wanted to see their passports.  When they reralised that they were in China and their bags were in ‘no man’s land’ it was too late, they couldn’t go back.  Those of us who were left ferried the bags to the border where they were loaded on to a pick-up truck before we finally crossed the border.

Our bus was not able to reach us, being stuck behind lorries, so we set off to walk down the road to meet it.  The scenery was stunning with white mountains as far as the eye could see.  It was good to stretch our legs, unfortunately it did not last for long as our bus had crept closer than we expected.

All aboard, the bus turned round and took us down the hill, past a lorry who’s trailer had toppled off the road into a ditch on a hairpin bend, which had caused many of the problems on the Chinese side of the pass.  We soon pulled in to a check point where our passports were scrutinised yet again.  At least officials, like all those we encountered during the day, were pleasant and smiled.  We discovered that we were the first tourists this year to cross into China via the Tourogat Pass, so, I guess, they were quite pleased to see us as we broke the monotony of lorry driver after lorry driver.  The scenery on the Chinese side of the pass suddenly became more spectacular.  The other side was beautiful but it had a bleakness about it and lacked the ‘wow’ factor.  This side had everything, vertical faces, pointed peaks, snow fields, the lot.

100km inside China we came to the custom post where we had to have our entry stamped and our bags checked.  This was the bit I was worried about because of all the cash we were carrying but I should not have bothered.  As we lined up we had our temperatures taken and they also wanted to give Katrina and Mo a polio vaccination!  Anybody entering China who was born after 1978 has to have it.  They refused so had to sign a disclaimer.

The only thing that concerned customs was food.  They confiscated the remains of our packed lunches and seemed convinced we had sausages!  Sigg bottles look like large sausages on the x-ray machine.  Satisfied, they let us go, but not before checking that our passports had been correctly stamped, before they let the bus out of the compound.

An hour later we were in Kashgar.  We had been on the road, stuck in snow or having our passports checked for thirteen hours. 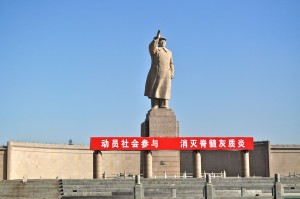 We stayed in the Tianyuan International Hotel.  We were not supposed to be here but the hotel where we should have been had plumbing problems.  This is a 4* hotel and, reportedly, one of the best in Kashgar.  It is right in the centre of town, adjacent to the Peoples’ Square, lit up lavishly at night and overlooked by a giant statue of Mao.

Having a headache from the travelling, I skipped dinner and retired to bed early.  It was good to briefly see Hira, Bishnu and Tendi before I disappeared.