This morning there were some gun shots near the hotel but we did not find out what had happened.  The fact that a SWAT team was permanently camped in the lobby of the hotel with good views of the square did not really alarm us but raised our curiosity.  Every so often they would go out into the square, armed to the teeth with shields, bullet proof vests, batons and automatic weapons to put the fear of God into the indigenous population.  It was noticeable that all the SWAT team were Chinese.

After a leisurely breakfast we vacated our rooms and boarded our land cruisers for the journey to Kargilik (YeCheng).  It gave us an opportunity to see the extent of growth and development of Kashgar, with massive housing projects on a scale unprecedented in the UK.  The speed and scale of development is phenomenal. 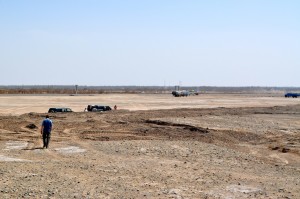 The landscape throughout the journey was flat.  I doubt there was a fluctuation in height more than 10m all day.  To begin with, once we had left the urbanisation of the city, we passed farmland of small fields.  The road was brilliant, brand new and in places cut right through the middle of these farming communities, not providing them with anything but destroying their community and environment.  Where there wasn’t farmland, there was a barren, stony, infertile wasteland, the Taklamaken Desert, the second largest desert in the world.  Gradually white, snowcapped peaks  came into view on our right, although we did not venture much towards them but ran parallel with them.  The further we went the more barren the landscape became.  We stopped at a ‘services’.  I use the term loosely as it was nothing more than a flattened area of desert awaiting development.  Soon, a railway ran parallel to the motorway linking Kashgar to the cities 5000km on the other side of China.  These new transport communications help speed up the colonisation of the west by people from the east, given financial incentives from the government. It is so easy for the Chinese to move huge numbers to the west and swamp the indigenous muslim population.  It is hardly surprising that the Uygars are unhappy and feel the need to make their feelings known from time to time.  Hence the need for the Chinese to make their presence felt with SWAT teams and over zealous police surveillance. I think the Chinese philosophy of ‘progress at any cost’ was summed up when the motorway we were travelling on,  scythed through the middle of a cemetery with no regard for the feelings such action might produce. 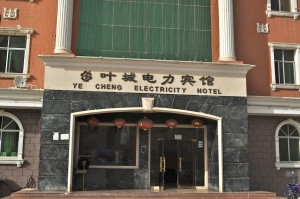 On reaching Yecheng, our vehicle took us to the strangely named Electricity Hotel.  Having disembarked our driver received a call to say we had to go to the police post to have our passports registered.   This took quite a while as our names were carefully written into a register.  Job done, we returned to the Electricity Hotel, got out of the vehicles and planned settling in when Akbar told us we were staying in another hotel.  Returning to the vehicles, we drove the other hotel, a cavernous, empty place which we discovered had no water.  Akbar decided we could not stay there so we returned to the Electricity Hotel and settled in.  It is not very clean.  The walls have damp and peeling wallpaper and there is a musty smell about the place.  One room had dried vomit down the wall adjacent to the bed.  Most people rearranged the furniture to avoid coming into contact with anything unsavoury and, just in case the beds were infested, many of us used our sleeping bags.  Part of the problem was that the tourist season has not really started yet, so most hotels are not open and those that are have a certain aroma of being shut up for several months. It is a shame that they have not learnt to do maintenance work during the off-season.

Having settled in as best we could we decided to go for a walk and explore the town, which was much bigger that I imagined.  I thought it was going to be a bit of a one-horse town but it has a population of several hundred thousand – not bad for a city built out of nothing in the desert.  We noticed a lot of soldiers and police on the street corners as we drove around and were warned not to go too far from the hotel as a couple of weeks previously there had been a bomb, hence the military presence.  It was not unpleasant walking around, although it was as though the circus had come to town and we were it!  We were the only white faces in town and we appealed to the children coming out of school.  We also appealed to a member of the Chinese Secret Police whom we spotted following us.  He was wearing a brown leather jacket and kept speaking into his lapel. There were five in our little group and when we got together with others we discovered that they too had been followed and in each case the followers were wearing brown leather jackets.  Hardly very secret!

In the evening we went to a restaurant for another banquet!  Realising we were not getting enough exercise we played on an exercise park, putting off the inevitable return to the Electricity Hotel for as long as we could.

Looking south from the top of the first pass

We left Yecheng after breakfast and drove south across the desert, eventually reaching the foothills.  From now on we steadily climbed up a series of hairpin bends to the 3150m summit of a mountain pass.  The view over the other side was superb and extensive.  A huge wall of snowcapped mountains on the horizon with orange and red mountains in the foreground.  From the pass the road, still a very good one, dropped dramatically to the valley floor below to follow the Kudi River.  We stopped for lunch in a village, which preceded a lengthy stop at a checkpoint.  All the time there were lorries thundering up and down the road, those going up empty and those down full of iron ore.

Having passed through the checkpoint we began to climb for the second time.  We stopped to view the line of the original silk road half way up a cliff face.  It was hard to believe that anybody would consider travelling on such a route.  One of the vehicles failed to join us at this stop as it had had a puncture.  This delayed us a little.  Simon went on walkabout and when we left we were all convinced that he was somewhere ahead of us on the road.  In fact he was behind us.  Unfortunately, one of the other vehicles picked him up and he was soon repatriated with us.  We tried to lose him and give ourselves more room, but failed. 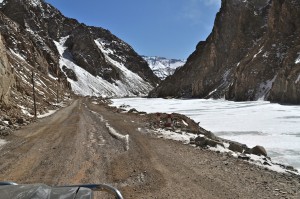 The road 'work in progress' running alongside the frozen river

Soon the good road turned into a ‘work in progress’, which slowed us slightly.  One of the other vehicles kept having power problems and overheating so our progress became very stop/start for the remainder of the journey.  We eventually reached the top of the next pass at about 4900m but it was far less impressive so we did not bother to stop.  The scenery close to the road was much more interesting with the frozen river running alongside the us. 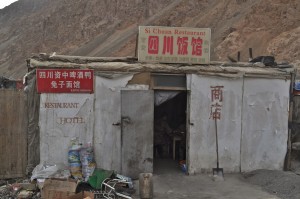 Eventually we reached the village of Mazar, which is nothing more than a junction in the road and a few shoddily built shacks. If you turned left you followed the iron ore trucks, or right you followed the Yarkand River to Yilik where there was another checkpoint.  Having successfully passed through the checkpoint we travelled a few more kilometres to the village of Yilik and our first camp.  It had been a fantastic, if not rather long journey and because our arrival was quite late some of the group were able to sleep in a village house, while the rest of us pitched tents nearby.  It was a beautiful, if chilly, starlit night.