With news reports of man eating tigers in the Gunung Leuser National Park, the closure of Heathrow and hundreds of prisoners escaping from Medan jail we travelled along the M4 not knowing whether we were going to get away or not, nor what might happen when we arrive in Sumatra.  As it turned out our passage through check-in and security was as smooth as I have ever known it.  The check-in staff knew nothing of the runway closures, or of the fire which caused it all in the first place.

The A380 is a huge plane with 471 passengers and a multitude of crew.  I worked out, based on what we had paid for our tickets, that had all 471 passengers paid the same fare  the income from this flight would be in excess of half a million pounds!  Many would have paid more so my guesstimate is conservative.  With two floors running the length of the plane you are, perhaps, not aware that everything you can see on your level is replicated above.  the service was good and the food excellent.  Twelve and a half hours is a long time to be cooped up in a plane, no matter how large it is.  Fortunately, I was sitting in row 62, the back row, so it was easy for me to get up and stretch my legs. However, the strange thing about this flight was that it was dark when we took off, the window blinds were kept down until the point of landing in Singapore when it was getting dark for the next night.  In effect we were getting two nights together without a day between.

Our time in Singapore was reduced to about an hour before our short flight to Medan.  Wanto and Sam met us on arrival in Medan.  By the time I had sorted out changing money all the students were through immigration, the bags collected off the carousel and we were heading for the waiting bus.  It was about 28C and very humid.  Before we left Medan we went to a restaurant where they were waiting to provide us with our first taste of Indonesia. Either all the prisoners had been recaptured or were as far away from Medan as possible, we saw none of them. Just the tigers to liven up our jungle trek to come!

By the time we left the restaurant the hour was quite late but this meant that the roads were not crowded and the expected four hour journey was covered in two.  We arrived at the Rindu Alam Hotel in Bukit Lawang at midnight.  The rooms were fairly basic with less than adequate air conditioning.  Remarkably I slept quite well and overslept! 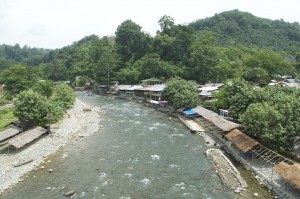 We decided not to visit the orangutans in the morning but to use the time to acclimatise ourselves, organise personal money and to acquaint ourselves with Bukit Lawing, a village where all life seems to revolve around the banks of the Borhorok River.  It was quiet and relaxed and where ever we went we were met with friendly faces and smiles.