After a quiet, groupless night in the hotel, Hira and Bishnu came to pick me up at 7.00am for the drive down to Chitwan, a hot, jungle environment in the south of Nepal bordering India.

Once out of the Kathmandu valley the journey became more civilised. There are a great many slow moving lorries on the road and overtaking on the winding road can be a little scary at times. Our driver was pretty careful but he always had to be prepared for the unexpected from every other driver. Many of the houses at the side of the road had been bulldozed and there were piles of debris where once houses and businesses had stood.  Apparently, they had all been built illegally and, as a result, had been destroyed.  Unfortunately the piles of rubble and timber are less attractive than the buildings had been and your eyes are automatically drawn to the unsightly mess rather than the more attractive scenes beyond.  It just seems typical of Nepal; no job ever seems to get finished! 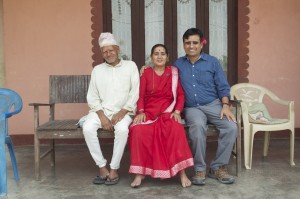 Hira with his parents

We reached the Chitwan in about four and a half hours and our first port of call was Hira’s parents, living in their little farmhouse. Hira is the first generation not to be a peasant farmer and the contrast between him, a city dweller, and his parents, particularly his father, was remarkable. The very simple house is surrounded by fields of rice and maize, a tranquil agricultural scene. Birdsong is all around us. Just to one side of the house is a byre with buffalo and a couple of cows. A large hayrick is beside that. The water supply comes from underground via a hand pump and adjacent to that is a digester of animal and human waste which provides all the necessary gas for cooking. It is incredibly basic living which has a charm of its own to the casual visitor.

I was made very welcome, given coke and a plate of mixed fruit, although keeping the flies off the fruit became a real challenge.

Leaving his parents we went to visit the school where Hira was educated as a boy. Certain government schools are selected to cater for and integrate children with disability. This particular school has 27 blind or visually impaired students of variable ages. Hira’s idea is that those involved in the teaching and caring for the blind need practical support rather than financial support. The head teacher may contradict that but we are not looking to give financial aid. 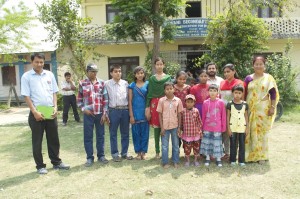 I was met by various people, teachers, village committee and others. There were so many of them I wasn’t really sure who was who. School does not open for another three days but about half the blind children were there. The teaching facilities are limited and the place looks untidy and unkempt.  The facilities in the senior section of the school seemed to be better and more building work was going on.

As we were about to leave I met a Dutchman who has been involved with supporting the blind in the area for a number of years. Adjacent to the primary school there is an almost finished new build which will become a learning and resource centre for blind people in the community. It has a conference room with special computers, a further computer room, a music room, a couple if craft rooms and a couple of bedrooms. This is for adult blind people to come to learn but I really hope these facilities will be available to the blind children in the school as they far exceed anything the school has to offer.

It was an interesting visit, with potential, but I am not making any promises. 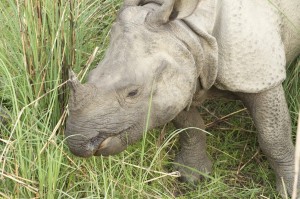 A female one horned white rhino

Potential business side of the trip complete, it was now time to enjoy myself. Settling in to the Rhino Lodge in a pleasant resort type village just outside the park, my first activity was an elephant ride. Normally you share this experience with three other people but now it was just me and my mahout. Also, normally, these rides last about one and a half hours but on this occasion, because I had expressed a desire to see a tiger, we were out for two and a half. We still didn’t see any tigers but we saw a variety of dear, rhino and lots of birds.
I had just enough time for a cold beer before I was off to a Tharu cultural evening in a purpose built theatre in the village. It was an impressive display but lacked the intimacy of other shows I had seen.

There was virtually nobody else staying in the lodge so I returned for a solo dinner, Hira and Bishnu were spending the night with Hira’s parents, before heading off to bed.
At 4.30am a dash of a different type occurred as I felt ill. Was it my meal last night or something else? I began to think it was the result of my time on the elephant with the heat of the sun beating down on my head and neck. By breakfast I was not feeling too bad and continued with the activities planned for me. 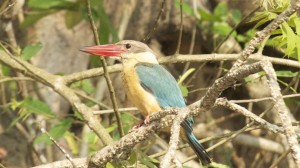 Going down to the river my guide and I took a dugout canoe along the river. Along the banks were many vividly coloured kingfishers and other fish eating birds, crocodiles with their snouts and eyes appearing just above the surface of the water. As we passed they would disappear under the surface in true Hollywood movie fashion. At one point we came across a large male rhino on the river bank. Here we had to be cautious. If we continued it might decide to charge into the river and attack the canoe. So we waited along with another canoe that joined us and one coming towards us until the rhino lost interest and turned his back on us.

Reaching our disembarkation point we went for a jungle walk to a lake favoured by rhino, tiger and all animals seeking a drink. Sadly nothing was at the water’s edge when we reached it but we did see plenty of deer, wild boar, birds and signs of rhino and cat activity.

The walk led us to the elephant breeding centre where there are mothers with babies of varying ages as well as expectant mothers. Whilst these animals are well cared for it was sad to see them shackled by one leg to a thick wooden post.  One or two of the young elephants were rocking backwards and forwards in a very repetitive way, very similar to children in one or two orphanages I have visited over the years.  I really did not want to linger here too long. 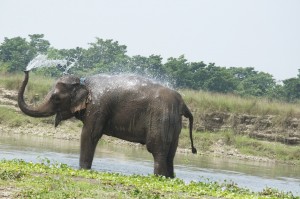 Returning to the lodge I was looking forward to bathing with the elephants but I found the sun oppressive. When it came to bathing with them I wandered down to take some pictures but soon had had enough and returned to the lodge to prepare for the journey back to Kathmandu. Hira had plans for visits on the return journey but because of my fragility we decided to go straight back to Kathmandu. It was not a comfortable journey but quite swift and I was in bed by 4.30. I intended having just a couple of hours rest but it turned into fifteen hours. Feeling much better this morning , if not a little fragile in the abdominal region, which is still not right. I will be very careful with what I eat today as I don’t want this when travelling tomorrow. Fingers crossed, not for the first time this trip.