Leaving Ankara we travelled south to the Ihlara Gorge. En route we stopped at Tuz Golu, a huge salt lake. We walked out on to the solid surface of salt reflecting the light and heat of the sun so that it hurt. A long way beyond where we walked was clear water but if you dug a hole in the salt it soon filled with brown water.
Continuing, we again took a slight detour to see the 13th C Seljuk caravanserais, at present going through some renovation. This was strategically placed on the silk route for travellers and traders to stay and rest. There were many such places every 40km along various routes, 40km being the distance that could be covered by a camel train in a day. It is an impressive building with incredibly thick walls, designed to withstand earthquakes. I expect it will be even more impressive after the renovation work is completed.
By the afternoon we arrived at Selime and the start of our trek up the Ihlara Gorge. The approach to the village brightened up what had been scenically a rather dull and featureless journey. Above the village was a cliff made up of conical towers of rock. Unfortunately we did not stop long enough to admire them. What was to follow was well worth it. The Ihlara Gorge is a deep cleft between 300 and 500 feet deep, cut into the featureless landscape above. From above you would not know it was there until you almost fell over the edge!
We followed the small river upstream over grassy meadows, through small cultivated areas and willow trees enjoying the moisture provided by the river. The water was clear and teaming with small fish and frogs. Above the lush valley floor sandstone cliffs towered above us. There were many holes carved into them where ancient cave dwellers had once lived. These were often monks and hermits but they would also give good protection during conflict as well as the advantage of height over any would be attacker. We visited a number of these dwellings which provided cool respite from the heat of the afternoon. Something we spotted several times, which carry their own cooling house, we’re tortoises – an unexpected bonus.
After a cooling paddle in the river we soon reached camp in Belsirima village. There we could relax on canopied platforms built over the river with thick cushions to lounge on. The fast running water inches below us helped to cool the air around us making it very pleasant. The night was spoilt by dogs constantly barking and two pups decided to tear a fly sheet to shreds, much to the concern of the occupants.
If we thought the first day in the Ihlara Gorge was impressive, the second was more so. Remarkably dozens of churches were carved into the rock cliffs and we visited a couple of them. Not only were they carved into the rock but the walls and ceilings were painted with frescos.
Just before we came to the top of the gorge the river tumbled over a waterfall into a plunge pool. Ten foot cliffs arched around the pool, which proved to be deep enough for jumping in to. We spent a good hour enjoying the opportunity to get cool and the students became ever more inventive in the way they leapt into the water.
The bus was waiting for us and took us back to Selime for lunch, a feast enjoyed more by the swarms of wasps, which spoilt an otherwise excellent meal. After lunch we drove to Goreme in the heart of Cappadocia and the site of some incredible rock formations. 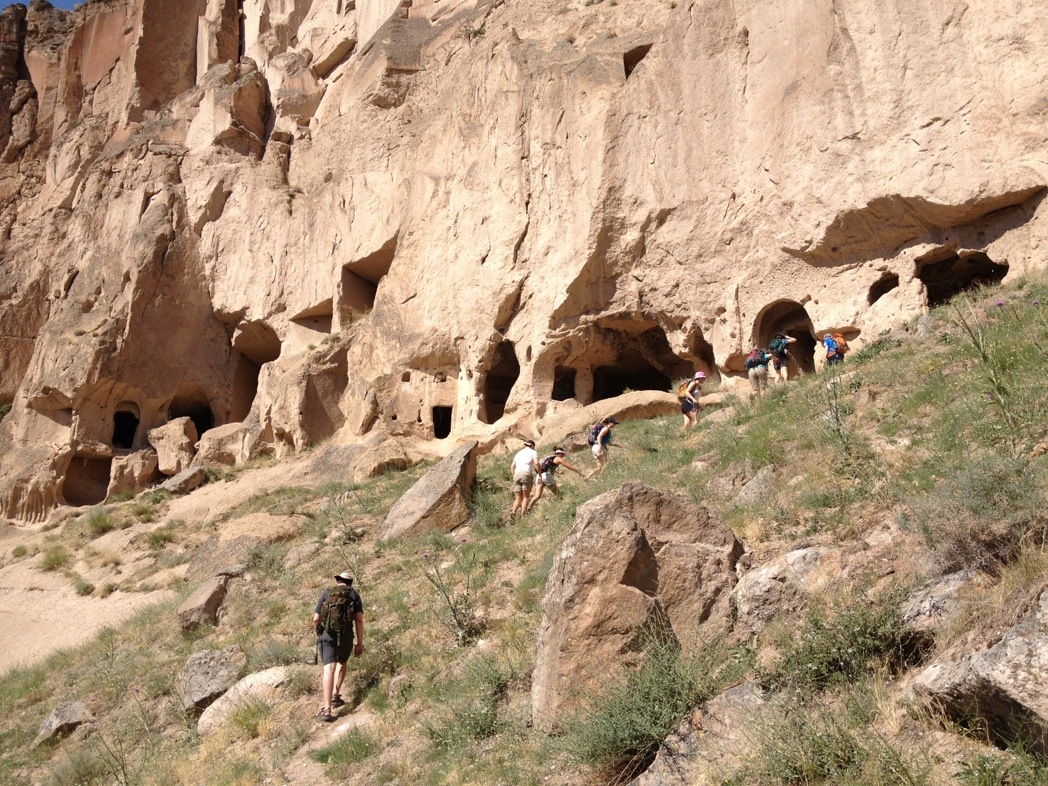