This region has some of the most amazing and awesome rock formations on earth. We first came across them as we approached Uchisar where there are two towers of rock sticking up out of the centre of the village. The bus then dropped over the lip of the valley and the whole panorama of rock formations lay before us. There was too much for the brain to observe and take in. Not stopping at Goreme, we continued a few kilometres to Pasabaglari, or the Valley of the Priests. Here there are numerous pillars of rock with hats of harder rock perched on the top. The soft pillars have had rooms carved into them, presumably inhabited by priests and monks.
Having explored the area we were heading back to the bus when an ice cream seller entertained the group with ice cream tricks before giving Tom Busher a free one. This was all done to encourage the rest of the group to buy from him. It would have been successful had Omer and I, not realising what was happening, summoned everybody to board the bus. The expression of disappointment on the ice cream vendor’s face was a picture to behold. The bus took us to camp in a field belonging to a hotel, which included a swimming pool as one of its assets. The hotel was largely empty as Sobek Travel had bought it with the intention of developing it but were awaiting planning permission.
The following morning I was awoken by the sound of a burner firing off close by. Knowing that balloon flights occur every morning, I opened my tent to have a look, expecting to see a couple of balloons in the air. What I saw took me completely by surprise; I counted 35 balloons! Wow! What an impressive sight. The other thing that went through my mind was, ‘I want to do this.’
After breakfast we went on a most amazing walk of about ten miles through all the best features Cappadocia has to offer. The area is abundant with ‘fairy chimneys’ or Hoodoos, which are tall, thin spires of rock that rise up from the valley floor. They are made of relatively soft rock but are capped by harder, less easily eroded stone that protects the column on which it perches. 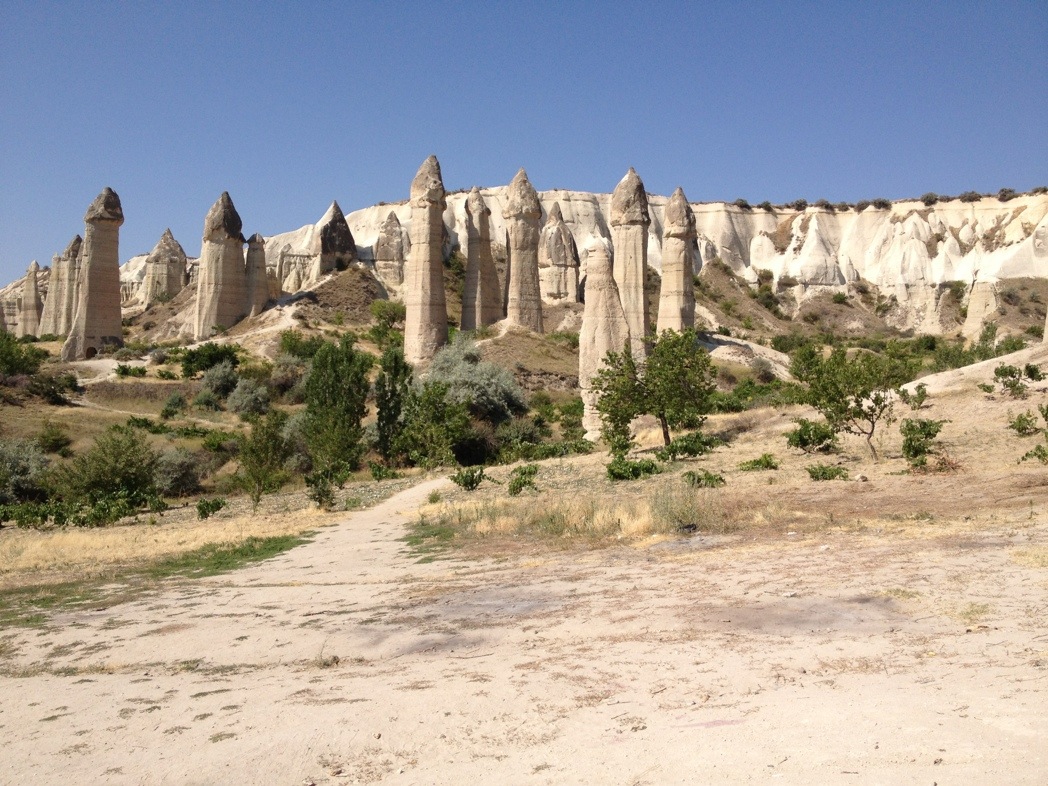 To begin with we walked through the White Valley (Akvadi), which not only has layers of white rock that bears a similarity to liquid icing that has set, but also some rather fallic formations. These caused much hilarity. The route took us through the valley bottom with all the magnificently carved rock towering above us. Eventually we climbed out, just before the village of Uchisar, to find a man under an umbrella squeezing fresh orange juice for two Turkish Lira – very welcome and much needed refreshment. Reaching Uchisar we climbed to the top of the Citadel, the huge rock rising out of and above the village. From the top there were panoramic views of the whole area. Descending, we called into a restaurant for lunch before completing our walk through Pigeon Valley back to Goreme. Pigeon Valley is so named because many of the rock pillars have been carved out for dwellings. These also had lots of small holes allowing pigeons to enter. Inside, wires were string across allowing the pigeons to roost. Every so often the droppings were collected for fertiliser, a practise that went on until the ’50s when commercial fertilisers became more available.
Goreme is a very interesting town as the houses and the fairy chimneys combine to form dwellings, restaurants and hotels. We went to such a restaurant later in the evening.
Back at camp a small group went off with Josh quad biking while another group went with Ellie for a proper Turkish bath. How they could consider such a thing after a very hot day, I cannot imagine. For the majority the lure of the pool was all they needed to keep cool and relax.
Before we left Cappadocia Jenny, Paul and I decided to take an early morning hot air balloon ride. We were picked up from camp at 4.45am and taken to the office to register and pay before being taken to the take off site. There were twenty of us in the basket, mostly Japanese, and it was a truly memorable experience. Upon take off we moved very close to one of the fairy chimneys before climbing to 1000m for the sunrise. The early morning glow on the various shades of rock was spectacular. Having climbed and drifted over the campsite and then Goreme, we dropped into Pigeon Valley, where we had walked yesterday. I was really struck by the manoeuvrability of a balloon with such a big basket. The balloon. Sprain literally steered us around trees and rock formations. Rising out of Pigeon Valley we then flew past the Citadel and beyond. It was fascinating to watch the support vehicles chasing the balloons in an effort to reach the landing sites. Our captain chose his spot and landed us very smoothly. The vehicle withe the trailer pulled up alongside. Before we were allowed out of the basket the captain lifted the balloon with a short blast from his burners and planted it gently on to the trailer. How cool is that? We climbed out to a glass of champagne and orange and a certificate.
The experience completed we climbed into the minibus for the journey back to camp. As we were to be the last to be dropped off at camp the minibus took us to parts of Goreme that we had not seen before and you could easily spend more time in this fascinating small town.
Back at camp we just had time for breakfast before embarking on the next phase of our Turkish adventure, the Taurus Mountains. 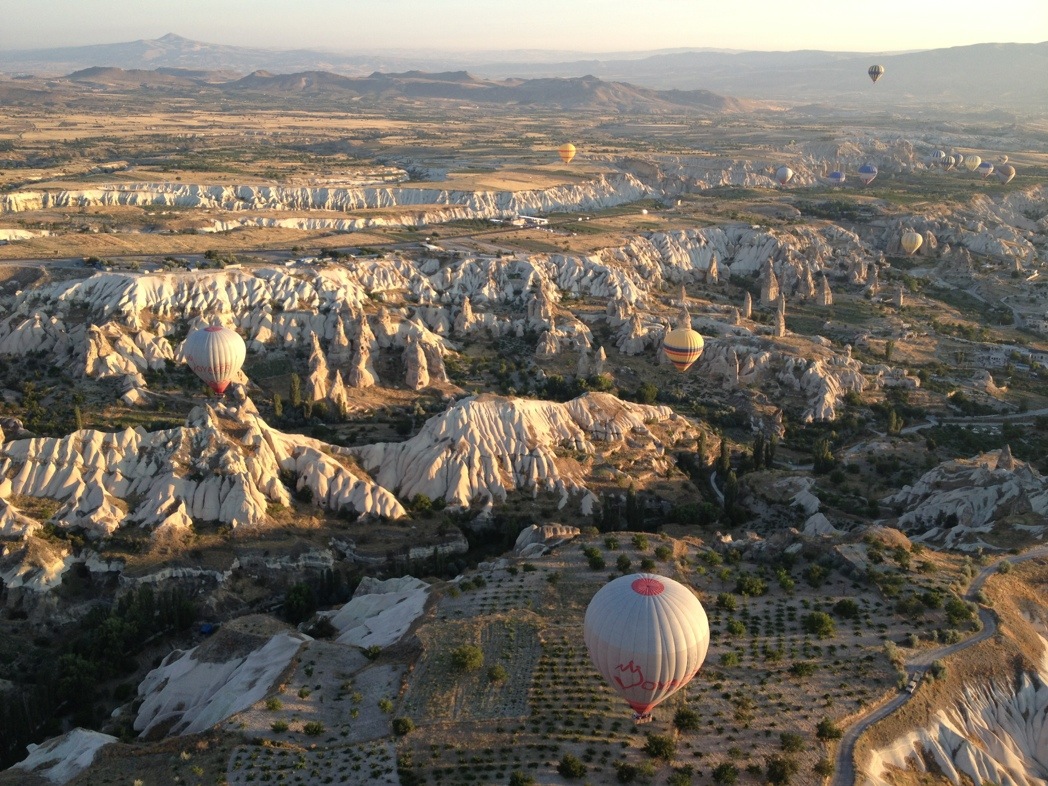