Woke up to a bright morning overlooking the harbour entrance to Dunedin.  Our objective today was to get as far as Timaru and see whatever takes our fancy on the journey as we head north towards our appointment in the Marlborough Sound next Saturday.  Dunedin looked even better in the morning sunshine, particularly as it was so easy to drive through and the suburbs on the north side were much more pleasant. 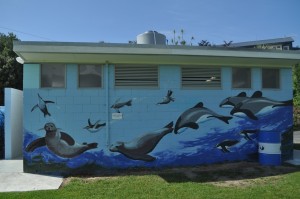 Every so often we would take a detour from the main highway down to the coast.  The first such venture included us looking for some loos.  It took a while to find them but when we did they have to be some of the most colourful loos in the world.  I have seen lots of loos during my travels around the world but these have to be some of the best. 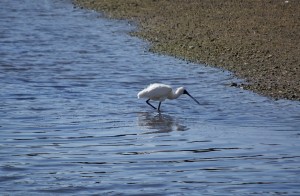 The whole area was alive with birds of all types, waders, herons, gulls, shags, even harriers but I had to exert some self-control over my urges to spend time photographing.  However, I did weaken when I came across a spoonbill.  I just had to stop and get the camera out.  They are bizarre birds with clapper boards for beaks.  They must make kissing very difficult!

Later we detoured to Shag Point.  Not only is it a shag nesting area but is also home to fur seals and Yellow-Eyed Penguins. 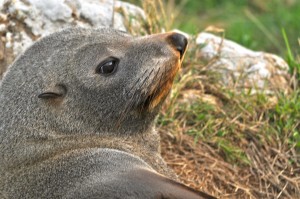 We only saw one shag flying by, no penguins but dozens of fur seals basking on the rocks in the warm sunshine.  Wherever we looked there were relaxed seals languishing on the colourful rock, occasionally bouncing their way down to the sea for a cooling dip.  A really magical moment. 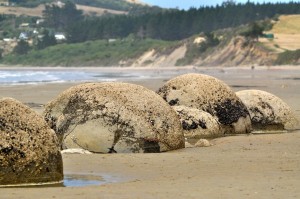 A further excursion took us to the Moraiki stones, a baffling geological phenomena.  There are numerous boards with Maori legendary reasons for their existence but when it comes to actual fact there is still some uncertainty as to how and why they formed.  They are remarkable formations, nevertheless.

Detoured out, we made our way direct to Timaru and our superb accommodation for the night.

A travelling day, but some laughs along the way!  Every place with a Maori name begins Wai….so when I asked John where we were, he said it must be Waicaki (because we were in a coffee shop with lots of tempting cakes!)  Later we visited the Moraiki stones………which look like donuts that have landed on the beach.

The weather is much improved, brighter and warmer.  Adam & Anna have landed safely in Auckland after their long flight from Birmingham, UK.

We are ensconced in a comfortable motel suite in Timaru, overlooking Caroline Bay.  Lovely!