The forecast for today predicted rain in the morning and the likelihood of it improving in the afternoon.  There were plenty of puddles to greet us as we ventured out at about 9.30 but at least the rain had eased.  On reflection we thought we had been a little harsh on Dunedin, so we decided to give it another chance, to redeem itself in our eyes. The place to do this was the Settlers Museum.  Unfortunately it was closed for a refurbishment until late 2012.  Oops!  Not a good start.  The Lonely Planet spoke very favourably about the Otago Museum, so we went there instead.  It was brilliant.  It has a Discovery Centre, Maori and South Sea Islanders cultural area, Otago geology, flora and fauna, geology and a butterfly farm.  We went first for the Discovery Centre, primarily designed for children, as there are lots of buttons to push and practical things to do.  I loved it; it is far too good for children.  Having had an hour of fun we then did all the adult things and learnt lots of adult things, not that I can remember any of them now.  All I can remember is the fun of pressing buttons and making incredible things happen!

The only thing that did disappoint me was the display commemorating the life and achievements of Sir Edmund Hillary.  It had some of his kit from the Everest ’53 Expedition – his ice axe, mug, gloves etc.  The disappointment came from an information board about his life.  On it was a picture of Everest, the highest point on earth, only it wasn’t Everest, it was a picture of Ama Dablam from Dingboche.  I tried to speak to one of the staff but she didn’t really know what I was talking about.  I will do my Victor Meldrew when I get home and write to them.  It is a serious mistake, though. 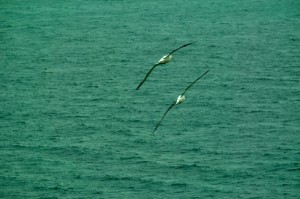 In the brightening weather we drove along the beautiful 30km Otago Peninsular to the very end at Taiaroa Head, where the Royal Albatross Centre is situated.  It is the only place in the world where albatross nest on mainland.  In all other cases they nest on very remote islands a long way from any mainland.  They are remarkable birds that generally live up to 35-40 years, although one was known to live for 62 years.  Once the young have left the nest they tend to take to the wing and spend the next five years flying around the southern seas before returning to its birthplace and finding a partner, with whom they will remain faithful for the rest of their life.  They tend to breed every other year as both parents are fully committed in rearing their young and they need time to recover before they start the process all over again. 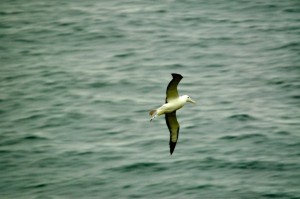 There are several breeding pairs on the headland and we were fortunate to be able to get quite close to one parent with a chick.  While watching them a pair of juvenile birds were whirling and swirling on the breeze.  They synchronise their flight beautifully and are so graceful with their 3m wingspan.  A fabulous opportunity and a real privilege to be able to watch them. 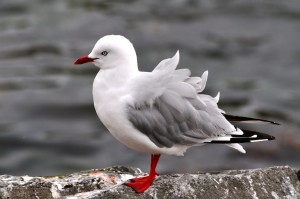 Taiaroa Head is also a nesting area for a huge number of other birds.  There are thousands of the common red-footed gulls.  They may be a pain and scavenge for food from humans but they are extremely beautiful.  There are also black-backed gulls and Stewart Island Shags, which interested me particularly.  I had an enjoyable time filming them.  I just managed to spot a spoonbill but the photos did not do it justice. 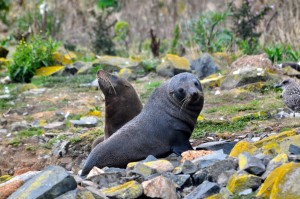 A pair of juvenile males

Adjacent to Taiaroa Head is Pilot Beach.  Not really knowing very much about it we ventured down and came across a colony of fur seals, a lot more active than the sea lions we had seen on other occasions.  We were so lucky to be able to get so close to them, to photograph and film them.  I am really enjoying spending time watching wildlife and get really absorbed in what I am doing. 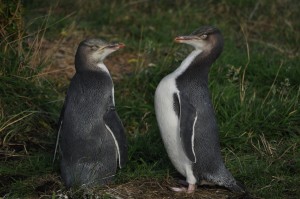 We were booked into Penguin Place, about 4km back towards Dunedin, in a lodge perched on the hillside overlooking the harbour entrance.  It was a stunning location but we stayed there really because we could enjoy some close encounters with the Yellow-Eyed Penguin.  I’m going to let Angela write about penguins so over to Angela…… Hello! from the yellow-eyed penguin hide on the south side of Otago Peninsular on an unnamed beach.  We have been brought here by bus and have been led on foot thru man-made trenches, which camouflage us from the shy creatures. 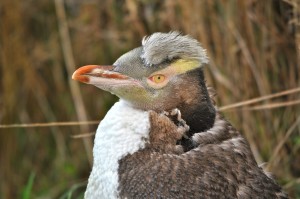 Surprisingly they prefer to nest among trees and shrubs so the reserve owners are replacing the original vegetation, which the European settlers had removed in order to provide sheep farming land. Here we are treated to 2 ‘chicks’, which are the same size as their parents already, tho only 6 weeks old.  They are 6/7 kilos.  We went on to the cliff top to view seals and some moulting penguins.  They are fluffy bundles and will soon leave the nesting site, find a mate and return.  It has been very special to see the world’s rarest penguin at such close quarters.

90 mins later we are back at the Lodge eating our quick pasta meal before going to Pilots Beach to see the tiny Blue penguins coming ashore at dusk. How exciting to be peering thru the gloom, led by the volunteer guide’s red torchlight, hoping to see a raft of miniature penguins landing with the surf.  We were rewarded by two groups coming ashore in quick succession then strutting, running and clambering their way up the rocks and undergrowth to their chicks, who are by now screeching their greetings from adjacent commandeered rabbit holes! A great day!