The good thing about not having a fixed itinerary is that you can never be sure what is going to happen. Last night when we went to bed we were planning on driving the Christchurch and spending the next two nights there.  This morning we decided to head up into the mountains for a night, staying in the Arthur’s Pass Village, just below the highest pass in New Zealand, Arthur’s Pass at 1040m.  We had had several days of coastal exploration and it was time to venture inland to some mountains. 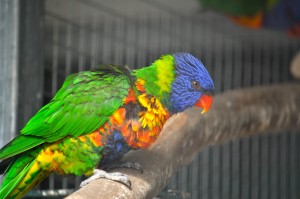 Before we left Timaru we ventured down to the beach, a good 500m further out to sea than it was only a century ago.  It is a lovely area of grass, dunes and entertainment facilities with a sound shell stage and audience seating, a 1950s style fairground for children, a miniature railway, cafes and bars, and a walk in aviary with exotic birds from New Zealand and Australia.  With the exception of the toilets and the aviary, it was all shut down; children are back at school so not enough to keep it open.  There was a slight eeriness about it but it is good that these facilities are available. 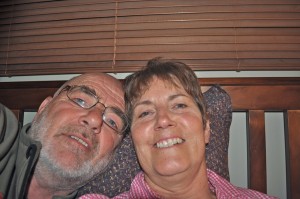 The other change that took place today was a visit to a hairdresser, for us both, in Ashburton.  Certainly for me, it was time to spruce myself up for the wedding on Saturday with an all over number one trim.  When I say all over, I mean head and face.  If I told you that the last time I went to a hairdresser it cost 4 shillings and 6 pence (22.5p in new money) you will realise just how long ago that was. When you don’t have much it is not worth spending a lot of money on.  Angela also had her head trimmed and it looks great.  The total cost for the two of us, 78$ (£40).  Angela’s must have been really expensive! At least I didn’t have to sit on a wooden board across the arms of the hairdresser’s chair. 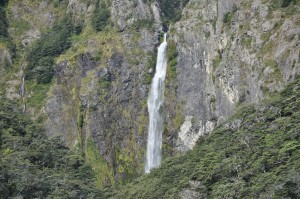 We then headed inland, leaving traffic behind, and soon found ourselves in beautiful mountainous country.  The clouds that had lingered over the coast during the morning cleared and the mountains welcomed us with clear blue skies.  We had booked a cabin in Arthur’s Pass, courtesy of the i-site in Ashburton, soon finding it and settling ourselves in.  I decided to take myself off for a walk up to the Devil’s Punch Bowl, a waterfall above the village.  The walk climbed quite steeply up through silver beech trees to a viewpoint in front of the waterfall.  The 131m waterfall is quite impressive and as the sun shone there was a rainbow in the spray at the foot of the fall. 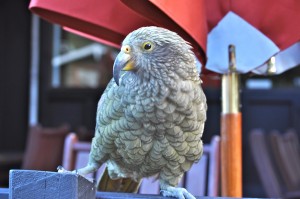 A Kea with plenty of character

On the way back, as I entered the village, I came across a woman putting the rubber trim back in place on her car.  She, or her car, had fallen victim to the mischievous behaviour of the local Kea.  There were several of them around and as I got my camera out to photograph them one came right up to the camera and started pecking at the lens.  He was far too close for me to take a picture.  I hope our hire car is safe and we can leave here unscathed in the morning.

We had spent a comfortable night in our motel suite, overlooking the park and beach beyond in Timaru.  These suites are very spacious and provide family accommodation.  We made our own toast & marmalade then walked locally.  John was chuffed to find budgies (reminding him of his childhood pet, Billy) among the more tropical cockatoos and parakeets at the aviary. 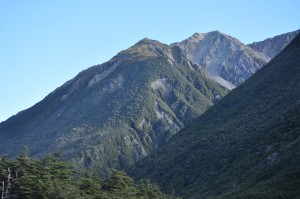 The journey was uneventful, we resisted the temptation to veer east to the coast.  Our stop in Ashburton brought our journey full circle as we had stopped there 16 days ago.  Continuing inland the trip to Arthurs pass took 2.5 hours.  The weather improved and we had a warm afternoon & evening.  We chatted easily to a Canadian couple over dinner.