When we flew to Lukla for the start of our trek I was pleasantly surprised by the swift efficiency and the quiet atmosphere of the check in. Not so today. Words like chaos and pandemonium spring to mind. It appears that what has made it so today in particular is a forest fire near Lukla. It did not help that a group of Japanese trekkers were blocking up the area while their leader checked them in. There is no need for everybody to crowd round the desk and make it very difficult for everybody else. More bizarrely, in the middle of all the chaos were trays of eggs stacked up in front of the desk, belonging to no one obvious. Eventually they were removed and one can only assume that they found themselves on a flight to Lukla.

Out of all the pandemonium a boarding card is eventually produced allowing me to pass through security into the relative calm of departures. Transit through departures was quite swift, but having reached the plane we then sat on the tarmac for twenty minutes while they refuelled it.

The flight was good but as we made our approach to Lukla the whole hillside on our left was on fire. Huge plumes of smoke rose and followed the shape of the hill, fortunately away from our flight path, and flames could be seen leaping above the smoke. There is absolutely no mechanism for putting these fires out, no access and no easily available water supply. As the day lengthens the wind increases and fans the fire. All that anybody can hope for is either heavy and prolonged rain, or for the fire to burn itself out. So far it has been burning for two days and seems to be growing with no prospect of either.
As I walked up the Khumbu the smokey haze provided much diminished views of the mountains and the smell of burning pervaded the air. 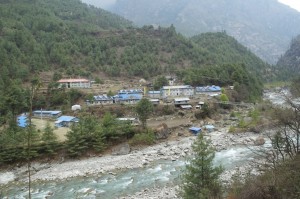 I managed to reach Phakding in two hours and stopped for lunch and a short rest. Although I only had Rara Soup I felt full and my afternoon walk up to Monjo became more of a tired trudge. Nevertheless I reached Monjo in less than two hours from Phakding, arriving shortly after 3.30, before the arrival of the group.

After about half an hour Mark, followed by the rest of the group, appeared at the top of the steps leading up to the exit from the national park. As they walked passed Ang Darki’s lodge I stood in the doorway and asked if they were going to ignore me. My appearance took them by surprise and there was much noise and hugging. 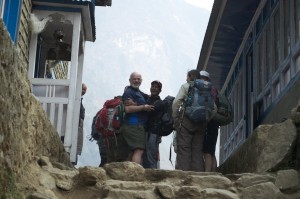 Bishnu is happy to see me! 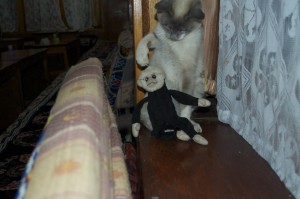 Monkey gets a pasting

Our lodge was just a little way down the hill. It looked good but the rooms were a bit dungeon like and the food was a huge, tasteless disappointment. I shared a room with Stephen and Nathan and we had a problem with our shower providing us with an indoor pool. Nigel and Mike had sewage swilling around on their bathroom floor. The poor food and disappointing accommodation left us feeling the need for some entertainment.  The lodge had a resident kitten, an attractive creature with a playful nature.  For some reason I had already been awarded the monkey for leaving my sun glasses at the lodge in Namche several days earlier. It seemed we had some ready made potential entertainment.  Here we had a kitten that wanted to play and a monkey that would make an ideal toy.  The kitten did not need much encouragement to attack and it proved very entertaining. 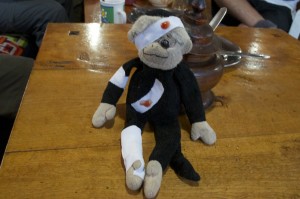 The scars of battle!

In the morning the monkey came to breakfast bearing the scars of battle!

We were quite pleased to leave but before we did we thanked our porters and gave them their tips as they would be wanting to return to Base Camp with another group as soon as they had delivered our bags.

The walk back to Lukla passed without incident although it was very hot and the second half spent predominantly climbing up to Lukla proved tiring and arduous. At some point I got fed up of carrying the monkey, which has, incidentally, made a remarkable recovery from its battle with the kitten, and gave it to a little boy on the understanding that he shared it with his sister.  Clearly he didn’t understand me and before we left the rest spot an argument over the monkey was already brewing.  Their mother will love me!

There are some pretty tired bodies in the group and, whilst they have had a fantastic time, they are quite relieved that the walk is completed.

Our only concern now is getting out. There have been problems today and not everybody got out. The wind, often a tail wind, makes landing at Lukla very difficult.  Landing speed on such a short runway is crucial if the plane is to slow down in time before the runway ends.  If there is a significant tails wind, that increases the speed of the plane as it lands, reducing the time is has to slow down.  When the wind reaches the point where doubt is cast in the pilot’s mind, flights are cancelled.  That is what happened today and while some people failed to get out, others did not manage to leave Kathmandu. As a result  there has been a flurry of activity around the helipad with stranded passengers paying the extra to keep to their schedules. The problem with those that are stranded is that they do not get priority the next day; that goes to those with day specific tickets.  The stranded passengers are forced to wait for the third or fourth group of flights, and, as is so often the case, those are the flights that are cancelled.  The potential for being stuck in Lukla for several days is a stark reality.  Fingers crossed.