When things don’t necessarily go according to plan it is inevitably disappointing.  Seeing and photographing a whale’s fluke as it disappears under the waves has always been an ambition.  Understandably, I was excited about the prospect of fulfilling that ambition today.

The alarm went off at 5.30 this morning.  Even before I peered through the curtains I knew what the weather was like outside.  I could hear the rain on the corrugated iron roof of the motel, but more worryingly I could hear the wind howling through the trees on the other side of the car park.  I should have guessed then that the omens were against us.

Without a car, we struggled to the minibus shuttle for our lift to the station.  Checking in was easy and the trolley at the station helped enormously in getting our luggage to the luggage van.  We were assigned our seats in a very comfortable carriage with windows, not only along the sides but also over much of the roof.  The train consisted of two carriages, a buffet car and an open observation carriage at the rear as well as the luggage van.  It was all brand new stock. 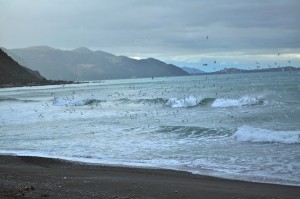 We set off in the half light with the rain beating heavily giving us a watery outlook.  It was not long before the rain cleared and the light brightened.  We were travelling through lovely agricultural countryside; a mixture of sheep and cattle farming with an increase in vineyards as we travelled north.  Each seat was equipped with a headset and every so often a commentary gave us information about the areas we were travelling through.  About half an hour before we arrived at Kaikoura we followed the line of the coast and the journey became more interesting and spectacular.  Mountains drop dramatically down to the sea and the railway line hugs the shore and disappears into tunnels every-so-often.

Arriving at the ‘whaleway station’ (not a joke) the news was that all the morning sailing for whale watching had been cancelled.  The decision about the afternoon sailings was still pending.  There was a southerly gale blowing with a deep swell, making sailing unsafe.  It did not look good.

The shuttle took us to our accommodation for the night and then we ventured out to have a look at Kaikoura.  The sea in the bay looked very benign and it was hard to believe that sailings had been cancelled, but the bay is sheltered from southerlies by the headland to the south of the town.  The town itself is very pleasant and the scenery surrounding it is particularly spectacular, more so I suspect when the weather is good.  After a coffee we made our way to the whaleway station to see if there was any more news.  There was and it was not good.  All sailings for the day were cancelled.  Having got a refund we rubbed salt into our wounds and watched a film that was running about whales.

We had to make up for the disappointment so I suggested we walked around the headland, a walk that would last about four hours. With a sandwich each in my rucksack and camera gear ready we set off in beautiful sunshine.  Every so often information boards gave us information on the history of Kaikoura as a whaling station, about the animals that live on the edge of the coast and the birds.  On the end of the headland is a seal colony and they were all sleeping under the bushes, out of the wind, by the side of the car park.  Even they didn’t like the weather. 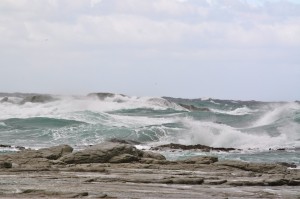 A good reason for not going out in a small boat!

From the headland it was clear why the whale watching had been cancelled, the sea was very angry.  As we walked up on to the cliffs we felt the full force of the wind, which, at times, knocked us off balance.

Eventually, we made it back to Kaikoura and stopped for refreshment at Monteiths, which rolled into dinner, before we headed back to our room for an early night.

In 2006 I was leading a group of students on a trek in India.  The climax of the trek was to climb Menthok, a peak of 6250m.  The night before we were due to climb to the summit we camped by the glacier in a blizzard, which raged all night.  We were due to start the climb at 3.00am but delayed until 5.00 and again until 7.00.  In the end the conditions were not right.  The blizzard had made the conditions difficult and dangerous, the more so because there now would not be enough daylight hours for us to safely complete the job.  On gathering the group in the mess tent, I gave them the bad news.  There was disappointment all round.  On that occasion we were in India for 28 days and that we were on a 28 day journey. I asked them to look at this day, this disappointment, as one twenty-eighth of that journey.  In that context it was not really that important.  We are away from home for 42 days so in the context of the whole journey our half- day whale watching experience is not really that important. 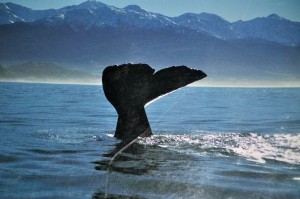 What we should have seen

I still want to do it, though.

‘Where do they weigh whales?……..At the whaleway station!!’  a favourite primary school joke, usually for a Jonathan Woss teller!  But very apt here.

So Kaikoura will need to be revisited to redeem its promise in our hearts.

Charming mallards tap on our patio door, how trusting and welcoming is that!  ‘Sweet’, as they say here.