We woke up to a beautiful morning, clear skies with extensive views across the lake to Tongariro.  Remarkably, we discovered at the i-site that the crossing was still closed.  It seems somewhat restrictive if they close the route down at the hint of a breath of wind.  We now had other plans in store.  Our birthday present to Stephen was going to be a bungy jump.  We took him to the Taupo Bungy Jump site on a cliff above the beautiful Waikato River, New Zealand’s longest river emerging from Lake Taupo.  The bungy jump is from a platform jutting 20m out over the white cliffs dropping 47m to the beautiful blue waters below.  We paid the $149 for the jump, left Stephen to prepare while Angela and I went to the viewing platform to watch and film the jump.  It took a lot longer for the event to happen than we thought and watching Stephen in the queue on the platform he looked a little bored.  He also looked perfectly calm.  I suppose, when you do what he does for a living, flying into remote jungle airstrips in Papua every day, a bungy jump is pretty insignificant.  Eventually, his turn came, he was hitched up and without any fuss he stood backwards on the platform and immediately threw himself in a backwards arc into thin air.  The plunge took him almost to the water (he was disappointed as he had requested a head dunk) before the elastic pulled him back up towards the platform and down again.  There were several more bounces before he dangled above the boat ready to pull him in and detach him from his bungy.  Meeting him a few minutes later he was perfectly calm and relaxed about the whole affair.  If you want to see his bungy, you will have to wait until I put the video on to You Tube. 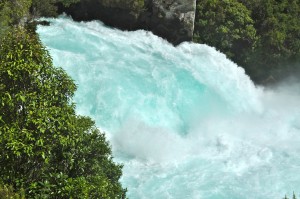 A little further downstream from the bungy are the Huka Falls.  Despite the drop only being 20m they are well worth a look, simply to stand in awe at the volume of water, which passes over them.  Leading up to the falls the river is about 100m wide but then it gets squeezed through a band of harder rock only 20m wide.  The pressure from behind forces the water to rush through the narrow gap and push it over the lip of the falls at the bottom end.  220,000 litres of water per second drop over the falls and despite the small drop they are spectacular.  You can only stand there and marvel at the power of water.  The Huka River produces 15% of New Zealand’s electricity needs and it is easy to understand why when you witness such power.  I was only disappointed that while we were there nobody came down in rafts or canoes.  That would have been a thrilling spectacle. 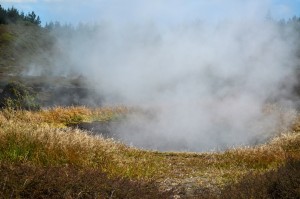 A fumerole at Craters of the Moon

From the Huka Falls we headed towards Rotorua but before we left the Taupo region altogether we visited the Craters of the Moon spectacle. The Craters of the Moon is a relatively new geothermal area, created by accident when New Zealand was developing its hydroelectric schemes in the 1950 and changed underground water levels.  Underground pressure shifted with new steam vents, thermal pools and mud pools appearing.

When you enter you are clearly entering an ancient volcanic crater.  A walkway through and around the bowl takes you to all the best bits although I would have liked to see a little more volcanic action.  The last eruption here was in 2002 and nobody knows when the next will be.  The predominant plant growing throughout the crater is Prostrate Kanuka, which likes the warm soil just below the surface.  At a depth of 5cm the soil is a toasty 33°C. 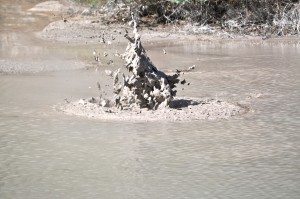 As we travelled towards Rotorua we kept getting distracted by places of interest off the main route.  We looked at the Wai-O-Tapu geothermal centre but it looked very commercial and was quite expensive.  However, not very far away we came across some impressive mud pools bubbling away and creating fantastic shapes with each minor eruption.  The small globules of uncontrolled mud reminded me of the impulsive leaping of frogs.

Another deviation took us to some thermal springs with a variety of hot pools to lounge in and a geothermally heated swimming pool, which was far too hot to contemplate any serious swimming.  We just had a cup of tea!

We also took a look at Waimangu, the newest geothermal area created by a series of volcanic explosions in 1886.  Unfortunately we were too late to visit this, but we might come back tomorrow.

Eventually, we arrived at Rotorua and found some accommodation on the lake shore close to a community open space, all set up for a concert tomorrow.  Some of the artists were rehearsing,  something to look forward to.

It was Stephen’s last night so we went out for a cracking meal with a bottle of wine to celebrate spending some valuable time with him.  We are not sure when we shall see him again so it is good to push the boat out a bit when we do.

Here we are in the middle of North Island but on a vast lake, staying at a ‘resort’ all of which makes it feel like the coast!  A great spot and frequented by families from Auckland in the North and from Wellington in the South.  Most New Zealand men are fishermen (bait is readily on sale at the petrol stations).  Hence Lake Taupo has become the trout/salmon capital of NZ.