During the night I became aware of strong winds and rain battering our wooden chalet.  The prospects for a good day did not look good.  Daylight brought some optimism as the rain had cleared, leaving strong winds.  The forecast spoke of 80kph winds easing to 50kph during the day.

Leaving Wanganui, we headed for Mt Teranaki, a perfect conical volcano used as a backdrop to the film The Last Samurai, because it could easily be mistaken for Mt. Fuji.  The drive was fairly uneventful, the only real interest being the damage we saw as a result of last Saturday’s storms.

Trees took the brunt of the storm and there was a lot of debris at the side of the road.  There were copses of large conifers and many of them had been broken in half as if they were match sticks.  In one area there was a whole woodland where virtually every tree had been snapped, leaving 15 – 20 foot stumps sticking up into the air as their only memorial.  Occasionally there was evidence of structural damage to buildings.

Leaving the main highway we headed for Dawsons Falls, one of the points of access to Mt. Teranaki.  As we entered the National Park, the landscape changed from agricultural to dense tropical forest.  The mountain above was shrouded in low cloud.  When we reached the DOC centre the temperature had dropped significantly and there was nothing of the mountain to see.  This was such a disappointment; the weather had played its part in preventing us from seeing New Zealand at its best.

To make up for the disappointment, in part, we visited Dawsons Falls, a single fall of water tumbling 18m over a rocky shelf.

Giving up with Mt, Teranaki we visited the i-site in Stratford, where we sorted our accommodation for the night in Taupo and decided to get there via the World’s Forgotten Highway.  Before leaving the i-site I enquired about the Tongariro Crossing, which Stephen and I would like to do tomorrow.  To my surprise I was told that due to the high winds the crossing was closed.  The forecast also predicted high winds for tomorrow so the prospects were not looking good. 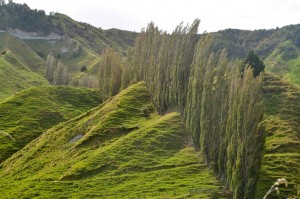 The beautiful and fascinating landscape along the World's Forgotten Highway

Leaving Stratford, the World’s Forgotten Highway took us on a winding route through some incredible and unique countryside.  The rock was predominantly limestone with lots of grassy ridges.  I could not determine the origins but feel it may be a layer of limestone raised by plate and volcanic activity, which then has been weathered to form this fascinating landscape.  Much of the land is farmed with both sheep and cattle but as we climbed to pass over a series of saddles the farmland was replaced with tropical forest.

Eventually, as we got closer to Taupo the road improved.  We stopped off at a viewpoint, which gave us excellent views of the Tongariro range in one direction and in the other, the direction we had travelled from, Mt. Teranaki, now clear of her cloudy cloak. 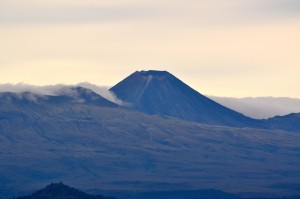 The mountains of Tongariro

We reached Taupo as the sun set magnificently over Lake Taupo, the largest lake in New Zealand.  When we stopped by the lake to photograph the sunset we were amused to find the stones on the beach to be extremely light and when we threw them into the water they initially floated until they absorbed enough water to make them heavy enough to sink.  They were rubbish for skimming. 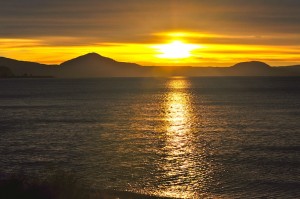 Despite the day holding a number of disappointments there were some highlights which made it another good day.

It’s been a day of highs and lows; both literally and metaphorically.   We were disappointed not to see the mountains because of the cloud, but our high level drive was full of unique landscapes.  We were finally rewarded with great views of the mountains.

No walk on the high hills but lakeside adventures beckon.