The day started brilliantly with clear blue skies and sunshine glistening off the lake.  What wasn’t quite so brilliant was having to say goodbye to Stephen.  Despite the fact that we have done it many times it does not get any easier.  We breakfasted at the i-site and while waiting for his bus Angela and I booked Te Puia for the evening.  Then it was time to wave him off.  Stephen gone, we quickly had to find something to do to take our mind off his departure, the last of many farewells we have had with our children in recent days.

We drove back towards Taupo to Waimangu, the youngest geological event in New Zealand.  Waimangu means black water and refers to the dark waters of Lake Rotomahana, meaning warm lake.  On 10th June 1886 Mt. Tarawera erupted violently, opening up a series of craters from the northern end of the mountain, all the way up the Waimangu Valley.  All life in the valley was destroyed and it became a steaming, bubbling wasteland.  There have been subsequent, smaller eruptions since, the last being in 1917.  Since then, life has returned to the valley, except to those areas far too toxic to support life, but there is always the threat that the area could succumb to another period of more violent volcanic activity. 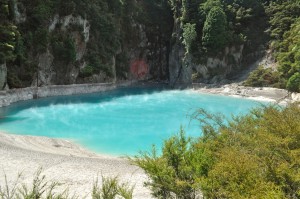 We followed a trail with markers showering points of interest and where we could refer to the ‘wander’s guide’ for information.  There are several steaming pools with sulphurous edges or silica stained edges and bubbling cauldrons, but the most impressive were the blue waters of Inferno Crater.  At the far end of the small lake are little shelves cut into the mud showing the varying levels of the water.  This fluctuates on a regular timetable; at the moment the level is low.  Gradually, over a period of several days the level will rise until the water spills over the edge and flows into Frying Pan Lake below.  Remarkably, when this happens the discharge of water from Frying Pan Lake decreases and only rises again when Inferno Crater Lake stops overflowing.  A geothermal conundrum. 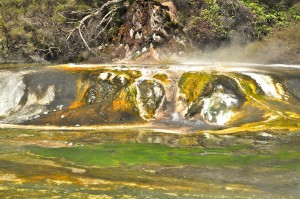 From Crater Lake we took the Mt. Haszard Hiking Trail, which proved to be less interesting than the more popular valley route where most of the geothermal features could be seen.  The hiking route eventually brought us back to the valley and some interesting terraces of silica.  These were not huge due to their young age but are developing well.  There are some vivid greens, yellows and browns.

Rather than walk back up to the centre we took the bus back, not because we are lazy but because we were in danger of running out of time before the next exciting event for which we had to be back at our lodgings for 4.00.

At 4.00 a bus came to pick us up and take us to Te Puia, a Maori centre on the outskirts of the town.  It is centred on a geothermal area, which carries some significance for the Maori culture and also gives them an opportunity to perpetuate the culture through a number of programmes. 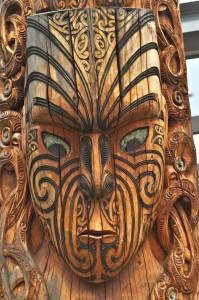 On arrival we were given a guided tour.  Our guide was typically quite a large man but he had a most magnificent voice with really rich tones.  We were soon to realise that most Maoris have rich voices, both in their speaking and also in their singing.  Until westerners started to arrive in New Zealand Maoris did not have a written language; all their stories and legends were depicted in carvings.  Many of the stories involved evil demons.  Hence the rather scary tendency in their wood carvings.  Te Puia has a wood carving school for young Maori men to learn the craft and perpetuate the culture.  Similarly there is a weaving school on site to perpetuate the skills involved in weaving New Zealand flax.

The tour then took us to some of the traditional buildings, the food store and the meeting house, which we would go in to later. 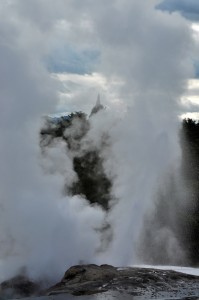 We were then taken around the geothermal features, the mud pools and, more impressively, the geyser with two spouts shooting out at different angles.  This geyser tends to emit jets of steam most of the time but there are periods when it is more active than others.  We were lucky and the jets were shooting several metres into the air.

Before we went into the meeting house we had a look at the Hungi, the underground oven where our food had been cooking for three hours on hot rocks.  In metal trays there were sweet potatoes, potatoes, lamb and pork joints and a number of whole chickens.  It now had to be prepared for serving so we returned to the meeting house where we were given a traditional Maori greeting. All greetings start out with a degree of suspicion, until it is verified that we come in peace and mean them no harm. 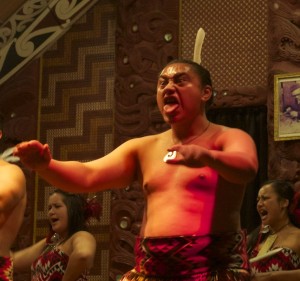 Taking our shoes off we entered the meeting house where we were given a display of Maori singing and dancing.  The singing has a definite operatic style to it.  The music was good but the performance is also given with plenty of facial expression.  This is so important in the Haka.  When Maoris prepare for war they face their enemies and perform the Haka.  The idea is to undermine the confidence of the enemy and fill them with fear.  The enemy perform similarly, but eventually one side will out perform the other and will take a definite advantage into battle, if it goes that far.  The Haka, as performed by our hosts did not intimidate but it was an impressive display and in a more hostile situation I think I would have run.  They are big men and can look very fearsome.

Entertainment over, we went into the dining room for our feast.  It was really good and there was much more food than just that cooked in the Hungi.  By the time the meal was over it was dark and we again had the opportunity to go up to the geyser and watch it perform in the night sky with a couple of lights playing on it. 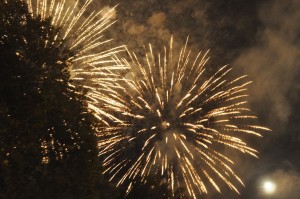 The finale to a good day

At 9.00 we returned to our motel and for the pop concert taking place on the open space opposite.  There were several thousand people there and there was a really good, family atmosphere.  It was a free concert, except for those who chose to buy seats in front of the stage.  What we saw was very impressive.  We only caught the last half hour as it finished at 10.00 with a spectacular firework display, bringing to an end a very good day.

Our stay in Rotorua is characterised by the aroma of the sulphur from the hot springs which bubble and steam throughout the area.  Our motel has under earth heating!

We said “Goodbye”, to Stephen as he boarded the ‘Naked Bus’ to Auckland, no not what you think just a stripped price!

Then we were off to Waimangu to cheer ourselves up with a walk through the newest geothermal park in NZ.  It was very impressive and a hot sunny day too.

Later we were treated to a Maori experience at Te Puia.  I loved it all, carving, weaving, a traditional concert (with Haka) and a hungi meal.  To top it all we saw the geyser blow TWICE, once in the afternoon and again at night.  My yearned for glimpse of a kiwi in the gloom was rather insignificant by comparison.

Lastly we enjoyed the last half hour of the pop concert by the lakeside.  We had a little bob too! Then marvelled at the fantastic fireworks, which brought it to a finale.