It was one of those weekends when you needed to be in two places at the same time. ‘Share the Vision’ had a training weekend based at King’s YHA near Dolgellau and I was leading a group of friends on a walk in the Forest of Dean on the Sunday. Not wishing to disappoint, I spent Friday evening and Saturday in Wales and Sunday in the Forest of Dean. 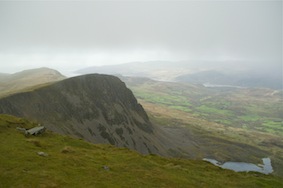 From the summit on a blustery autumnal day

Looking up the forecast for Saturday we were not encouraged. The morning was to be very wet following lots of overnight rain, very windy on exposed slopes, cold on the summits but brightening as the day progressed. Certainly the ground was waterlogged and the river flowing past the youth hostel was full, fast and coloured. However, having travelled all this way we were not going to be deterred from climbing Cadair Idris with the group. To make life easier for us we only had three visually impaired students to look after, although flat light, mist and rain was going to make it more difficult for them. With ten sighted guides we were going to be able to share the responsibilities.

Saturday dawned dry and reasonably bright after some heavy overnight rain. This was already a bonus and the longer it lasted the more optimistic we became. The aim was to drive round to Minffordd on the south side and walk across Cadair and back to the hostel on the north side.

The stepped climb up through the trees, with the Nant Cadair cascading noisily to our right, is steep and a heart pumping introduction to the walk. However, the advantage is that you gain height quickly and once clear of the trees the views, despite the dank conditions made the effort worthwhile. The students coped well with the guiding on the narrow steep path, with a running commentary of the terrain under their feet from the lead guide and a second behind to assist if needed with stumbles and foot placement. The experience gave the guides confidence in such terrain and those being guided felt they could trust those looking after them. 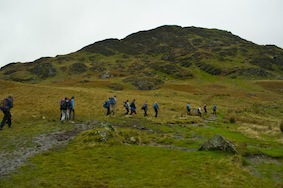 Heading up the Minffordd Track

Having reached Llyn Cau we then took the Minffordd Path around the impressive ridge to the south of the lake with cliffs and steep gullies falling away to our right. The path reaches a summit before dropping quite steeply over a rock strewn slope to Craig Cau. This downward slope proved to be the hardest obstacle so far and the guides had to be extra vigilant to get their partners down safely. Often, those with visual impairment find depth of field very difficult, not knowing how deep a step is or whether a gap between rocks is solid or not. The fact that they negotiated this safely gives credit to the guides and to the visually impaired in trusting those looking after them. 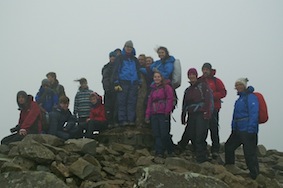 Throughout the morning we had had very little rain, just a few short spells, but nothing as bad as the forecast had suggested. While we had been walking around the ridge the summit of Cadair had mostly been shrouded in cloud but eventually that lifted, giving us a view of our target, which we reached three and a quarter hours after leaving the car park. On the summit we were exposed to the strong winds, so we took refuge in the substantial stone shelter where we ate our picnic lunch. We really had been lucky; we had a view below the heavy layer of cloud only a few metres above our heads and we had remained relatively dry. 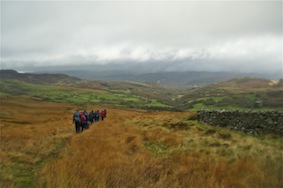 As we ate lunch we soon began to feel chilled so it was time to begin the descent. Now we were in the full force of the wind, and the heavy rain, which began to fall, making up for not soaking us in the morning. The wind meant that any exposed skin was peppered with sharp needles of viciously propelled water droplets. Despite the rain, the strong winds and one or two areas which required some rocky negotiation, it was a good route down. Occasionally glimpses of sunshine would light up distant hills highlighting the stunning colours of autumn from the vivid greens of pasture land, the varying yellows of ageing leaves to the copper coloured bracken and long grasses on the open hillsides.

Finally, our approach to the youth hostel was through the trees accompanying the fast flowing Gwynant, a beautiful way to end a walk, to reach warmth, dry clothes, a cup of tea and loads of yummy cakes!

Leaving them to enjoy their cakes, I headed back to Worcester to dry my kit before heading for the Forest of Dean. While I was going to be there the ‘Share the Vision’ group were going to enjoy another day’s walking near Dolgellau.

For me, the sun shone brightly on Sunday morning and it promised to remain so until a band of rain moved in late in the afternoon. Hopefully, by the time it came we would be finished. Twenty of us gathered in the car park at Symonds Yat, disappointed to see notices announcing that the cafe would not be open today, depriving us of tea and cake at the end of the walk. 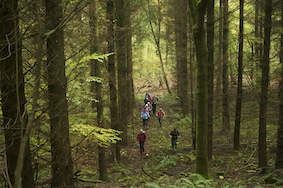 Making our way through the forest

There were still plenty of the vibrant autumnal colours to enjoy despite recent cold snaps, heavy rains and strong winds. The carpet of leaves on the ground was thicker and there was significantly more mud to squelch through. At 11.00am we paused for two minutes to reflect upon those who sacrificed themselves for our liberty. With dappled sunlight penetrating the trees and the sound of water on its hasty journey down the hill, it was easy to reflect on how lucky we were to be where we were. The carpet of leaves on the ground were reminiscent of poppy petals, and, having recently visited the poppies at the Tower of London, made it all the more poignant. 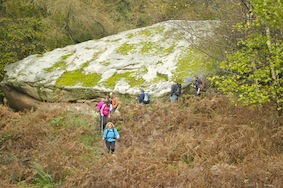 Descending past the Suck Stone we gathered pace on a wide forest trail before crossing the B4136 and continued to Monmouth. The recent rain had found its way into the river and the levels were quite high. Now the murky, brown water was flowing relatively quickly and was much more vocal. A long stretch of the path crosses fields of pasture before rounding a corner and heading back into the trees. We were all walking at a steady pace with a tendency to keep your eyes focused on the path at your feet. This strategy led to my demise as I did not see the low branch straddling the path. It stopped me dead in my tracks as my head thumped into the hard timber with a skin splitting crunch. I could feel the fold of skin peeled back by the impact and the slight oozing of blood. Fortunately the bleeding was not profuse and I was not in any great pain. My own stupid fault, just get on with it. My head began to feel a bit like the top of a tomato sauce jar with the seal on the lid broken and messy tomato ketchup coagulating around the opening. 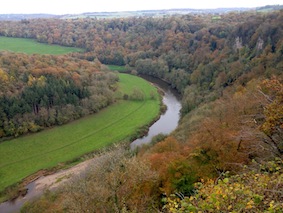 The River Wye from the look out

The sunshine of the morning had gone and the clouds were building for the expected rain. I was quite keen to get back before it came and certainly before the car park barrier was locked at 5.00pm. There was no reason to linger on this stretch of the walk and so we made good progress, getting back ten minutes before sunset and just as the rain began to fall. Good timing.

It is an excellent twelve mile walk through varied countryside, and one which could easily be repeated according to the seasons in order to gain a different perspective and emphasis each time. Shame about the cafe and the lack of tea and cakes at the end.