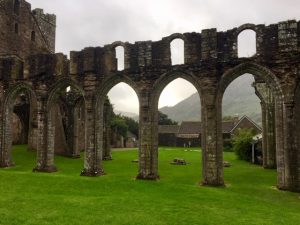 You may be forgiven for not turning up for this walk. A long spell of heavy rain and high winds battered the area throughout the night, with warnings of flooding on many rural roads. The forecast for the day was also very off-putting. So I was not surprised when there were only three of us gathering in the car park at Llanthony Priory at 10.00am.

As we climbed up out of Llanthony, heading for the beer track, the raw sound of motorbikes surged up the hill after us. There was a scrambling event on a nearby field, and with the rain of recent days, not least the last twelve hours, it was going to be a very slippery affair with lots of throttle. It was an all consuming noise and followed us all the way up the beer track, only disappearing as we dropped over the summit ridge on to Offa’s Dyke. 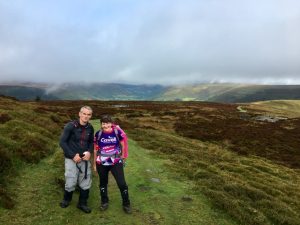 The cloud base was at about 600m and the varying shades of cloud and patchy light were much easier to appreciate in the flesh rather than via a camera. With the exception of two walkers who came towards us from the south, we had the whole ridge to ourselves, and the rain held off.

I was a little nervous about finding the right line of descent into Cwmyoy. Despite there being a cairn, a marker stone and a path all pointing in the right direction, the path soon fizzles out and you have to start making it up as you go along. When I tried it earlier in the week, I ended up wading through deep, wet bracken. I wanted to avoid repeating that experience. So we picked our way down, seeing where we wanted to get to, via runnels of water and sheep tracks. Annoyingly, looking back you can see the path clearly carving its way up the hill. How it cannot be seen at the top of the ridge is incomprehensible. 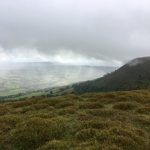 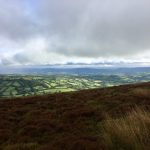 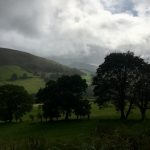 The outcome was that we reached the path we wanted just as a shower of persistent drizzle came upon us, enough to require at least a waterproof jacket.

From then on it was all plain sailing down to the rocky knoll overlooking Cwmyoy. There, on the summit, we found a little hollow offering us some shelter from the increasing wind, which had, by now, blown the drizzle away, and enjoyed lunch. 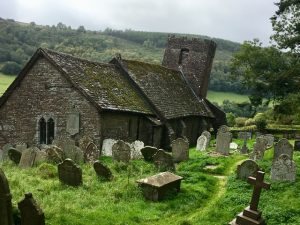 You can’t really do this walk without visiting the higgledy-piggledy Cwmyoy church, a victim of landslip and subsidence. Two large buttresses hold up the tower, which leans at a precarious angle. Like a double decker bus, how far can it lean before it falls over? Inside the church there are no horizontal surfaces. Pews slope down from the aisle in the middle. The window behind the altar slopes one way while the altar slopes the opposite way. Also, interestingly, there are no tell-tale cracks in the walls to suggest there is anything wrong. They must have done a great job patching up any imperfections. 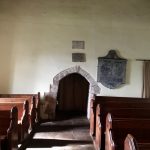 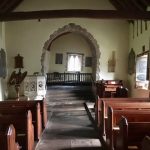 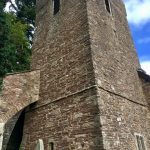 From Cwmyoy, we dropped to the floor of the valley, crossed the river and the road before climbing up to a forest track that contoured all the way back to Llanthony. Long before we reached our final destination the noise of engines cut through the trees. It was so loud that we were sure that they were heading our way along the forest track. This noise had been going on for at least six hours. Meeting an elderly local man walking his dog, I made a remark about the noise, expecting him to have a moan. On the contrary, he said it was only one day in the year.

A welcome pint was waiting for us in the cellar bar of Llanthony Priory. Beyond the noise of the scrambling, it had been a quiet Sunday in the Black Mountains – we had only seen three other people in the 10.4 mile walk.