We lazily drove east through the mountains back towards Christchurch, taking diversions to either side of the main road to have a look at anything interesting.  The weather was not so good this morning but gradually improved as we headed east and out of the mountains 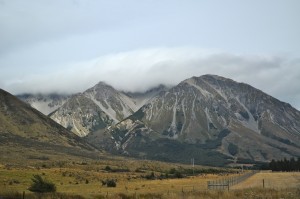 The mountains in this area are not as attractive as those we encountered further south.  There are fewer trees and many of the open slopes are of scree, rather like a quarry.  In the winter skiing is a popular activity and I guess the mountains look much better with a covering of snow.  There was no evidence of it being a popular ski area; no drag or chair lifts, no alpine styled villages.  I don’t know how significant an area it is but the skiers must have to work hard without lifts. 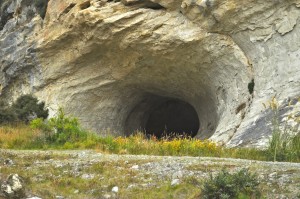 An almost perfect circular entrance to the cave

One of the detours took us to some caves with groups of school children all geared up to go caving.  The Broken River has carved its way through a band of limestone allowing groups of pot holers and cavers to start at one end and emerge an hour or so later out of the other.  I suspect there are other cave systems in the area, perhaps of a more serious nature and not suited to school groups.

Reaching Christchurch around lunchtime we still had some time to kill before we could check in to our accommodation and return the car, so we spent some time at the Antarctic Exhibition near the airport.  Entry is quite expensive but, like the other museums we have spent time in, it is well worth it.  There is a lot of information to absorb but also a number of fun activities.  What is it like to be in an Antarctic storm?  Donning rubber overshoes and a padded jacket you can experience a storm in a special room.  The ambient temperature in the room is -8.  Once the storm starts the winds go up to 42kph and the wind chill drops the temperature to -18.  I don’t think they make it as bad as it gets.  As I was wearing shorts, I found it a little chilly around the legs.

Quite a lot of the emphasis is on penguins.  Did you know that the name penguin comes from the Welsh pen gwin (I think that is the correct spelling) meaning white head?  In the penguin enclosure they have blue penguins.  Today we could see them clearly, unlike the other evening when we watched them come ashore on Pilot Beach in the dark.  They are really small.  These at the Antarctic Centre have all been rescued and have some physical defect, a damaged flipper or impaired vision.  In the wild they would have perished. 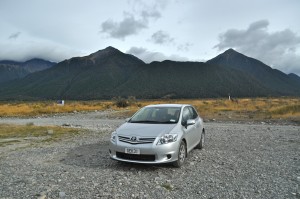 Our friend for the last three weeks

Having checked in to our motel it was time to return the car.  There was something symbolic in doing this.  It not only took away our freedom but signified an end to our travels around South Island.  It isn’t the end as we take the scenic train to Kaikoura in the morning and have some more adventures to experience before we leave the island.  I have said it before but driving here has been a pleasure.  The other thing that has been most noticeable while travelling around is that there is no litter at the sides of the road, in picnic areas, anywhere.  It is not in the culture here to drop litter.  I wish it were the same at home.  Handing the keys over, nobody wanted to check I hadn’t pranged the car or check that it was full of fuel.  I felt guilty that it was not very clean and that I had put nearly 3000km on the clock.  It is very pleasant to feel trusted. 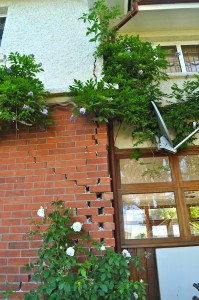 A typical sign of damage to thousands of properties around Christchurch

Without the car we found ourselves buying a Thai take away from the most bizarre establishment.  We ordered our food from a small caravan and the food was prepared in a converted shipping container.  There had been a building there but the earthquake had destroyed it, so they used their initiative and have made it work for them. Driving earlier, and subsequently walking in the area around our motel, there are very few properties that have escaped any sort of damage.  Many properties appear to be abandoned and gaps appear where buildings once stood.  Travel is disrupted around the city as new sewers and drainage systems are being installed.  It is going to take years for Christchurch to recover.

The full significance of the Christchurch earthquakes is only just beginning to register with the anniversary recently celebrated.  We saw part of a new DVD showing the devastation at the time and the ongoing suffering and repairs.  Our taxi driver had been forced out of his previous carpet import business in the city centre and his home had been destroyed too.  Consequently he is taxi driving to make a living.  The heart of this city has certainly been ripped out.