Here we go again! It has taken me about six days to recover from the journey home from new Zealand and now I am off again.  This time the flights are a little more acceptable with 3.5 hours to Istanbul and a further 5 hours to Bishkek.  I managed to sleep (loose term) for most of that five hours.  It was still dark when we landed at 5.35am but it was very light by the time we emerged from the airport with our newly acquired, $100 visa.  A thirty minute journey from the airport took us into Bishkek.  A fiery, orange sun blazed just above the horizon to the east, casting a warm glow on to the snowy mountains to the west. 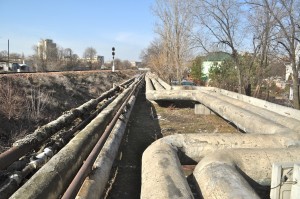 The hotel, Asia Mountains, is very reminiscent of hotels in Austria during the 60s – lots of pine furniture and artwork made of leather adorning the walls.  We had a breakfast of cold meats and cheese in the dining area, whose centre piece was a huge, unlit, open fire with chimney above.  Opposite the hotel is the only railway line in Kyrgyzstan.  Hardly anybody uses the railway, just the very occasional freight train taking coal to the nearby power station.  Running along the side of the tracks are some huge pipes encased in decaying asbestos.  These carry and distribute the state central heating from the power station to all the properties in Bishkek. 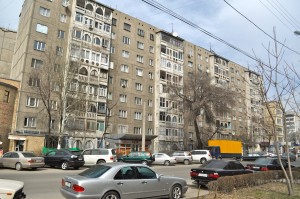 After a brief rest we met at 10.00 for a stroll into town. We had each been given a city map. The city is built on the grid system so is quite easy to get around.  The roads are wide and tree lined.  The trees help to hide our view of large Russian housing blocks looking bleak and run down.  I soon released I was seeing Bishkek at just about the worst time of year. Nature was still asleep after the winter, but the snow had gone, leaving everywhere looking bland, dirty and colourless.  I would not describe Bishkek as dirty though.  People were out in front of their houses and shops sweeping, clearing up the autumn leaves and making things look tidy.  There is very little litter at the sides of the roads.  Exploring the city it soon became clear that there are large areas of parkland available for public use and just behind the presidential palace there is a fun fair, not in great demand at this time of year but I suspect a family favourite in the summer.  Throughout the city there are irrigation pipes to water the grass and flowers during the relatively brief, but hot, dry summer.

Today is a celebration day of the first revolution which took place on the 24th March 2005. Kyrgyzstan is a new country, created following the break up of the Soviet Union.  The first president had already had two terms in office when he changed the constitution to allow him two further terms.  The people did not like it so they held a revolution.  It was peaceful and the president left and went to Russia.  Sadly there was a second revolution in 2010 which was not so peaceful and many people were killed, not particularly in Bishkek but in the city of Osh in the south.

Walking around Bishkek I got the feeling it is a reluctant capital city.  It is quiet.  Any noise is quite muted.  It has not been overwhelmed with consumerism; shops do not stand out and hit you in the face but are hidden behind fairly dull facades, almost embarrassed to show themselves.  Perhaps people do not have the money to spend and I am not sure what people do to earn a living.  When the Soviet Union lost control, many of the Soviet run factories closed down and remain, today, as a derelict symbol of the past.  Other factories have fallen into decline because they were owned by friends of the first president and people power has influenced their downfall.  Taxis line the streets but nobody seems to use them very much so taxi drivers hang around waiting for custom, looking bored and dejected. 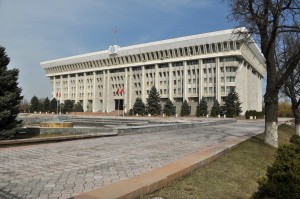 On either side of the main street, Chui Avenue, there are some large, stolid buildings left over from the Russian era.  They cannot be described as beautiful but imposing monuments to power over people.  In front of these buildings are dramatic statues depicting heroic struggle.  At least the sun was shining, casting a warm light over these austere buildings under a clear blue sky.  I expect when we return towards the end of April we will notice a difference; nature will have woken up and there will be more colour. 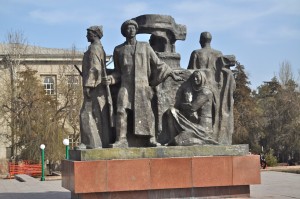 One of the many statues in Bishkek

Towards the end of our stroll, when tiredness was beginning to set in, Chris suggested we take a look at the ruins of the wattle and daub Pishkek Fort, destroyed by Russian artillery in 1861.  That is what it was, destroyed!  There was nothing to see.

By the time we returned to the hotel we had been walking the streets for almost six hours.  It was time for a rest before dinner, followed by a long night’s sleep to catch up.