Leaving Rotorua we headed north towards Auckland.  Before leaving we emailed our new Kiwi friends in Cambridge to see if they were around for a quick visit.  Unfortunately we caught them when they were away so nothing could be arranged.  Nevertheless we stopped off briefly in Cambridge and strolled among the Sunday street market before continuing our journey.

Again we were tempted by a deviation to Raglan on the west coast.  The journey was very pleasant through varied countryside but Raglan turned out to be a bit of a disappointment.  It has a reputation for being a surfer’s paradise but we could not find our way to the coast, other than that of the large inlet, which struggled to muster a ripple, let alone a wave.

Reaching Auckland, we found our chosen motel without any difficulty and, once settled, wandered into the Newmarket district to find food. 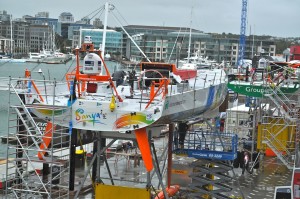 Round the World yacht maintenance

The Volvo Round the World yacht race arrived in Auckland on Saturday night so we decided to start the next day by heading down to Viaduct Quay to soak up the racing atmosphere.  It is all a bit of a circus, with various attractions to entertain and educate us about the race.  All the yachts were out of the water and stripped down to the hull so that maintenance crews can work on every inch of the hull and the rigging in preparation for the next stage of the race, which recommences next weekend.  In addition to the yachts involved there were some superb vessels in port, all oozing money. 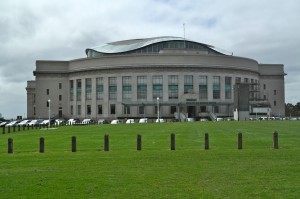 The impressive War Museum in the Auckland Domain

Angela was keen to visit some galleries and museums while I wanted to have a go at the New Zealand Coast to Coast, a mere 16km urban crossing.  I enquired at the i-site for details and they were only able to give me a very basic photocopied map, which lacked a lot of detail and was of such a minute scale, it proved useless.  We split up and I set off full of hope but soon, not only found the map very inadequate but also realised the path had not signage at all.  I also, quite soon, found myself going wrong and receiving duff information from well-meaning people I asked.  I spent rather too long wandering around an area called the Domain, a mixture of parkland and woodland.  After over three hours, I had walked quite a distance but had only achieved a fraction of my target and knew that I was going to run out of time.  I went back to the motel and waited for Angela.

In the evening we went down to Viaduct Quay for dinner.

Our last day in New Zealand proved to be a scorcher so we decided to escape the city and take the ferry over to Waiheke Island, a forty-minute ride across the Hauraki Gulf.  It is a beautiful island with many quiet bays, vineyards and stunning houses belonging to affluent Aucklanders. 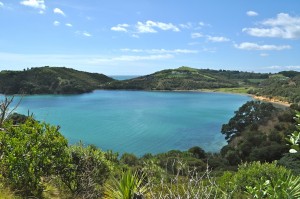 We walked up grassy track, through woodland and down grassy tracks to Owhanake Bay, a stunning inlet with a narrow deserted beach.  One or two of the rather special houses overlooked the bay.  It was hot.  I was hot.  It was too good an opportunity to miss.  Not having really planned this trip, or given it enough thought, I did not have anything to swim in.  The temptation was too great and, what the hell; I skinny dipped.  The water was beautiful.

Refreshed, we walked over to Oneroa Bay, a sweeping sandy bay, which was a little more populated and overlooked by a number of shops and cafes.  We found one that offered wine tasting.  Another opportunity too good to be missed. 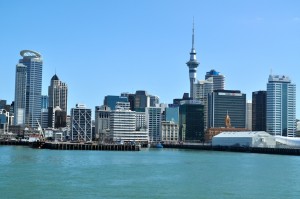 Catching the ferry back to Auckland we relaxed in a bar in a quiet square still bathed in warm sunshine despite being surrounded by city centre tower blocks.  Before returning to our motel for last minute packing we found a superb gastro pub for our final gastronomic Kiwi delight.

All good things must come to an end!

Auckland always appeared, in my imagination as a modern, magic mix of cultures and true enough we have found it such.

I spent 2 hours at the Art Gallery, which is a renovated building, re-opened in Sept. 2011.  It is something of an exhibit in itself.  The roof throughout is held up by beautifully carved wooden ‘trunks,’ which spread out above to mimic palm trees.

A charming art student, Katie, gave 4 of us an introductory tour.  There are just enough galleries to last an afternoon’s visit.  I was keen to see the home-grown art from the recent past; Victorian classic oil paintings thru to Maori tattoos and sketches.

I visited the Sky Tower and marvelled at those who want to jump from the top!

Finishing the day with a bit of souvenir shopping I was ready to flop at the motel.

Our last day has been a memorable one from all angles; wonderful weather, a ferry trip to a quiet beach, wine and great food.  We fly out tomorrow having had a remarkably varied visit and the lure of a return is alive and well!